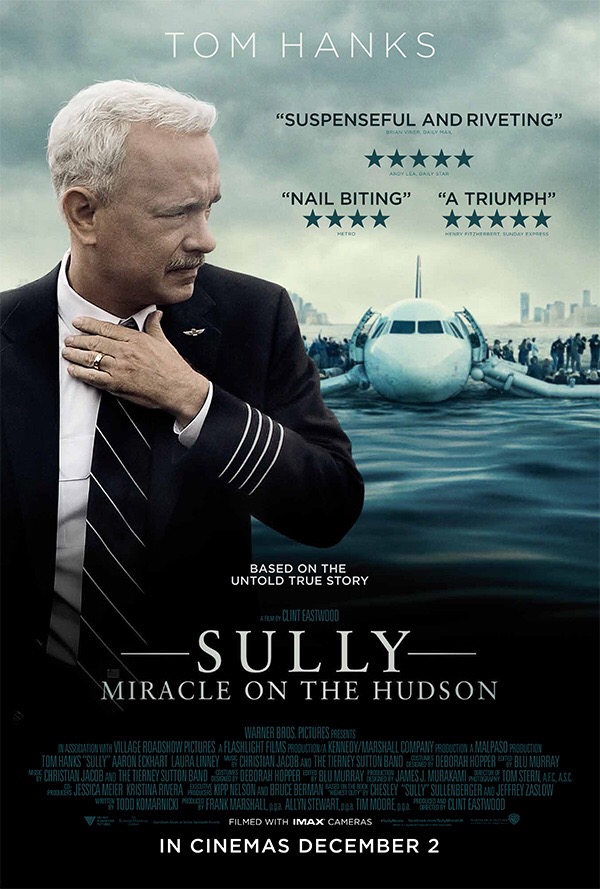 I am sure you will all remember the landing of the plane in 2009 in to the Hudson River through the quick thinking of  it pilot Chelsey Sullenberger.

This was not a film I was rushing to watch, but I am on holiday and it was available so gave it a go.  I was worried that it would be some over dramatisation of the whole event, with a love story worked in and maybe a sick child to pull at the viewers heart strings but I have never been so happy to be wrong.

This film walks through the events of that day, several times over, as it shows you the other side of how we as humans like to treat those deemed as heroes.  If ever anything could show we have gone red tape crazy, this film does it.

It’s incredible the amount of investigation and simulations that went in to the unpicking of what happened, and the way it made “Sully” feel.

I am just going to say it… I’m not the biggest Tom Hanks fan, but he did an ok job in this film.  I find he just acts the same now in every movie he is in, and there was no particular passion in this role, especially when trying to prove his point about why he made the decision to land in the Hudson over 2 of the nearby airports.

I find the depiction of Sully’s wife in the film really cold.  Considering her husband just saved a flight full of people, crew etc. She was particularly insensitive to the media attention and “trial” Sully himself was going through.  Maybe this is how it really happened, although I would like to think if my nearest and dearest landed a plane and saved 155+ lives I might have cracked a smile at the fact that he was alive.

The filming and simulations used are very good as well as the CGI of the plane landing.   This part of the film I can’t fault really.

Overall this film is worth a watch, even if it really isn’t your thing as if nothing else it is an eye opener to the quick thinking of this incredible pilot.