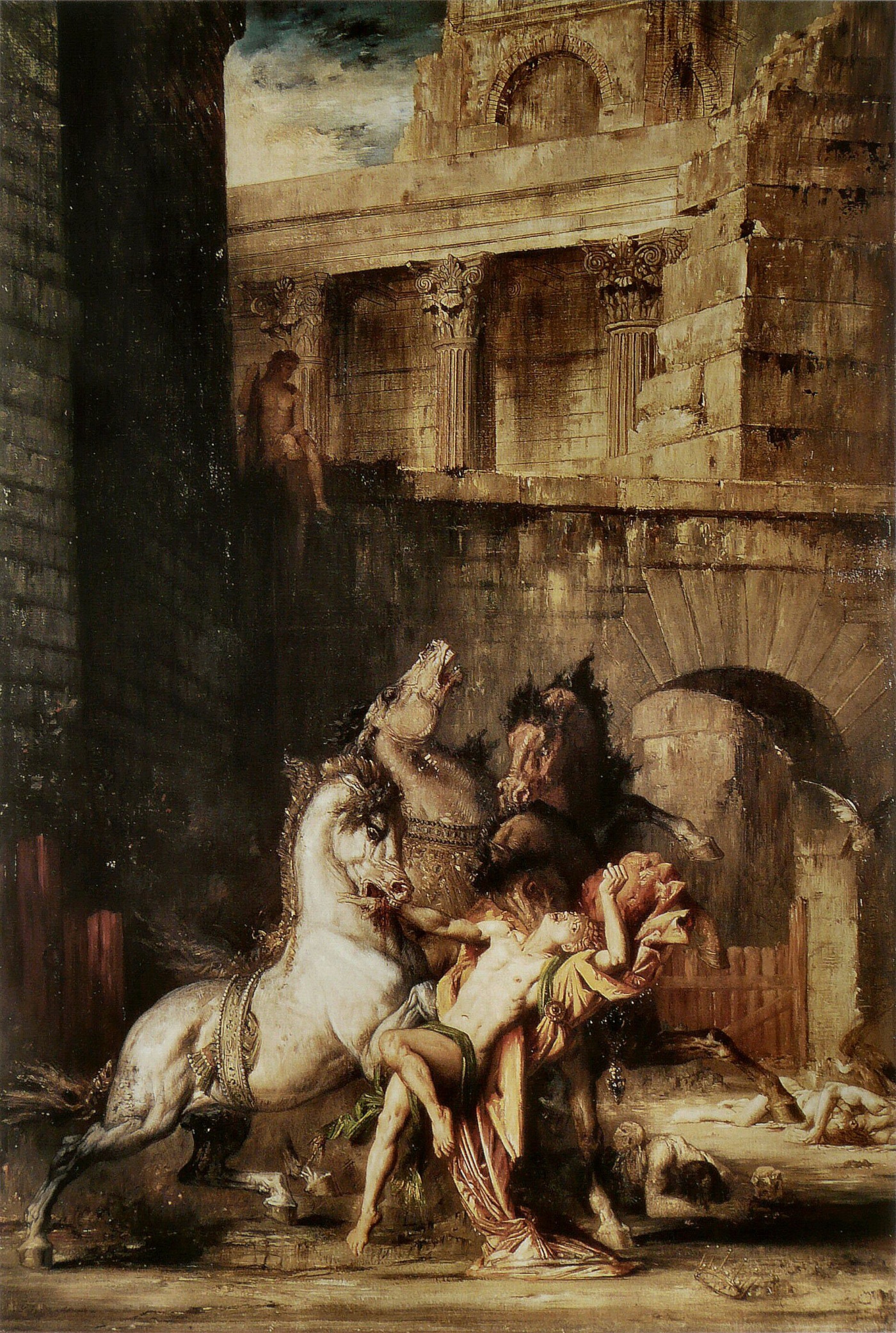 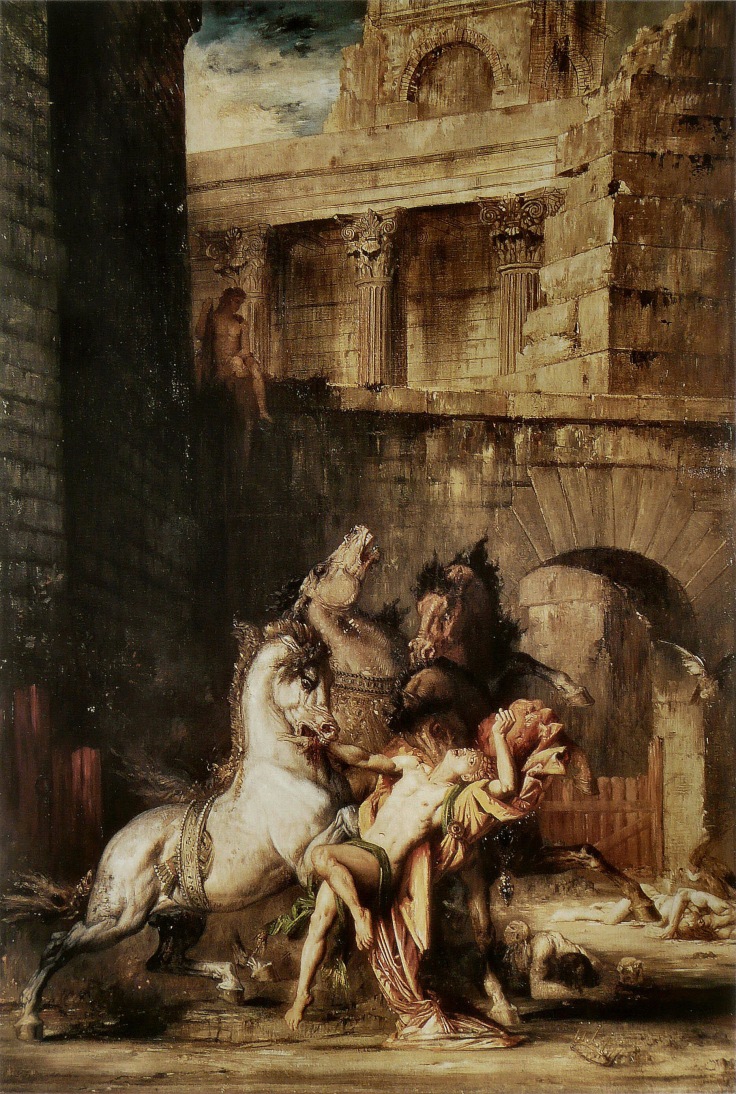 Today I thought I would have a look at the roots of abstract art.  I know…this painting doesn’t look abstact in the slightest…more renaissance or romanticism, but Gustave Moreau saw his work very differently.

This was painted in 1865, Moreau broke away from that styles of those around him, reconciling the expression of his own ideas to that of a conceptual and more universal language.   In later works Moreau took an increasingly abstract approach, moving away from his peers of his time.

The scene that is laid out in this picture is that of the eighth labour of Hercules.  This particular challenge was for him to retrieve the flesh eating horses of Diomedes.   The labours were set for Heracles as a punishment for killing his own wife and children in a fit of madness which that sneaky goddess Hera had orchestrated.  On coming out of the madness Hercules was devastated by his actions and prayed to the God Apollo for guidance, he was then told via the Oracles that he has to serve the king Eurystheus for 12 years.  As the 8th labour Hercules was told to get the horses and bring them back to Mycenae.

Heading off, Heracles drops by on his old friend Admetus, but on arrival he finds that the house hold is in mourning.  Ademetus lies, saying that it was the death of someone unimportant, but as Heracles indulges in the hospitality of the house, the servants look in appalled and eventually Ademetus tells Heracles the truth, that his wife has died, but before her time, taking his place.  Heracles, feeling the pangs of guilt and remorse storms off in to the underworld and battles Thanatos to bring home Ademetus’ wife.

Leaving his friend, Heracles performs a surprise attack on the stables where the carnivorous horses are kept, overthrowing the stables and taking the horses.  On his return to Mycenae, Diomedes has his own surprise attack on Hercules, and wanting to head in to battle, he leaves the horses with his friend Abderus while he defeats Diomedes.  Heracles is triumphant in the battle, and on returning to collect the horses finds that they have eaten Abderus.  Offering the horses the body of Diomedes they eat it and become tame as their master as been vanquished.  Heracles brings the horses to Eurystheus, and goes on to build a city in honour of Abderus.  But what happened to the horses????  I hear you screaming at me, well, they were released on to mount Olympus.  Due to their reformed personalities they were killed by the wild animals that lived there.

So why have I gone in to so much detail over the Greek myth for this particular painting? Because to truly get to grips with this picture, you as the audience need to know the facts, which then brings the painting to life.  We see as the central focal point the 3 horses eating the body of Diomedes.  His crown fallen to the right foreground of the scene.  There are dead bodies in the court yard that the scene takes place in, these are victims of the horses and not bodies fallen in battle.

The horses are adorned with the Royal wears and look violent, while the kings body looks pained and defeated, although at an awkward angle to the horses as his body is flung around by them.

In the background we see Heracles looking on, sat on the wall.  Serene and his vision downcast, in rememberance for his friend and lost family.

It is said that this painting was a homage to Da Vinci and Michelangelo, in the detailed scenery and the anotomically correct form of the horses and people, their muscles painted in movement and well defied in the tension and pressure that they hold.  The homage recognises the advancement of these two artists being more advanced in their studies of the human body than doctors of the time, using cadavers to understand how the human body worked.

So why is this heralded as a piece of abstract art? Well… firstly unless you are told the title of the painting, it is easy to assume that the subject matter is actually a guy being trampled to death by deranged horses while a really unhelpful guy looks on from the wall.

There is an element of absurdity of the piece, as the story of flesh eating horses, especially those who would go out of their way to eat flesh is not a digestible concept in normal everyday life, though accepted in mythology as it is just that….myth.

Moreau’s technique masks the unusual theme with a classical air bringing this myth to a universal audience (lets remember the timing of the work, lots of people would not have learnt to read and would have relied on visual representations for story telling).

I like this piece as a forerunner for Moreau’s later work where the classical definitions were abandoned for bolder brush strokes and less refined central focuses.

One thought on “Diomedes devoured by his horses – Moreau”