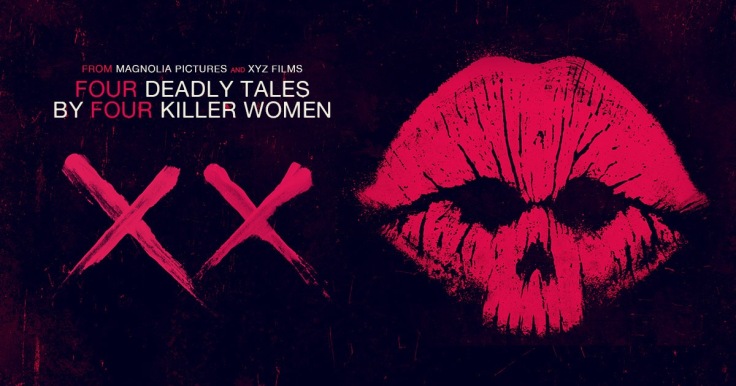 This film has some seriously mixed reviews…so of course I had to check it out for myself.  Especially as it has just cropped up on Netflix.  Spoilers are in this article….if you plan to watch maybe wait until after you have watched it to read this.

This is 4 “horror” scenarios wrapped up in to one film.  This is directed by women on stories that center around the female as the main protagonist.  I can feel feminists everywhere commenting already.

The four stories are wrapped together with some intriguing if not odd stop graphic animation and while this part really appealed to me the message was a little mixed and easy to miss.  It has a dolls house, which in my opinion represents the mother and “center” of each section of the film.  The dolls house seems to travel around trying to fix and hold together things around it.  I think some of the moody movements were supposed to represent a mothers pain, but it’s very sketchy, but well animated in this technique none the less.

This starts on a train, a mother and 2 children are travelling home, when the inquisitive son asks the guy sat next to him the immortal words of 7….what’s in the box.  The stranger lets the child look in the box and he becomes subdued, the stranger explaining it’s a gift, then quickly dives off the train at the next stop.  From here, the boy starts to refuse to eat, turning down food at every opportunity.  The mother…really doesn’t seem too bothered.  The boy then shares why he isn’t eating with the girl, she in turn stops eating.  Finally the father gets the boy to tell him, and he then stops eating too.  There is a scene which I gather to be a dream where father and children are eating the mother while she is still alive, carving pieces off of her leg at the dining room table as she lays there smiling.  Sadly she was fine in the next scene which was Christmas Day, where the father and children appear emaciated.  The mother remembers the box of the stranger and asks her son what was in it, to which he responds, nothing.

Just after Christmas, kids and father die…such will happen when you refuse to eat I hear, and the mother goes in search of the man with the box.

This section, is really under played and the time lines mixed up, which doesn’t work in such a short time frame.

This section directed by Jovanka Vickovic and with leading lady Natalie Brown, really needed a bit more life pumping in to it.  The mother, I felt needed more concern and possibly have the relationship with the children built up more, then their ambivalence towards her would have felt like more of a dramatic change in her children’s behaviour.

Melanie Lynskey appears in this one, and directed by St. Vincent.  It’s Lucy’s 7th birthday and Mary is trying to create a special party for her.  It’s the talk of the neighbourhood, so imagine her dismay when she finds her husband dead in his home office.  Instead of doing what normal people would do and maybe postpone the party and call the police, she decides that the best thing to do would be to hide the body from her daughter and the nanny.  Frantically trying to move him around the house she is constantly disturbed by her daughter, the nanny and the next door neighbour who feels begrudged as she hasn’t been invited to the child’s birthday party.

Eventually a singing panda gram (I know….apparently it’s a thing) turns up and Mary buys the panda suit from him and dresses her dead hubby up in it.  Placing him at the table where the party food is.  The party gets underway, and the inevitable moment where the birthday cake is placed in front of the panda, as everyone sings happy birthday the panda collapses in to the cake, and as the next door neighbour tries to move him out of it the head comes off revealing Lucy’s father’s dead body and scaring all the kids.  This is when the full title of this section is revealed as the birthday party, or, the memory Lucy suppressed from her seventh birthday that wasn’t really her mom’s fault (even though her therapist says it’s probably why she fears intimacy).

This verges on the edge of absurd and not in a good way.  Lynskey plays a jittery idiot and the bright colours in this section are a contrast to the previous, but makes it feel as though the director is trying to underplay the horror element of this try and make it comical, but that doesn’t work either.

Directed by Roxanne Benjamin and staring Breeda Wool and Angela Trimbur. Four friends are on holiday together out in the desert.  We find out Gretchen is afraid of heights when they are stood on a rock face.  They find some hetroglyphs depicting an evil spirit, before they set up camp for the night.  Gretchen is attacked by a creature that looks like the spirit in the painting and it then takes to wearing her skin.  The creature then swiftly kills the two men and the other female in the piece breaks her leg while trying to run.  The piece ends with the creature leaping off of a high cliff to kill the other women.

Succinct is probably the word for this one.  The content to me was pretty dull and I was fairly pleased it was over quickly.

Her only living son

Now I don’t know if the title indicates that she had other sons and they weren’t living, but it’s never alluded to in the script.  Directed by Karyn Kusama and Christina Kirk plays Cora, the life beaten mother of Andy, a rebellious bully of a kid who is turning 18.  He has a Manson like charm about his and when he pulls a girls finger nails out at school, the teachers are fine with it, indicating he has persuaded them that it was the right thing to do.

It transpires that Andy isn’t really the son of her ex, but is actually the spawn of satan, as his voice changes and his hands and feet grow claws and get hairier.

Andy forces his mother to bow down and crawl to him, and the script almost alludes to the fact that this is Rosemary’s baby type set up.  As Satan comes to collect his son, Cora tells Andy it’s his choice and hugs him, he hugs her back and they crush each other’s ribs and die in each other’s arms… fun times all round.

This is kind of filmed like a teenage melo drama with drab sets and visits to the principles office.  Once again the women has a weak personality and just seems to be walked all over only to find a very small element of her back bone just to get it crushed.

Overall this film could have really been great, sadly each section just missed the mark.  I was hoping for some strong female characters and a bit of arse kicking, but in each scenario the women just ends up alone or dead.

If you were looking for a film that highlighted female directors talents….this isn’t it.  I think they have all done themselves an injustice, which could have been stopped if they just took their films and made them as one offs rather than trying to make a poor substitute of the ABCs of death.