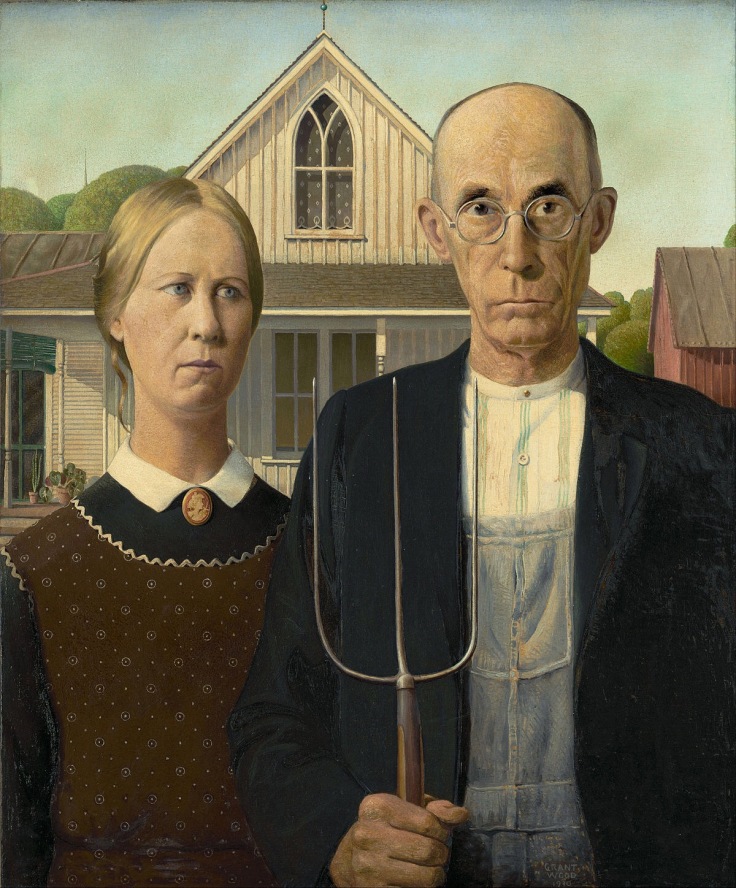 I am sure you all know this picture. The bright pristine house, with the surly looking couple in front of it. Nothing much to see here right? It’s just some farmers in front of their house, so why is this picture so well-known and so captivating?

American Gothic on the face of things seems like a regular Iowan setting, encapsulating the life of the farming community. So why would Grant Wood take the time to paint this?
Firstly I think it is important to know that this picture was painted in parts. The house captured Wood’s eye when travelling through Iowa, and he took a quick sketch of it to use at a later date. The barn was not present in the view of the house that Woods sketched, but was added in. The couple, who are not really a couple, but were actually his sister and his dentist, did not pose together. They were painted in separate sittings. This means that this is a created reality by Woods and not a scene that was posed for, but a carefully orchestrated picture.
Woods is known for not commenting much around the meaning of his paintings, so as ever this has been analysed by every art critic and historian that has taken an interest in it.
There are so many theories which fly around about this picture, but as always it is open to your own interpretation. I will just talk about some of the theories and my own personal views.
Let’s talk about that window as a starter for 10. It seems ornate and out of place for this house. This could have been Woods trying to emphasis the oddness about the placement of this window as it sits centrally to the couple and is in the main focal point of the viewer. We could assume that this was an attempt to identify how proud the owners of the house are, and through some research I have found that windows of this nature were installed front and back of these types of houses to allow for furniture to be moved in and out of the house without it having to be dragged up and down probably very narrow stair cases.
To me, this does look like a church window though, which is a potential reoccurring theme in this painting. The widow replicating gothic architecture of European churches and cathedrals and is a style which is known to accentuate light. This is then odd when you consider that in this particular painting the window has a net curtain hung at it to fragment the light.
I will come back to the religious vein of thought, but let’s move on to the plants on the front porch. The viewer can see a geranium and a mother in laws tongue, both thriving. These plants do run through Wood’s work, as they turn up in several of his paintings, identifiably in a picture that he painted of his mother. Geraniums, within paintings (don’t worry I am not saying that if you have geraniums in your garden this will be a symbol that things are not well with you), are representatives of melancholy and the mother in laws tongue, is thought to represent the hardiness and adaptability due to the plants tough nature and ability to survive even the worst conditions and treatment. Note here how the geraniums mirror the shape of the trees in the back ground and how the mother in laws tongue mirrors the shape of the pitch fork.
So now that I have skirted all around the couple, let’s talk about them. He is stern looking, isn’t he? This could be attributed to him being a no nonsense kind of man, the sort of hard-nosed gentleman that you would expect to see running his own home stead farm. He appears to be in his Sunday best jacket and shirt with a clean pair of overalls on, but holding a pitch fork. In preliminary sketches, he was holding a rake, so the change in implement would not have been done lightly. We can see the replicated shape of the pitch fork in the overalls.
There are a few strains of thought around the man in this, one that he looks like a man of the cloth.  The black jacket and grandad collar shirt, making the audience recall images of stern vicars. There is also the theory that he is some form of demon on earth.  The pitch fork a representation of Hades as this was his weapon in Greek mythology.
The women, much younger than her counterpart, has a look of distain or maybe fear.  Woods himself said that they were supposed to be father and daughter, but Woods had a wry sense of humour and could have said this to throw critics off the track of his true agenda of this picture.  The cameo brooch that she is wearing is the profile of Persephone, the goddess of harvest, which if you know your Greek mythology, she was kidnapped by Hades when he took a liking to her and dragged off to the underworld.  This sits very comfortably with the images of the man in the picture having a link to Hades himself.

There are theories about the loose lock of hair being an indication that a forced tryst has happened between the two before the picture was painted which is why she is looking at him with the emotions displayed.

If we track back to the theory that she is his daughter, this could be the look of wanting to break free from her father, perhaps for a life more glamorous than on a farm.

I think you can see that while on the surface this picture looks like nothing more than two people and a house, the imagery and symbolism Woods has used, draws some strong links throughout the whole painting.

What do you see?  Is there another meaning for you? Why not tell me in the comments?