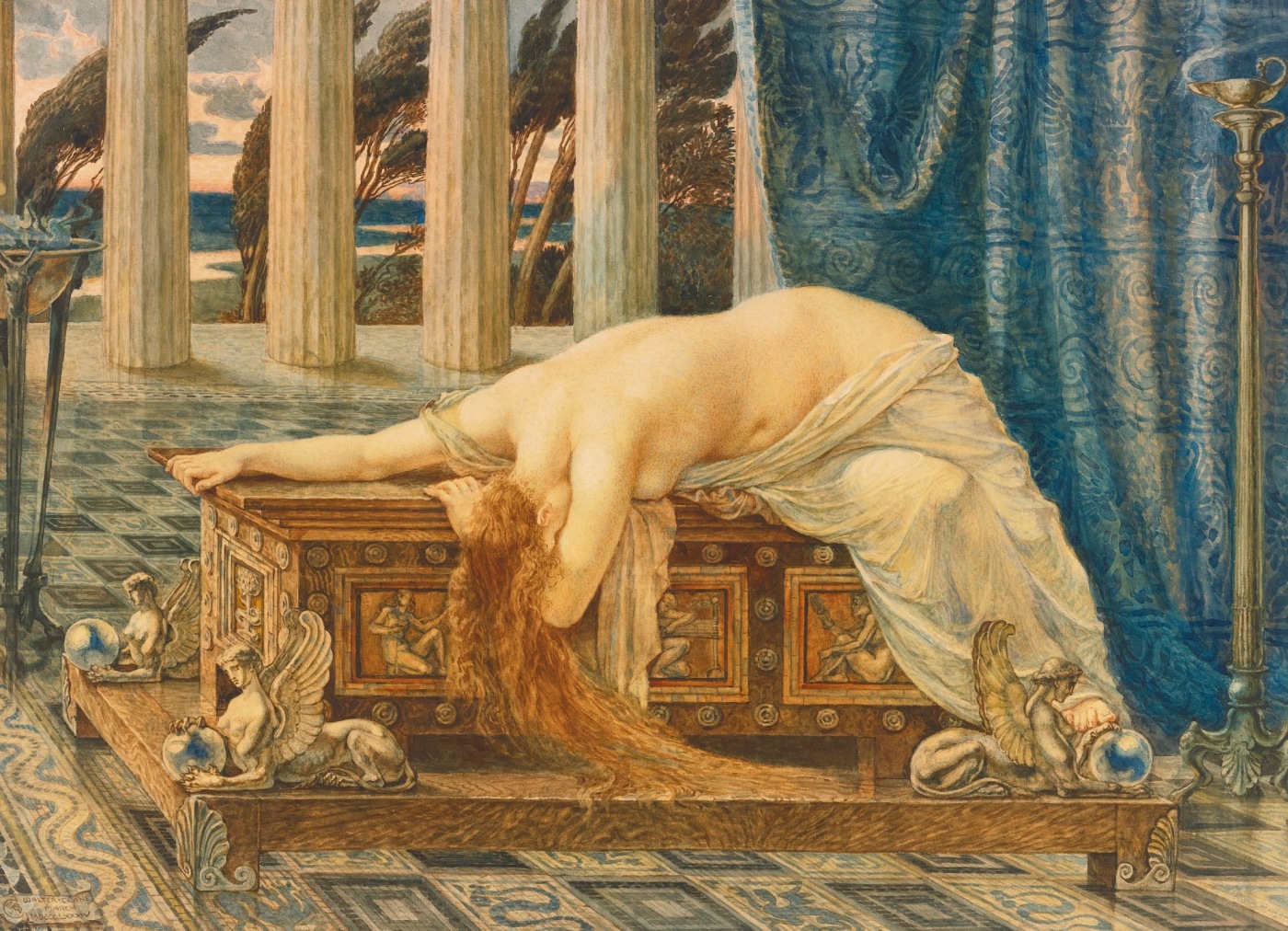 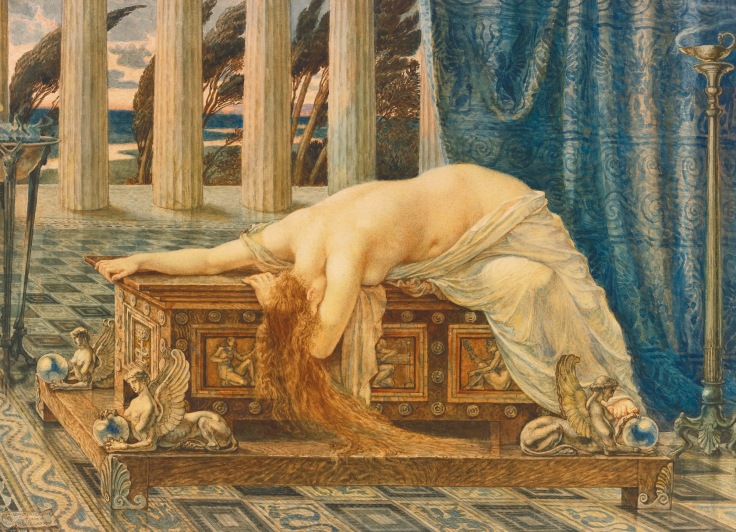 Don’t you hate it when you do something stupid and there’s no way of fixing it? Broke your mothers vase which had deep sentimental value, drank that rare bottle of whisky to find out that it was worth a small fortune… Pandora was having one of those days.

Walter Crane was a bit of a jack of all trades in the art world, working in several different mediums, but this particular painting is in water colour.

Pandora, was the first women put on earth by the Greek gods, she was created under the order of Zeus after the titan Prometheus stole fire from him to help mankind.  Hephaestus got to work making her out of the earth and water.  She was then blessed by the other gods with many gifts such as beauty, grace, desire and charm from Aphrodite, Hermes gave her cunning, a deceitful mind and a crafty tongue.  She was bestowed a necklace from Poseidon made of pearls that would prevent her from drowning, Apollo taught her to play the lire and sing.  Zeus made her mischievous, foolish and idle and Hera gave her the most important gift in the story…curiosity.

Now Pandora had been created, not just because Zeus felt that the men of the earth needed a play mate, she had been created with a purpose.  Zeus not happy with just punishing Prometheus, the titan with the gift of fore thought and trickery, because he had tricked the gods many times in his efforts to arm man against the vengeful gods, wanted to punish his brother Epimetheus.  Epimetheus, the titan “blessed” with after thought, was sort of known as the idiot titan.  Zeus had Hermes deliver Pandora to Epimetheus, and of course he fell in love with her.  How could he resist her with all the gifts that she had been given? Even the name Pandora means all gifted…what could go wrong?  Along with Pandora, a beautifully crafted gilded box was delivered, another gift from Zeus, but it came with an explicit warning that she must never open the box.

Zeus was extatic that his plan was working and delighted over the news that they were to wed.  The news of the wedding came quickly as Epimetheus didn’t put much thought in to what could happen long term and he was besotted with her.  This meant that Zeus could put his final part of the plan in to action.  Now before Prometheus had been captured by the gods and stuck on a rock in chains for an eagle to eat his liver every night for all eternity, he had told Epimetheus not to accept any gifts from the gods as they were pretty mad at him and they would try and seek their revenge through his brother too.  Epimetheus promptly forgot this warning.  Hermes attended the wedding, and told Epimetheus that Pandora was a gift from Zeus, that this was his way of saying that there was no more ill will between the gods and the titans.  Hermes also told him that the box was a wedding gift.  Epimetheus was kind of gullible and believed this.
A few days went by and the couple were living in wedded bliss, but Pandora’s mind kept wondering to the box, she would find herself wandering past it, running her hand along the top, but each time she reminded herself that she had vowed not to open it.  Finally her curiosity got to much and she decided that she would open the box and just sneak a peek when no one was around.  She was hoping for money or jewellery (or at least a pair of Jimmy Choos).

Finding herself alone, she took the gold key that hung around her neck and unlocked the box, lifting the lid a little way.  Soon after a hissing sound emanated from the box and a terrible odour.  Slamming the lid down, she was too late.  She had unleashed all of Zeuses vengeance on to man.  Zeus had locked in the box, death, disease, turmoil, strife, jealousy, hatred, passion, famine…the list was endless.  This spread throughout the earth quickly and without mercy, meaning men were no longer immortal and the revenge of Zeus was complete.  As Pandora sat in front of the box, she felt the weight of the worlds woes on her shoulders, the beautiful box now turned in to something ugly, the guild work destroyed.  She realised that she had been created as nothing more than a pawn in the battle between gods and titans and she had been delivered to extract Zeuses ill will.  She then suddenly felt a warmth, shrouding her like a blanket, this was hope.  Zeus had locked one good think in the box, which meant that man would never give up, and would give him determination.

In Crane’s picture, we see Pandora at the point of releasing all the ills.  The trees in the background blowing in the ill wind and the lamps within her room blown out.  She is alone and distraught.  The box shown with sphinxes on each corner, showing the manipulation and deception that was held within.  The box itself showing men crafting in the reliefs, now having to find ways to defend themselves against what may come.  You can feel her despair, as she has not yet discovered hope. Her feminine form holding down the lid of the fated box.

There are sphinxes within the curtains and serpents and mythical creatures within the mosaic tiles on the floor as well, as if the whole room has been geared towards Zeuses purpose.

This picture really appeals to me for the emotions that it evokes.  That feeling in the pit of your stomach when you feel there is nothing left.