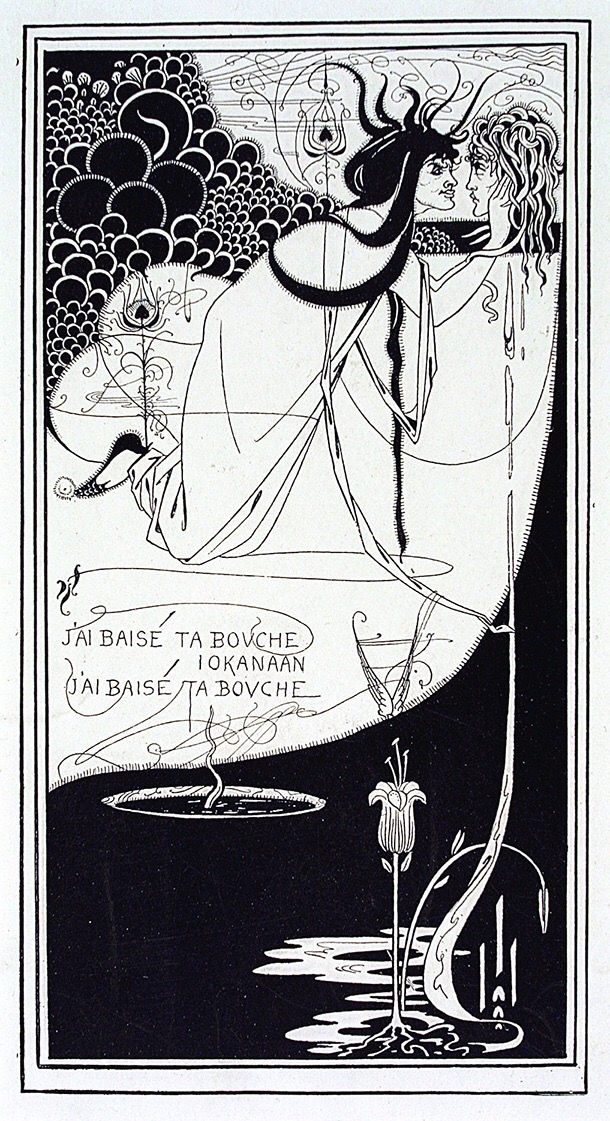 “Hell hath no fury like a women scorned…” any man will know this.  Notifiable women in history especially.  There are not many women documented that didn’t have some bone to pick.  Salome was no different.

Beardsley style is bold and definite.  This picture, created as one of a series which was commissioned to accompany the text of Oscar Wilde’s play “Salome”, Beardsley created the beautifully grotesque art novueau drawings at the tender age of 21.  The style itself  took its influence from Japanese woodcuts known as Ukiyo-e, which meant that they were easy to replicate for large productions at the time.  This style is demonstrated through the 2d imagery and composition of the arrangement.

Wilde’s reaction to the art work was initially enthralled, but quickly dampened on seeing the series dubbing the art as “like the naughty scribbles a precocious boy marks in margins of his copy book”.  In reality the Wilde was intimidated by the powerful mastery of the drawings as worried that the art work would over shadow his play making it just a sub text to the designs themselves.  Oddly it was the publishers who requested reworks of 4 of the pictures due to the nudity in them.

This comment sparked a retaliation from Beardsley, where he drew caracatures of Wilde in a derogatory light, but perhaps that is a subject I will cover in a different post.  For today, let’s appreciate Beardsley for his unique talent which drew oriental styles in to the English main-frame.

The Climax, shows the moment that Salome is in receipt of St John the Baptist’s head.  In a stark contrast to Judith (hopefully you have read my earlier post about Judith… if not you can find it here), who beheaded Holofernes to save her people, Salome does it as revenge.

Salome is attributed to be the girl who danced for Herod the great, completing the infamous dance of the seven veils.  In front of many guests Herod offers the girl anything she wants, to which she demands the head of John the Baptist on a silver charge.  This was as a direct result of her Herodias who was married to the son of Herod the great (also called Herod, name originality was lacking in biblical times), St John had disapproved of the marriage and as such Herodias was not amused, which in turn meant her daughter would reek revenge.

Not wanting to look foolish or like he would not give the girl what she had asked for, Herod the great saddened by the request, gives her what she asks for.  As the head is delivered, she kisses the lips of John the Baptist.

Beardsley’s interpretation of this moment is composed with intristic pattern detail, poignant to the overall feel of the work.  Salome floats in a stylised clouded sky, the white of the picture representing a crescent moon.  Beardsley trade make peacock feathers can be seen in the sky.  Salome herself has a harsh face and wild hair, which reminds the audience of a witch like qualities, especially as she is floating.  This can be attributed to the spell she cast over Herod through her dance, enabling her to gain her mothers desire.  Salome grips John the baptists head, looking dominantly in to his eyes, symbolising the power of the femme fatale.  The head itself has a cold dead stare, enhanced by the style that it’s hair has been drawn in.  Reminiscent of serpentine hair, the viewer is reminded of Medusa.  Blood pours from the severed head, on to a lily below it.  The lily being a symbol of purity, therefore the flower has been fed with the purity of St. John.

Beardsley captured so much within this picture, as it not only served the purpose of animating an act in the play, but also satirised the Victorian values regarding sex, going against the patriarchal society and extolling the recent gains in female superiority as the women’s movement had made waves for female economic rights and occupational/educational opportunities.

It’s no wonder that his work is highly recognised and celebrated as while the technique looks simple in its sole use of black ink, on further inspection it is deeply detailed not only in visual aesthetics, but seeped in meaning and political views.

One thought on “The Climax – Aubrey Beardsley ”