As I said yesterday, my visit to the London planetarium inspired me to chat about the story behind some of the constellations that you can currently see in the nights sky. As we all know, I love a bit of Greek mythology and this nestles beautifully between the world of science and myth.

Right now, in the northern hemisphere you can (if it's not cloudy…which sadly I live in the U.K. So it usually is) you can get some amazing views of the constellations Andromeda, Cassiopeia and Perseus. If you're interested this is what they look like in the night sky:- 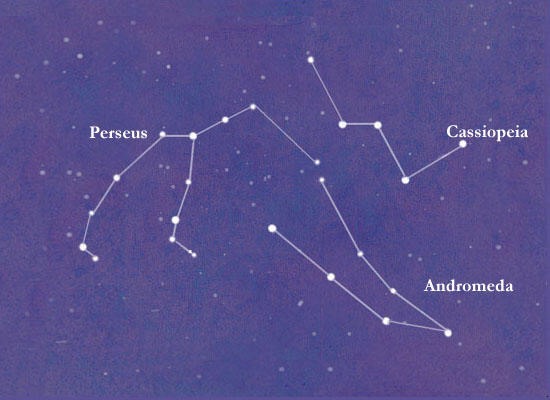 Now, some of you may remember the totally awesome film "Clash of the titans" made in 1981, which had the amazing stop graphic monsters which I readily admit look poor by today's standards, but back in the day were totally scary and I still love them to this day. Well this film covered the story of these three. For those that only vaguely remember, are too young or just didn't really pay attention the story goes…

Cassiopeia was married to King Cepheus and they ruled the North African kingdom of Aethiopia. Andromeda was their daughter. Cassiopeia was very vain and boastful, and made the claim that her and her daughter were more beautiful than the Nereids. The Nereids were the daughters of Nereus and were known to be utterly stunning, they would often be seen accompanying Poseidon. This claim angered Poseidon, and he sent a sea creature named Cetus to lay waste to the coast line and kingdom of the conceited queen.

Cepheus was desperate to stop the attacks of the monster so consulted the oracle of Apollo, who advised that no respite would be found unless he offered Andromeda up as a sacrifice to Cetus.

Cepheus was obviously devastated by this news, but with the safety of his kingdom at the forefront of his mind he took the decision to offer Andromeda up to save his people.

Andromeda was stripped bare, as you can see in the painting by Doré above, and chained to a rock on the shore line.

As Cetus approached, it just so happened that Perseus was passing by (convenient). He was returning from slaying the gorgan Medusa, and noticed the damsel in distress. Perseus had previously been showed with gifts from the gods as he was the son of Zeus and had been through a fairly traumatic up bring (which maybe I'll get around to writing about one day). So he was armed with the helm of Hades, which allowed invisibility, the sandals of Hermes and a few other handy trinkets.

Perseus used the helm to sneak up on the monster and initially tried to kill it with his sword, but was unsuccessful, then remembering he was holding the head of Medusa pulled it out from the bag and turned Cetus to stone.

As Perseus unchained Andromeda he fell deeply in love with her and requested her hand in marriage as a reward for saving Cepheus' daughter and the kingdom.

Each of these characters were immortalised in the stars. Cassiopeia notably placed upside down as a penance for her vanity, set to spend eternity in a compromised position.

Where as Andromeda, particularly, is by far more interesting, as nestled between the other three is the Andromeda galaxy:-

The sky is a truly beautiful place and if you have a planetarium in your locality, go and discover the truly amazing things that lurk up there many which you can see with a keen naked eye, if you're lucky maybe they will retell the tales that gave the stars their names and you can see how our ancestors gave us the myths that we know now.