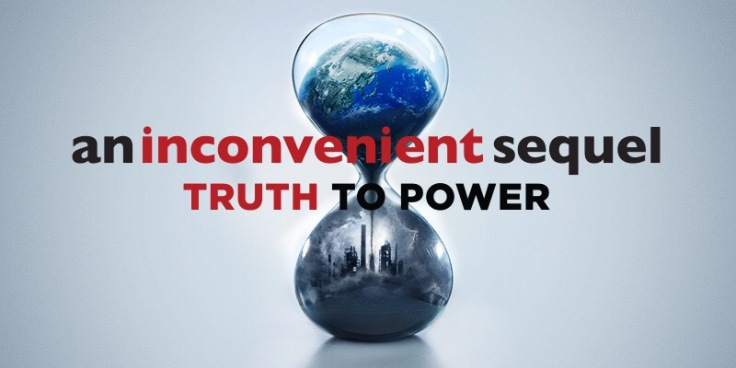 Hopefully we are all aware that we need to look after our planet…it's our home, our life source and our legacy. Al Gore has done great work in bringing climate change to the forefront of people's minds. Investing his time and energy in working towards changing the opinions of world leaders and influential people in moving their mindsets to sustainable solar and wind power.

This film was set to be the pat on the back for all this hard work, and it does achieve that, it details how the Paris agreement was a triumph in the face of adversity, how people moved hell and high water to achieve a sustainable loan for India to build solar energy farms. The training that has happened to bring the knowledge of the effects of natural occurrences on modern life. It's all very noble and justifiable…but this did feel like Al Gore trying to show his own personal trials and tribulations in the journey he has tried to take.

Now I know that he is a politician and while what he is doing is beneficial, the film needs to be taken with a pinch of salt as it feels like the direction was revised after the decision taken by Trump to pull out of the Paris agreement on the 1st June this year.

This film is not out in the U.K. Until the 18th August, but tonight was a preview with a live Q & A session with Al Gore prior to the film being shown. This was aired in 340 cinemas across the U.K. And I thought this would be an interesting follow up to the prior oscar winning "An inconvenient truth", while I liked the passion that Al Gore spoke with during this session and his knowledge on the area he was talking on, personally I think for U.K. Audiences we don't need to be bombarded with the same message relentlessly for an hour and forty minutes. Personally I understand from the first statement that if we don't change to a viable and sustainable source of energy…fossil fuels will inevitably run out. I understand that the increased water temperatures will make ice melt, and create different types of storms. I do also understand that weather happens in cycles and a lot of what we are seeing now has come from things gone by.

Now this post is not my soap box for how or what I think has caused us to get to the position that we are in with the energy "crisis" nor am I open to spark a debate on Trump as honestly I don't have the energy for politics in general so even thinking about this area tires me.

I do also have a minor bug bear in something that was said at the start of the Q & A…it was highlighted how the film had a female producer and director…to which my reaction was…so what… I do believe we are now living in 2017 and that it is not shocking for a women to be in any element of any industry, so why did this need to be highlighted? I'm not sure if this was to give mini high five for allowing a women to work on an influential film, but I found this comment a complete turn off.

Anyway, if you have an interest in climate change and what is being done around the world to try and combat it, or if you are an avid follower of Al Gore, this is probably the docufilm for you.

If you think you are already clued up in this area and don't feel you need to be told over and over gain how solar panels and wind can bring us an energy source founded from nature maybe go and see something more fun.