If you have read any of my blogs you'll know when I was a kid I desperately wanted to be either a mermaid or a unicorn (I was a fantastical kid). Not the chinsy mermaids and unicorns which now fill the high street, but the dark and enigmatic creatures that were untameable and held wondrous secrets.

Ferri presents the very essence of the mermaid/siren in this this wonderful painting, the birth of a siren.

Using the more classical version of the mythical creature, we see the full form of her feminine wiles, as her tail appears from thigh downwards, more eel like than fish. Her stunning beauty serene in her slumber. Unbelievable that she would lure sailors to their death in the rocks of shallow waters.

I love how the light in this picture comes from the left hand side of the picture, enlivening her human body, and highlighting the attraction which any man who crosses her path would see and then the tail, plain and dull in comparison is dimly lit, hiding her darker intent.

There are many, many stories about mermaids in all cultures….way too many for me to go through in this little blog, but I am sure you can all recall a few stories. Some depict mermaids as benevolent creatures who help ship wrecked sailors, falling in love with them. Others talk of mermaids being the cause of storms and floods, as well as calling sailors to their deaths and dragging them under the waves.

There is some basis in Greek mythology although it's tenuous as sirens in the Greek watch were half women half bird, but again they would lure sailors to their deaths with their beautiful voices in to the rocky shallow waters.

Stories of mermaids would have spread from sailors, this is how this creature penetrates so many cultures. Tales of women who swim in the sea would have carried forward, the stories becoming more fantastical which each sailor who supposedly saw one.

In reality it is suspected that what the sailors were probably seeing was the peaceful herbivore Sirenia (Part of the genus of dugong…or manatees). 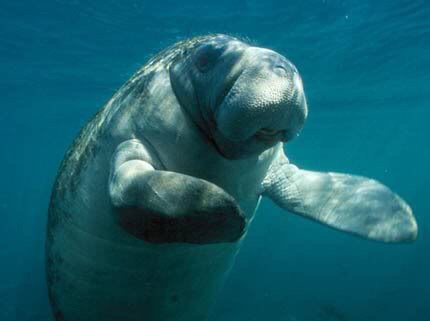 Now…it's tough to see what sailors would have seen when you see the picture of a Sirenia, but they would have been hocked up on rum and at sea for months with no women around, so we will have to forgive them for dreaming that this was a beautiful women.

Regardless of what sailors saw, the stories that have come about due to the illusions, have brought much joy and speculation to myths and folklore.