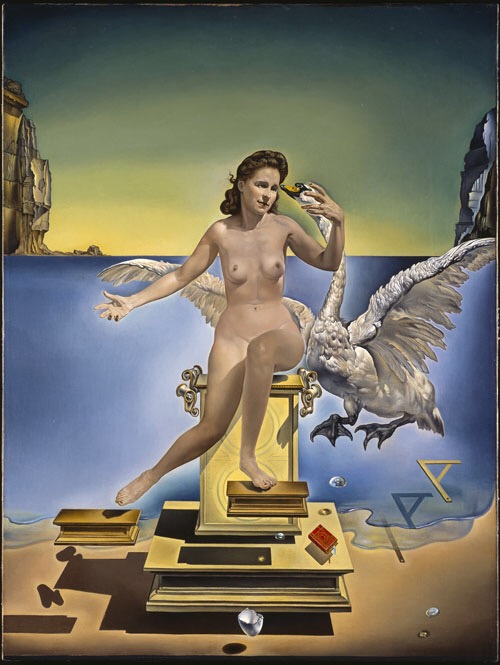 Zeus…he was a bit of a boy wasn’t he? When he wasn’t ruling the rest of the gods, or bringing the thunder, he was off seducing women in animal form. When I say seducing…I’m not convinced they had a lot of choice in the matter. In fairness to Zeus, he probably had a few psychological issues, considering his father Cronus wanted to eat him as soon as he was born, in fear that he would one day be overthrown by Zeus.

Dali, in true Dali style presents the myth in a scientific and ridged mathematical frame work. This follows the “Devine proportion”, which if you’re not sure what I’m rambling about is basically a mathematical equation which forms the golden ratio, meaning if the ratio is the same as the ratio of their sum to the larger of the two quantities this is the golden ratio (If you are truly interested in this equation, as I’m aware this might be a bit OTT in a post about a women with a swan, you can find details on it here). So for those of you that thought that Dali was just a bit “out there” he used mathematical equations in a lot of his work as he believed that true art had to be based on composition and calculation.

Before I get in to the myth of Leda and Zeus, I do think it’s important to know some things about this painting. Dali took his work in a new direction after the atomic bomb was dropped in Hiroshima, as such in this painting there is a mysterious sense of levitation, very much how atomic particles don’t physically touch. Each object in this painting has been carefully placed in the work to be motionless in space. Leda looks as though she is reaching for the swans head but never actually touches it.

Dali himself explained the picture as:-

There are two more things I want to discuss before I get in to the mythy bit. Dali idolised his wife Gala, this was so evident throughout their whole relationship and in his art work, often using Gala as the main focal point of his works. Dali says on this work and Gala:-

“I started to paint Leda Atómica which exalts Gala, the metaphysical goddess and succeeded to create the ‘suspended space'”.

His admiration and inspiration oozes.

Dali’s Catholicism made it very easy for another interpretation of this painting, away from the myth of Leda and towards being a depiction of the annunciation. The swan possibly being the depiction of God, whispering the future in to the ear of Mary. Gala, as Mary looks the swan in the eye, accepting of her destiny, understanding what is about to happen. The conception of Jesus was achieved by the breathe of the Holy Ghost entering the virgin Mary’s ear, so it is very easy to see the link, if you’re that way inclined.

As promised, here comes the myth of Leda and the swan.

Leda was an Aeolian princess. Zeus had admired her for some time. On her wedding day, Zeus transformed himself into a beautiful swan. The swan fell in to Leda’s arms for protection from an eagle which was apparently pursuing it.

The day drew on and Leda and her new husband, Tyndareus, retired to consummate their vows. As Leda lay with her husband, dozing in the rosy afterglow, the swan forced itself upon Leda, creating a double consummation.

From this double consummation, Leda laid two eggs, from which hatched two sets of twins. From the first Helen (As in THE Helen of Troy) and Clytemnestra, and from the second Castor and Pollux. These children, through that crazy wedding night, were all half immortal.

As Greek myths go this one is fairly short and sweet, but I can’t understand why Tyndareus just let the swan go at it with his wife, and why no one panicked when Leda laid a couple of eggs. Regardless, I think that Dali’s painting it’s an interesting take on this succinct myth.

The juxtaposition of the scientific, the religion, the myth and the emotion of this painting astounds me.