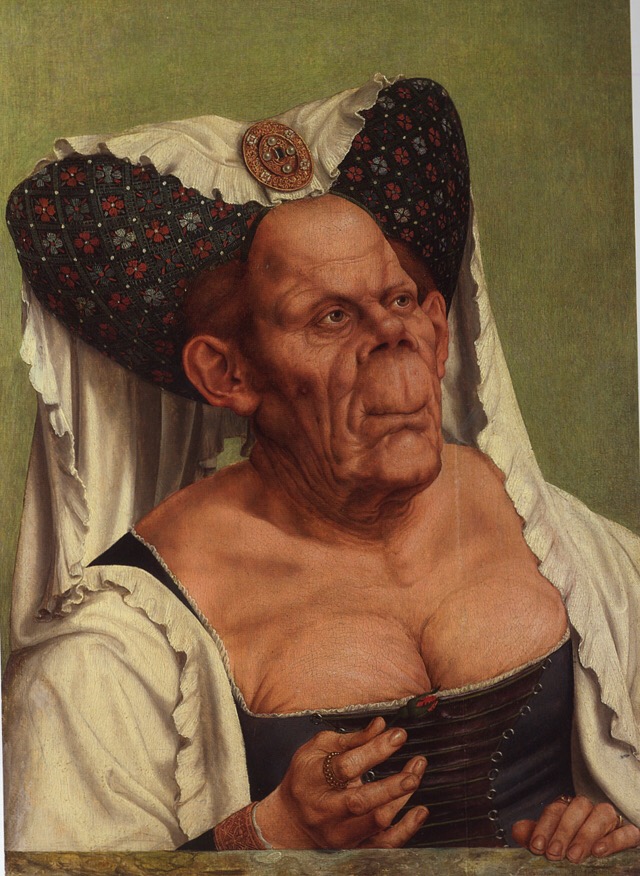 I know what you’re thinking, why are you posting this seemingly grotesque old women. She looks a bit like Jack Whitehall’s dad in drag. Well I guess this is the picture that introduced me to my appreciation of art. Massys meticulous painting of this less than blessed woman, is so lovingly produced that the viewer can see that there is something underlying.

For a long time this picture was shrouded in mystery. Why would an artist choose to paint such a subject, who was she and who drew her first…Massys or Da Vinci…

Painted around 1513, the women is shown wearing out of fashion finery. The horned headdress depicting an aristocratic background, heavily embroidered, her corset well made, pushing her aged breasts up, showing the loose and withering skin. In the woman’s hand a small red rose bud, the symbol of seeking engagement. It’s thought that the bud was used rather than a flower in blossom to show that it is unlikely that she will ever find a suitor.

Particular attention has been paid to the hands and face. Her knuckles are enlarged which in turn disfigure the fingers of the hand holding the bud. Her face elongated, large ears and forehead. Her shoulders are also seemingly enlarged, losing the shapeliness of her collar bone and neck. Back in the 1500’s I’m sure they would have just considered her unfortunate, but recent research denotes that the women in the painting was almost positively suffering from a rare form of Paget’s disease.

Paget’s disease, disrupts the normal cycle of bone renewal, this causes then bones to become weakened and possibly deformed. It usually affects people in later years and is particularly rare in people under the age of 50. The most commonly affected area is pelvis and spine, but skull can be affected. There are minimal side effects pain wise, usually shooting pains or dull throbbing. This means that there is a potential that this would could have been beautiful before the onset of this disease, her upper jaw bone elongated, pushing her nose up and distorting her mouth.

It has been debated that the woman is Margaret Maultasch, Duchess of Tyrol and Princess of Carinthia. Legend was not particularly kind to the duchess, with a reputation of being ruthless and powerful, she was also documented as being the ugliest women in history. She was known for expelling her impotent husband and remarrying Louis V from Bavaria prior to a divorce from the first husband. This scandal spread across Europe and earned her the abhorrent reputation. It is thought that the painting is actually an old women from a travelling band who earned money from her disfigurement, the painting created as a satirisation of the reputation, despite it being painted 150 years after the death of the duchess.

It was heavily debated who created this portrait first…Massys or Da Vinci. Sketches from Da Vinci were found of the same women:-

Which lead to long debates as to whether Massys took the sketch and then created the full art work or if Da Vinci was inspired by Massys and replicated. As it transpires Massys completed the original, as dating of the two pieces have since revealed. It is also known that Massys and Da Vinci were friends and traded sketches and studies.

So how did this picture kick start my art appreciation? As a child I remember viewing this picture and remarking to my grandmother how ugly the women was. This evoked a brief lecture on how beautify is only skin deep, and the artist has portrayed the women in her best light, bringing forward her softer side. My grandmother didn’t know the history to the painting but her interpretation was that the women had an inner charm. This lead to me looking at things in a different light. Not to just see what was in front of me, but really look at the paintings, or anything else for that matter.

This painting can be seen in the National gallery in London, and is Massys most famous work. What do you think of the ugly duchess? Why not let me know in the comments.