Next door to the Kunsthall, is a smaller building which looks a little like a school. It has paper cut outs of bones in the widow, and from the road side, could easily be mistake for a child play centre. I only knew it wasn’t, because I had read that there was a small natural history museum packed with goodies before I went to Rotterdam. I very nearly didn’t go, as write ups had said that it only took an hour to go around, and while the reviews sounded good, they did not give the museum it’s due at all.

It’s fairly cheap to get in to, €7 or if you by a welcome to Rotterdam travel card (which I did….can’t tell you how worth it this is…three days travel on the metro, trains, trams and buses for €20, plus a discount booklet) you get in for half price.

You’re met with a stuffed orangutang in a class case. I’m not for killing animals in vain in any way, but a lot of this exhibition is taxidermy from a bygone era, and I do love a bit of taxidermy, especially if it is poorly done or the facial expressions are wrong, and wow this museum is full of this. I also love skulls and things in formaldehyde, I find it so fascinating. So if you’re like me, this really is the place for you to go.

In the main hall downstairs, there is a central display of a stuffed bear, polar bear, tiger, wolf, seal, wallaby and I am very sure I have missed something but you can imagine the setting. 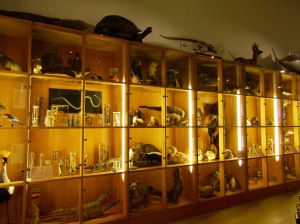 I’m mesmerised by the sea creatures in jars and the bugs pinned to boards, I have always wanted a framed bug or an octopus in formaldehyde… 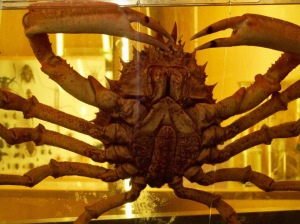 To the left of the main room, is a smaller room with changing lights. Here there are studies on animal horns and skulls. A lot is written in Dutch, so very hard for me with my very poor Dutch language skills to understand, but I can truly appreciate how these studies have lead us to the understanding of the world we live in today. 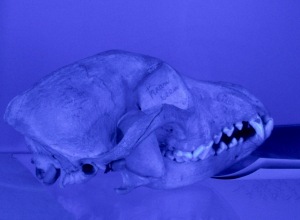 It was fairly difficult to take photos within this room due to the changing light patterns, but I am really pleased with how this canine skull came out.

Back in to the main room, and more cases filled with butterflies, bugs and shells, each so beautiful and intriguing. It’s so easy to forget the wonders of nature, when I’m sat at my desk wondering if a piece of software will fail today, I encourage everyone to get out and do something to see something unusual this weekend, even if you just look up and see birds migrating, or an interesting cloud formation. Look at it and appreciate the world around you.

Ok spiritual nature appreciate over, back to the museum.

As promised, some of the museum taxidermy is hilarious, and in particular I love this guy. He has my photo smile. All teeth and wide eyes. 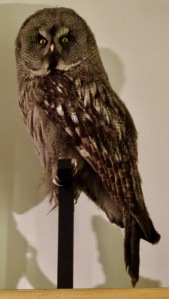 Moving on through the museum, there is an odd display in what modern life is doing to our wildlife, the central point of this being a swan nesting in a pile of rubbish. It’s striking and affective in its message.

The second floor of the museum is decimated to fossils, and oddly made up creature. There is a display of fossils and bones which have been found across Europe. The display is well laid out and interesting, although they do forget to put the English translation to some of the items, so this is not the place to go and learn, you probably needs a good base knowledge before going to this museum if you don’t speak Dutch.

The most striking thing for me of the bones section, was the reconstructed skull of a Leviathan, the predecessor of the modern sperm whale. This is huge, and intimidating. It’s around 3 metres long and the teeth are approx 40 centimetres long with a diameter of 12 centimetres. The original skull was found in Peru by members of the Rotterdam natural history museum along with some other in 2008, the find was published in 2010 as a new species of sperm whale being uncovered. The original skull is still displayed in Lima, but 2 reconstructions have been made to display in Rotterdam and one as a preservation.

The final section of the museum is dedicated to made up creatures and a fantastic art display, but hold fire for the description of that for another post.