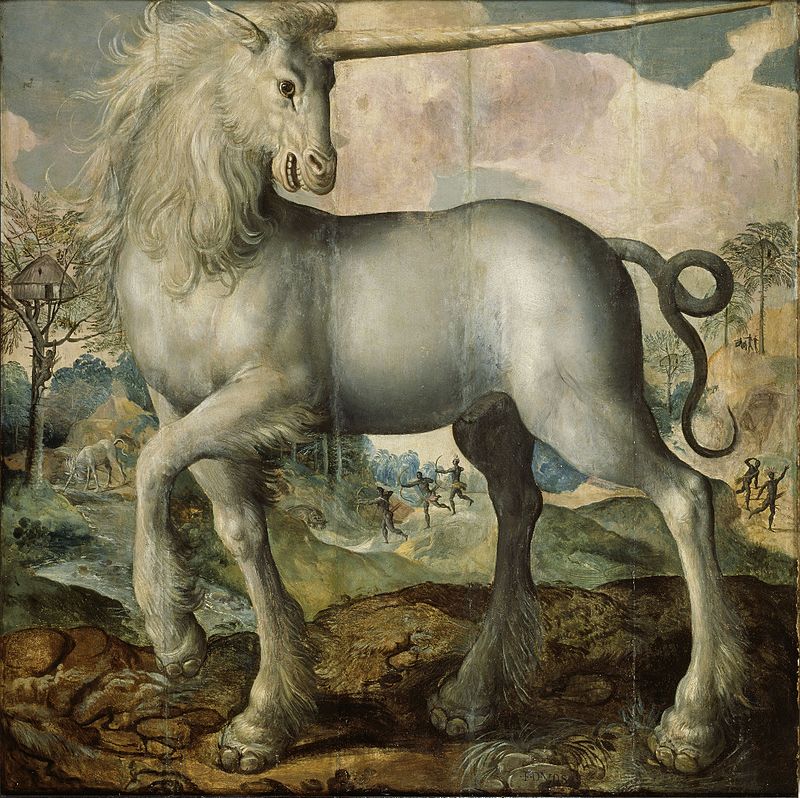 Unicorns seem all the rage these days, with sparkly horns and cutesy looks, and this is fine, but it has lost the true beauty and story behind this temperamental and enigmatic myth.  Personally I prefer the difficult nature of the myth to the little ray of sunshine that they are shown as now, but as most of my friends and colleagues know I am a big fan of the unicorn, so I end up with little gifts of unicorn pens with multicoloured horns and (although I must say to my delight as I am really a big kid at heart and I have a name which is never printed on anything, and I am a tupperware fan) a lunch box with a unicorn and my name emblazoned across the lid.

Maerten De Vos captures the true essence of the unicorn in this stunning painting.  The flemish artist produced this at some point in his life which was between 1532 and 1603, although the picture remains undated (or as far as my research went I couldn’t find a specific date).

De Vos was mainly known for his religious and historical art works, which I guess the unicorn could fall under both these categories as it is both in Greek natural history and the creature is described in the bible.

De Vos found his feet with art after a trip to Italy which served as a right of passage for him, and he stayed in Italy for eight years.  His work shows the palette and style of the Venetian’s, so we can see that this trip heavily influenced his style and technique.

In 1560 Flanders went through Beeldenstorm, this was an iconoclastic fury which saw many forms of church decorations and fittings destroyed.  Most of the historical and religious paintings at the time had been created by Frans Floris saw many of his art works destroyed and this slipped him into a cycle of depression and he all but stopped painting.  While this is sad for poor old Floris, this opened the doors to newer artists – De Vos being one of them.  As a result of this, De Vos was commissioned to decorate  the Palatine chapel of William, Duke of Brunswick-Lüneburg.  This steadily grew his reputation and in 1572 he was appointed dean of the Antwerp guild.

We can in no way say that De Vos was an innovative painter – he borrows styles all over the place, but he was an accomplished artist who produced beautiful paintings.  Who says that you have to be innovative to be recognised for a skill?  De Vos was however an inventor and created designs which were easily replicated on a printing press for easy distribution.  These included images of the seven deadly sins, and and the martyrs of the old testament.

So, now that you know about the artist, how about I talk a little bit more about the Unicorn.  This creature has gone through the ages and while the look may be described a little differently from era to era, the premise is the same.  A white horse (or goat) like creature with cloven hooves, bearded and a single horn protruding from its forehead.  Its temperament is described as wild, haughty and unpredictable.  Unicorns we said to only be able to be captured by a purest of heart virgin, and then the wild beast would be so enchanted by her that it would lay by her side.  This was most famously depicted in seven tapestries called “The hunt of the unicorn” created in the 1500’s.   Unicorns were said to be able to clean poisoned water and they could cure the sick with their magical powers.  Narwhal horns were often sold as unicorn horns during the 1500’s to make potions and tinctures.

The Greeks were convinced in the reality of the unicorn, with accounts of them written about in a book called “On India” written by Ctesias, and the description matches that which we see in De Vos’s painting.

Through the ages this creature has held such intrigue for people and we can still see it holding iconic value in today’s society in the UK’s coat of arms, the Unicorn representing Scotland, as it was said that a Scot would rather die protecting their country that give up, echoing the unicorns temperament and haughty nature.  It should be noted that in the coat of arms that the unicorn is collared and chained, indicating the taming of the beast but later renditions show the chains broken, so tamed, but free.  I could ramble on about this for hours, but I don’t wish to bore you all on heraldry.

De Vos captures all of these ideals of the unicorn in this painting, the look of a creature that is not all sweetness and light, but rather a wild beast with a killer attitude.  The hooves are not dainty and beautiful but heavy and powerful.  It has a wild look in its eyes and a defiant stance.

In the background we can see a hunt going on, and a unicorn drinking from a lake, unswayed by what is going on around it.

Whether you prefer the chintzy unicorns which adorn our shops now, or like me prefer the raw nature of the myth, there is no denying that this creature holds a dear place for many.  How do you feel about it?  Maybe let me know in the comments below.