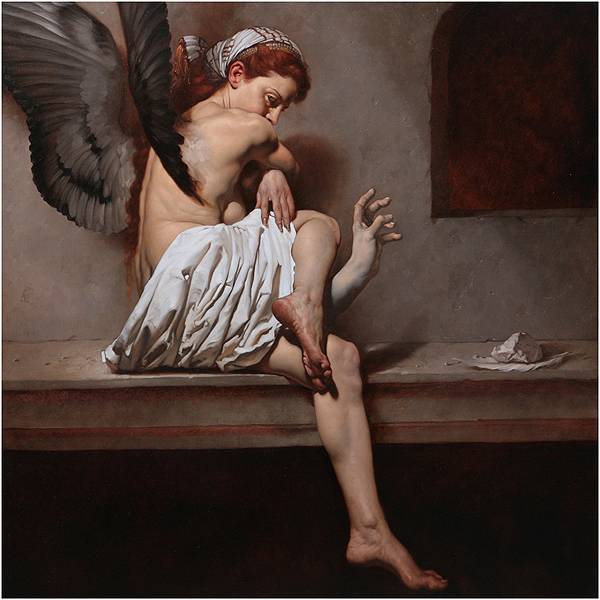 Despite not being a believer in any God, religion is quite honestly one of my favourite subjects.  I find it absolutely fascinating how there are so many different factions and divisions of faith, yet they all lead to the same underlying message.  I don’t say this light heartedly either, I spent a lot of time searching for some form of faith before I gave up as I decided that there was too much hierocracy between faiths.  I don’t say this to offend anyone either, but really it all boils down to a few basic things, so I think I could say I am non religious who has some belief in the base concept of basic humanity and kindness.

I think what fascinates me most is the darker side of religions and myths, the demons and creatures – I hear you screaming at me “Yes, Widowcrankster!! We have picked this up from your posts”, but I find it so intriguing and these stories form the bases of our common culture now.

So, today I thought I would write about a demon/fallen angel called Naamah.  While the art work above is not specifically associated with this particular demon, we can honestly say that female legions of the devil are succubae and  I think that this is a beautiful interpretation created by Roberto Ferri.  His modern take on the renaissance style is fantastically executed.  The picture also fits so well of the stories of Naamah and Lilith.

Naamah, is probably less heard of than Lilith, but is essentially her counterpart.  She appears through Jewish writings and in the bible, and is a collector of souls, with the purpose of taking them to hell.  She is linked with the archangel Samael (the angel of death) and is known as the mother of divination and her children are the plague of mankind.

Cast your mind back to Adam an Eve.  I think we are all pretty familiar with the story of the snake and the apple and their banishment from the garden of Eden, so I won’t go over that.  Skip forward to the time when Cain killed Able.  Adam left Eve for around 130 year, and during this time, Lilith and Naaham are said to have visited Adam and bore his children, these children became the plague of mankind.  Bringing an impurity into the blood line and leaking out the evils of the fallen angels in to the world.

Now, we could take this as a convenient coincidence that so many women had the same name, or we could look at it that Naamah took to seek out men of power an influence to seduce them and keep her own life going.

Naamah is notorious with the seduction of men, epilepsy in children and was said to strangle children in their sleep (associated with cot death or sudden death syndrome in children).

Naamah’s temperament was supposedly easy going, and she was said to be quite pleasant on the eye, which would be why it was so easy for her to seduce men.  This act can be seen in a number of ways – either that of bringing men down or that the act of sex was part of her worship and has links to being a goddess of sexuality and fertility…shame she liked to strangle children… but every coin has two sides.

For anyone who has recently watched “American Gods” (which if you haven’t I highly recommend – or at least read the book), Naamah is probably the most likened to Bilquis, the Goddess who takes worship through sexual pleasure, also likened to the Queen of Sheba, who coincidentally (or is it), was one of the wives of King Solomon.

With so much intrinsically linked to this one entity, it does appear that she transcends time and age to achieve the worship that she required.

No matter what you believe, these stories are incredibly interesting considering there are many references to seemingly the same entity requiring the same form of worship.

If you look back at Ferri’s painting now, you can hopefully see why I chose this particular picture, with the mans hand trying to escape from the female entity as he meets his doom to feed her lust.