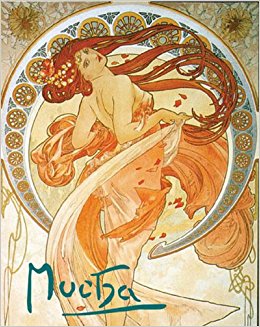 I don’t usually just write about an artist and not pick a particular picture to go with it, but on this occasion I am giving a bash at just speaking about the life and rise of Alphonse Mucha.

There is something decadently elegant about the Art Nouveau movement. Removed from the academic and classical styles which were so readily seen at the turn of the century, this style had a freedom and flow which had an underlying statement of love and beauty. The curvaceous forms and looping lines of the style accentuate the pieces and lent itself to not just retinal art work, but home design and architectural displays.

Alphonse Mucha, was the father of this movement, with the style being called ‘Le Style Mucha’ when it first came in to the public domain, he became famous in this field almost by accident. Mucha hated the term ‘Art Nouveau’ as he felt that art was eternal and never just ‘nouveau’ and he spent most of his career trying to disassociate himself with the term, but was completely unsuccessful.

Mucha was born in the Czech Republic in 1860, and was deeply religious from an early age, he became a chorister at the Cathedral of St. Peter and Paul where he received a secondary school education.   While Mucha’s singing abilities afforded him his education, his main hobby was drawing, and he was inspired by the Baroque art which surrounded him.  This hobby led him to work as a decorative painter. In 1879, he moved to Vienna to work for a theatrical design company, which gave informal training to his artistic style.  In 1871 his employers business was destroyed by a fire, and Mucha moved back to his home town, undertaking work as a freelance decorative and portrait painter.  Count Karl Khuen of Mikulov hired Mucha to decorate Hrušovany Emmahof Castle with murals and was impressed enough that he agreed to sponsor Mucha’s formal training at the Munich Academy of Fine Arts. In 1887 Mucha moved to Paris and continued his studies, and in addition took on design work for magazines and advertisements which are a large part of what people remember Mucha for today.

About Christmas 1894, Mucha wandered into a print shop where there was a sudden and unexpected need for a new advertising poster for a play featuring Sarah Bernhardt, the most famous actress in Paris.  Mucha volunteered to produce a lithographed poster within two weeks, and on 1 January 1895, the advertisement for the play Gismonda by Victorien Sardou was posted in the city, where it attracted much attention.

Bernhardt was so happy with Mucha’s work that she signed him up with a six year contract.

In 1900 Mucha was given international exposure in the Universal Exhibition in Paris. It is here that Mucha felt that he had made some contribution toward bringing aesthetic values into arts and crafts.

In 1906 Mucha married and the couple spent four years in New York, where his daughter was born. He started work on his nationalistic project as he was determined to show the Czech Republic that he hadn’t sold out.  Mucha was assisted in this project by Charles R. Crane, who used is fortune to assist funding revolutions.  Eventually Mucha and his family returned to his home country and settled in Prague, and when the country gained its independence, Mucha created murals for official offices and buildings of prominence along with designing the new postage stamps and bank notes.

Mucha spent a long time working on what he considered to be his life’s fine art masterpiece, and created a series of 20 pictures which made up The Slav Epic. This depicted the general life and history of the Czech and Slavic people and in 1928 it was bestowed to the City of Prague.

This work edged away from Mucha’s most well-known style and can still be seen in the Prague National Gallery.

Mucha died in 1939, after being arrested by the Gestapo for his nationalistic beliefs and Jewish route. During integration he contracted pneumonia, and he died of a chest infection shortly after his release.

When Mucha died his art was considered to be outdated, but it has periodically made revivals and many have mimicked his style.

Personally I feel that Mucha’s art brings a mysticism and spirituality to art which was unique and vibrant.

The fluidity in his work accentuating the feminine form and softness which is associated with the underlying tones of his work. His use of women in his work was a direct reaction to the overly-industrialized, impersonal, “masculine” world.

If you are visiting Prague, you can see more of his work in the National Gallery, which you can get more information about here

No matter how you feel about Mucha’s work, it is impossible to deny that it feels luxurious and stylistic. His passion for art shining through his technique leaving a legacy which will penetrate the art work eternally. 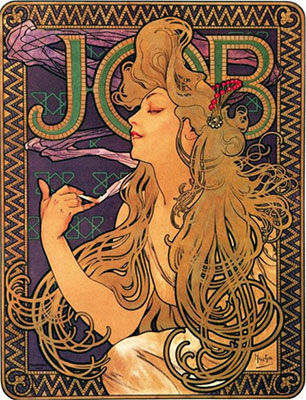