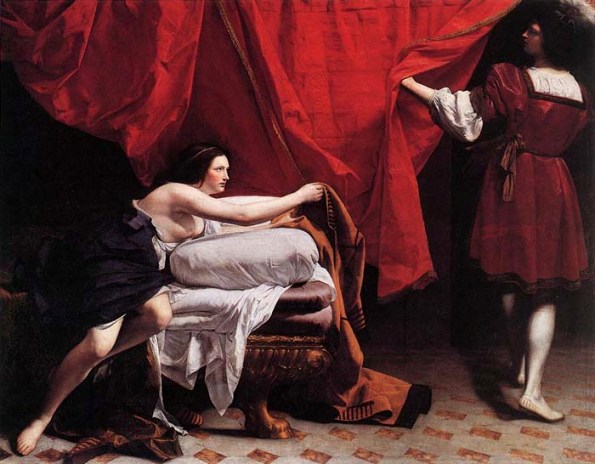 Bored housewife seeks slave to cater to her every whim… Well that is what Potiphar’s wife should have been advertising for, since this was in the time before tinder and meeting someone meant actually having to be in the same place at the same time.  I am pretty sure that the woman in this painting would go down a storm as she doesn’t appear to be shy with her “assets”, although cross her and she will make sure to make your life a living hell.

I am sure most of you have heard the story of Joseph and his Technicolor dream coat, but just in case you weren’t a huge fan of Jason Donovan, or the bible, let me explain what is going on in this piece.

Joseph had 10 brothers, well half brothers, along with another brother and a couple of sisters. The half brothers did not like him very much as Joseph was their father’s favourite.  The favouritism was shown by a gift that their father gave Joseph of a fine coat of many colours.  Joseph had a couple of dreams which depicted that his brothers and family would bow to him.  This didn’t sit particularly well with the brothers, and they formed a plot to get rid of Joseph.

The plan had been to kill Joseph, but Ruben (one of the brothers) talked the others into throwing him in to a cistern as he had the intension of saving him later.  As the plot unfolded and Joseph was imprisoned in the cistern, a chance caravan of merchants came by taking spices and perfumes to Egypt.  The brothers took the opportunity and sold Joseph to the merchants as a slave.  They then painted his coat with blood and presented it to their father so that he would believe that Joseph was dead.

Once in Egypt, Joseph was sold to Potiphar.  Joseph very quickly climbed the ranks within the household, soon becoming Potiphar’s personal servant, and went on to become the head of the household help.

Joseph, was young and quite handsome, and the eye of Potiphar’s wife had fallen on him, and she made advances towards him.  Joseph being a loyal servant to Potiphar rejected her, but this didn’t stop her attempts at getting her way with him.  This peaked on a day when Joseph entered her chamber, and she again tries to entice him, but as she grabs his cloak, he drops it, leaving it with her and leaves the room.

At this action, Potiphar’s wife is enraged, and calls out that Joseph has tried to rape her, using the cloak as proof that he had entered her chamber.

This in turn enrages Potiphar and Joseph promptly gets sent to prison.  From here Joseph manages to rise through the ranks of the prison, through interpreting dreams and earning the trust of those around him, he soon becomes the Pharaoh’s cup barer, and eventually  becomes the Vizar of Egypt because he was able to tell the Pharaoh what his dreams meant and predicted the seven years of abundant crops which would then be followed by seven years of failing crops, and advises that Egypt should store grain to see them through the harder times.

Joseph does get reunited with his family through some contrite means, but really that is not integral to this picture.

Gentileschi, in this art work depicts the moment that Joseph leaves his cloak, or in this interpretation, his coat, with Potiphar’s wife.  Gentileschi’s style heavily echoes that of Caravaggio, with only the main attraction being painted, with little to distract from the scene that is unfolding in front of the audience.  There is no background to distract from the scene, and only swathes of material to dress the set and give the feel of a luxurious house hold.

The shoes beneath the bed, give away the status of the women, they appear to have been kicked off in a frenzy, but this interprets the state of her marriage.  From this very simple addition to the painting we can tell that she is in an unhappy marriage and it is her looking for an affair.  Her one bare leg on the floor, adding weight to this story.  The bed itself is also in disarray, as if she has rushed to get herself in a position of seduction, or that there has been some form of tussle.

I actually saw this painting in all its glory on Saturday, while visiting the Queen’s house in Greenwich, and it is very easy to see what is going on in the painting before you even get to the plaque to tell you what it is all about through the use of the simple yet effective symbolism.

Taking a not so closer look at the woman in the painting, you can see that she is in no distress, with her breasts on show, and her arm outstretched with the coat, her face is that of unimpressed rejection.  A small flush across her checks, of maybe embarrassment of being rejected.

Joseph on the other hand, as he leaves the room, looks over his shoulder at her, almost to check what he has left behind, little does he know the trouble leaving that coat behind will cause…but you know what they say about a woman scorned.

Being a fan of Caravaggio, Gentileschi’s picture really appeals to me.  When he had started painting he was very much using the mannerist style, but as he refined his style, took more to the naturalist school of thought which Caravaggio did so well.   This painting suggests a battle of wills and emotions, not an unsophisticated grab at sexual gratification. It is interesting to speculate how much this sympathetic image of the Wife was shaped by the rape of Gentileschi’s own daughter, Artemisia.

It’s an age old story of where a woman doesn’t get her way, which we see in so many of the Greek and Roman myths that it is hardly surprising that it has turned up in the Christian faith, but I particularly like this painting for its more sophisticated interpretation of the event.