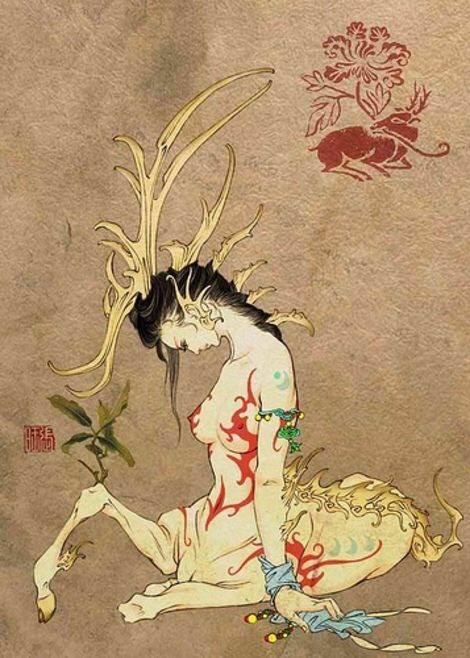 Occasionally I will come across something that completely baffles me. It’s not often as I really like to profess my utter geekdom in all things mythical, but this one has me stumped. I’ve done a fair bit of research, but Chinese myth is fraught with overlapping images and/or lots of things which can all be the same thing. None the less, I think that this is a beautiful picture, and I have piece together a few theories on what this could be, although, as ever, there are many versions of folklore so I’ve taken the versions which suit me.

This picture has been listed as numerous creatures, ranging from the Chinese unicorn or Qilin, which is what I have marked it as in the title to a silk worm girl and if we bring it in to the western culture we could say that it is a form of centaur and even at a stretch we could push to say it’s a depiction of a wendigo, but nothing is wholly conclusive.

The Qilin/unicorn is a chimerical creature (chimera being a combination of animals, most commonly a lions head, goats body and tail of a serpent if we look at Greek mythology), it is simply described as a hoover creature, which the above is, with its slender legs and delicate hooves, almost deer like in its appearance. Horned, which she is, with antlers which sprout from her head and all down her back (although I do protest that unicorn does mean only one horn), and is often shown with fire all over its body, which again, the creature in the picture does seem to have some flaming emblems across her body. These creatures were said to be seen with the arrival or passing of a sage or illustrious leader, being a symbol of good luck or serenity and were thought to be a good omen. Qilins have also been represented as a giraffe, with scales, and this image dates back to the Ming dynasty after trips to Africa, and giraffes were brought back to China as gifts. The link between the mythical creature and the giraffe was not such a fat stretch of the imagination as both were vegetarians and supposedly quiet in nature (but I have seen documentaries on giraffes and they aren’t all sweetness and light, they can pack a good blow with their necks), also the giraffe does have a form of horns on its head, and their tessellating coat could be seen as scales or flames.

If I go with this being a Qilin, the antlers come from the representation of Chinese dragons, rather than the traditional western unicorn as the dragons have antlers, also dragons are commonly depicted as golden, so the yellow hue of this creature links it to the mythical status of the dragon. As I said earlier, a lot of the creatures within Chinese mythology seem to link and overlap quite dramatically, each having attributes which is shares with others.

Moving on to the theory of the silkworm girl. A girl lived with her father who was a merchant. He needed to go to Shanghai to trade goods, so left his daughter at home as he made his trip. The girl has a horse who she loved dearly. Without her father at home, the girl grew lonely and confided in the horse, saying if you brought my father back to me, I would marry you. With this the horse bolted from the stable, galloping to Shanghai. On finding the girls father, the horse approached him, thinking the only reason that the horse was there was that his daughter was in trouble, he returned with the horse back home. As he dismounted the horse, and asked his daughter what was wrong the horse began to scream and kick, the father confused asks his daughter again what is going on. She explains bashful.y that she had said to the horse that she would marry it if it brought him home. The father is outraged and ashamed by this, but the horse doesn’t stop its noise. The father, deciding that he can not let this happen, kills the horse, and strings it’s hide up in a barn to dry. He then returns to Shanghai to complete his business.

The next day the girl enters the barn with her friend. On seeing the horse hide hanging the girls friend asks her about it, and she responds that the horse wanted to marry her. With this the hide starts to move and envelopes the girl. The friend, scared runs to get her own father, but when they return, there is no hide, no girl and no sign of struggle. The father however believes what his own daughter has told him and they start searching for the missing girl.

After a few days there is still no sign of her, and the whole village is now searching. Returning from Shanghai, the girls father is told of what has happened and the search continues. After a few more days, a boy finds a strange cocoon hanging over a mulberry bush, to which he goes to fetch the father. As they pull the cocoon apart they find the girl, merged with the horse inside. She is now destined to look after the silkworms, only able to become human at night.

What leads me to think that this picture could be related to this story, is firstly that the girl and the horse merged, giving the centaur like quality to the girl. The next is that she is holding a piece of blue silk in her hand. Could this be the clue to link the picture with this story?

Maybe you know so,etching I don’t about this intriguing picture. If you do I would love to hear from you in the comments.