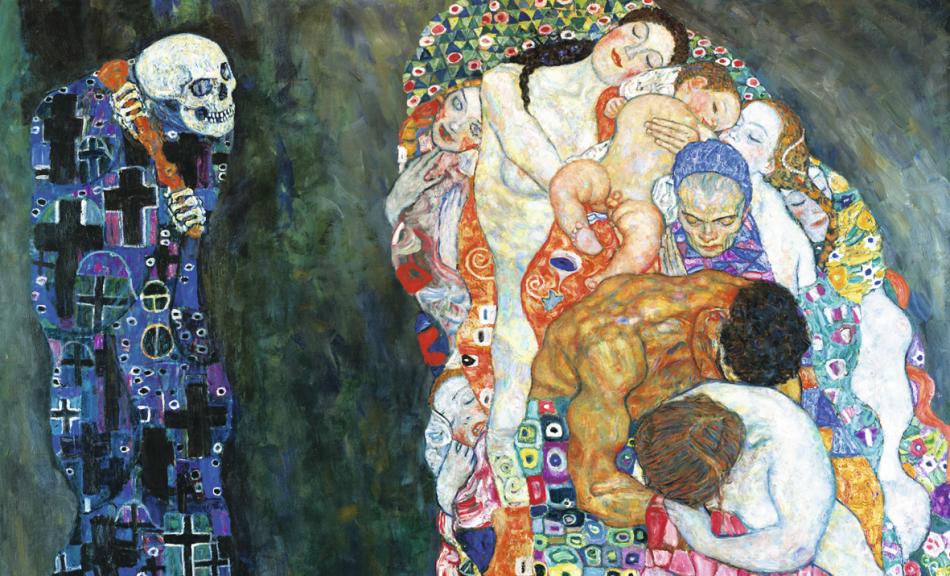 Life is a funny old game isn’t it.  On the very base of it we are here to procreate, but we as a species have a consciousness about our own existence, we have developed all the good and bad parts of life as we know it.  The rituals and routines, the science, the understanding of how nature works and the impacts of our own existence on the world which we live.  We have created deep and far reaching theories on the reasons for our own mortality, which we have written reams of books on, and argued over since the dawn of time, constantly striving to reach the ultimate understanding of why we are here and have this amazing consciousness.

Klimt, has created this extraordinary work, which seems to encompass the base of our existence, along with our own personification of death.

Klimt is known for his symbolic paintings, and was the first president of the Vienna Secession. Unlike other art movements, this Union was more interesting in exploring art outside of the realms of academic tradition, and didn’t limit the artists to a certain style or regime.

Klimt started his artist career as a conventional and successful architectural decorator. It was only in his later life that he developed his style and honed his focus on the female form. In 1900 he accepted a commission to decorate the great hall of the university of Vienna, but it met criticism when finished and it was deemed pornographic. As a result he took on no other commissioned pieces. While he didn’t paint under commission, he did find a new success from his “Golden phase” paintings, which are probably among best known works.

Egon Schiele was highly influenced by Klimt, but I’ll leave Schiele for another day.

Death and Life was painted between 1908 and 1915, originally thought to have a gold back ground, which was then painted over by Klimt in 1915 as well as additional adornments being added to the pile of people and death, despite the painting being hung for a number of years, as he was never truly happy with the painting. The death of his mother Anna, may have played a part in the change of the painting, in 1915, changing his view on mortality and its role in the cycle of life within his own eyes.

Regardless of Klimt’s feelings on this painting, in 1911 it received first prize in the world exhibitions in Rome.

What we see in this painting, is the personification of death, watching the cycle of life. It’s ultimately not a particularly frightening or threatening figure of death, with its decorated robe and almost quizzical (Well as quizzical as a skull can get) expression.

The cycle of life is represented through echoes of the “All the world’s a stage” speech by Shakespeare, which features in the play “As you like it”. In it it describes the seven ages of man, and while there are eight figures in the right hand side of the painting, it does show the seven stages, from birth right through to old age and inevitably death. The figures are predominantly female, with only two male figures featured, but I believe that this is more the artists preference, although could be seen as a representation of life coming from women and their nurturing instincts shaping the lives of their children as they travel through the cycle.

The figures of life are surrounded by, what I see as, highly decorated quilts, or tapestries, which sits so nicely with the image of being part of life’s rich tapestry.

You can see that the figures on the right, are completely unafraid by the presence of death, as they are so wrapped in their lives, which gives the feeling that they are accepting in their ultimate fate. This could have reflected Klimt’s own feelings on death as this was painted in his later years, seeing as less of an ending and more just part of the cycle of life.

I really appreciate this painting. I think it sums up the allegory of life and death beautifully. While death may swipe individuals from their mortal coil, humanity as a whole still continues to flourish, ever evolving and changing despite the knowledge of their ultimate fate.

Do you see something in this picture that you think I may have missed? Why not tell me in the comments?