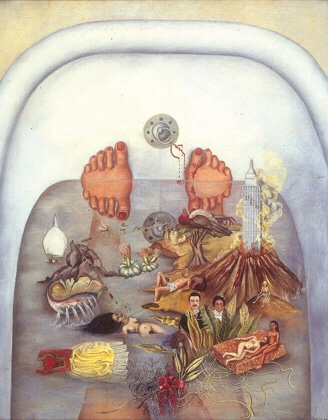 I don’t like feet… well I don’t like other people’s feet. Mine are obviously adorable, but feet generally are not a persons best feature. They are functional, they get you from point A to point B, so why would you want to complete a self portrait of your feet? Personally I wouldn’t, but Kahlo creates a surrealist portrait, with only her toes poking out the water, leading the audience in to a biography of her life.

This painting was completed in 1938, and while Kahlo was not a surrealist artist, as she mostly painted self portraits, this piece opens her life up to her viewers in a juxtaposition of relaxing in a bath and the dramatic and sometimes traumatic images which emerge from the water.

To appreciate this picture, you need to have some background on Kahlo. She had polio as a child coupled with spina bifida, and at the ages of 18 she was seriously injured in a traffic accident. Her pelvis was smashed and a rail piece punctured her abdomen and uterus. This lead to a year recovery, confined to a bed. Prior to the accident, she had been a promising medical student, but her education had to be abandoned in the aftermath of the accident. The story goes that her father had a box of oil paints which she had always admired, so while confined to her bed, she took the opportunity to put them to use. Kahlo was heavily interested in politics and in 1927 joined the Mexican communist party where she met her husband, Diego Rivera, and while they stayed together until Kahlo’s death, the relationship was volatile due to both having affairs, despite this they loved each other, so when they divorced in 1939, they could only stay away from each other for a year, before they remarried.

This painting takes many elements of Kahlo’s life, combining her political and cultural identity along with her pain and loves, each being interconnected, as life is, and how one set back led to another and all of these thoughts present themselves in the water as she sits and soaks the bath.

For me, the first thing that I noticed in this painting is the feet, the right being disfigured and bleeding, a direct representation of her accident and the physical pain that Kahlo is suffering. The next thing I noticed is the volcano with the Empire state building smouldering within it as lava and smoke churns out of the mouth of the active volcano.  This can be linked to several things in Kahlo’s mind.  The physical pain from her right leg (as it is placed directly over the shin), constant surgeries on this leg coupled with gangrene and the forward plan of amputation, but it can also show her dislike for America, as she quite often shared in her political views and writing.    There is so much going on within this volcanic island, that it could be very easy to contribute all the symbolism to just the physical pain felt, the seemingly dead bird on top of the tree, showing a thought of Kahlo being on the hospital trolley after being pierced, the headless body at the foot of the volcano, and the skeleton sat on the mound to the right foreground of the activity, all showing a pain and loss that Kahlo left as her right leg was rendered almost useless.  This however would cut out the cultural and nationalistic entities, such as the desert with the succulent plants with long roots – a regular theme which Kahlo used to determine a longing to go back to pre-Columbian times and get back to her cultural roots.

In the Left foreground we see a Tehuana dress, floating on its own, with a naked and strangled woman not far behind it, showing a vulnerability and perceived decay from being separated from her culture.

In front of the volcanic island, we can see two people amongst the plant life, these are Kahlo’s parents, as seen in portraits that she had previously completed of them, another link to her cultural roots.

The woman floating in the water and the headless man on the island, hold some symbolism to Kahlo and Rivera’s disjointed marriage, a rope around the neck of the women, which anchors a tightrope, the other in end of the rope in the hands of the headless man, creating a diamond.  On the tightrope we can see insects and a woman, indicating the affairs.  Even this has cultural references, the woman separated from her cultural dress as the man on the island which represents America shows Rivera’s reluctance to leave America, and Kahlo’s feelings of being bound, yet unable to move forwards or backwards, the clashing nationalism of each area, causing a further strain on their relationship.  The woman echoes images of Ophelia, which as we know from my earlier post, she was the ultimate in subservient woman, pushed to the edge (Ophelia).

In front of the portraits of her parents, we can see a lesbian couple, floating on a mattress, indicating her extramarital escapades.

Other symbolism within this painting includes the sea shell with bullet holes, water leaking from the shell and local plant life, all representations of her pain and longing to return to her cultural roots, mixed with her own physical pain.

This painting is deep and heavily layered, acting as a cathartic release for Kahlo, enabling her to share her thoughts with her audience.  It has a melancholy feel, as the artist reflects on her life within the tub.

Kahlo died at the age of 47, but her life was well documented, enabling this picture to be translated with ease.  She was well known for representing life as it was, especially within her own portraitures, never making herself more or less attractive than she actually was, her art showing an openness and honesty about her life, her pain, her passions and her fears.

Whether you love or hate feet, this painting is a beautifully sad rendition of a biography through art.  How do you feel about it?  Do you see something I have missed?  Why not tell me in the comments?

2 thoughts on “What the water gave me – Frida Kahlo”