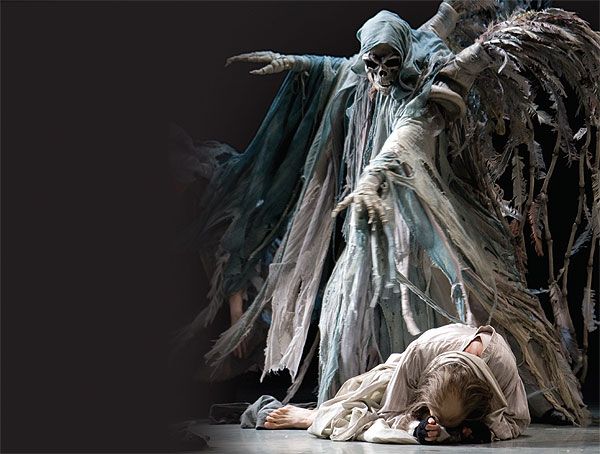 Possibly the most daunting of the three ghosts… if you can categorise levels of spirits and the manner in which they haunt you, considering finding an unknown entity in your room that doesn’t have your door key, can be a little unsettling.

The picture above is showing the costume design by Lez Brotherson for the national ballet.  For me, this costume and the picture, embodies the full fear of having what is essentially the grim reaper, showing you your fate.  Now I do feel that there is one fatal flaw in this set up, which is, everyone dies.  It is one of those certainties in life, as my grandmother used to say, “the only thing certain in life is birth, death and taxes”.  So with that in mind, I am not sure why the inevitability of death is that daunting to Scrooge.  Regardless, the skeletal figure, in it’s shredded and disheveled robes, its boney fingers, outstretched and lack of verbal recourse, forcing Scrooge to make his own assumptions on what he is being shown.    It’s a really striking image, and Brotherson has created the look of the character, to pretty much what I imagined when I first read the book.

In this final visit, Scrooge is first shown three businessmen who are discussing a funeral.  One comments that he would go to it but only if lunch is provided.  Scrooge assumes that the funeral is of someone not very well known to them.  The next thing Scrooge is show, are members of his staff, such as his char lady and laundress as well as the undertaker stealing personal belongs of the deadman, and selling them to a local buyer of stolen goods.  Scrooge sees the shrouded corpse and he begs the ghost not to reveal its face, in an act which seems to tell the reader/audience Scrooge already knows who the dead man is, but doesn’t want to admit to it.

Scrooge pleads with the ghost to show him someone who has emotions for the dead man, and he is shown an impoverished couple who are indebted to the man, momentarily celebrating as they will now have longer to settle the debt.  Scrooge then asks to see some tenderness, which the ghost takes some form of mercy and shows him the mourning Cratchit family over their loss of tiny Tim.  This is a very different scene than that of the previous two, with the family gathered and revisiting good memories of the boy as they bid their farewells to him.

Finally the ghost takes Scrooge to a run down graveyard.  Showing him his own grave, with a headstone and the ground readied for the casket.  Scrooge now fully realises that the dead man that was being spoken of, and that the couple were celebrating his death, was him.

Scrooge, now wishing to change his ways begs the spirit to sponge away his name from the headstone so that he may reform.

I think we all know what happens next… Scrooge wakes up the next morning, Christmas day, tells a young boy to go and buy the biggest turkey in the butchers (apparently no festive closing in Dickens time, and no worries about the turkey being cooked in time to eat) and he drags all the people he can find to have a Christmas day celebration like no other, imposing himself on the Cratchit family (expecting poor old Mrs. Cratchit to cook that lumping great turkey), as he writes off debts and gives his staff pay rises.

It’s a lovely story, and obviously despite my flaw finding, it is one of christmas cheer in the end, so these ghosts should leave you with a warm fuzzy feeling.

The ghosts have been attributed to an allegory of the Christian faith, and the cycle of redemption which sinners go through.  The reaslising the error of their ways, the discovery of perception and finally the redemption.  While not exclusive to the Christian faith as we all go through this cycle, whether we are religious or not, it does support the giving to others and how a giving lifestyle can bring you happiness.

What do you think of the costume?  Do you think I missed something in the allegory? Why not tell me in the comments?  Like what you have read?  Why not share it?

3 thoughts on “Christmas yet to come – Lez Brotherston”