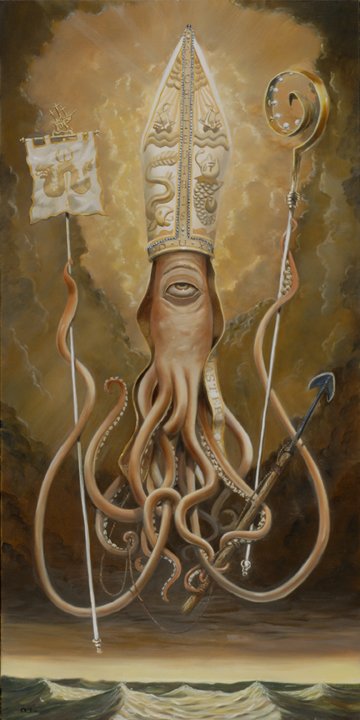 Did you know that a squid has three hearts?  This is possibly one of my favourite facts.  Simply because it is quite difficult to work in to a conversation how many hearts a squid has.  Now that I have told you this, I am hoping that you will all be looking for the opportunity to work that in to a conversation.  Which then means I should give you the reasoning for the three hearts…

Olsen created a beautiful image of a saintly squid in this painting which was completed in 2008 and the artist himself says about this piece:-

“Saint Architeuthis is the patron saint of doomed sailors. While the origins of the saint remain unclear, it’s recent history and worship are well documented. Whalers who turned their attention to catching giant squid and sea serpents in the 19th century, began asking Saint Architeuthis for mercy whenever a hunt would go awry, which was fairly frequent. When hunting for such animals, one would sometimes be thrown overboard or a boat would sink exposing the men to whatever was in the water at the time. A sailor would ask Saint Architeuthis for the quick and relatively painless death of drowning, rather than the hideous demise of being ripped apart by the beak of the squid or chewed up in the sea serpent’s hideous maw. Often, men would have visions of Saint Architeuthis who would appear before them in the form of a gigantic, yet benevolent squid wearing a bishop’s mitre and carrying tools of the squid hunter’s trade.”

I love the fantasy world which has been weaved along with this painting.  The squid looks so serene in his papal attire hovering above the oceans depths.  The golden light in the background making this whole piece feel heavenly.

Architeuthis is a strain of giant squid, which can grow to the size of around 13 metres (for males) and these are second only to the colossus squid (which is one of the largest living organism).  Olsen has capture the anatomical correctness of the squid with its mantle hidden by the hat, but the two elongated tentacles baring staffs.

I would image you are all quite familiar with the image of a giant squid pulling a boat under the waves in anything but a benevolent act… infact old tales seem to indicate that the squid’s vengeful actions were unprovoked, so this saintly image now challenges how we see this fearsome creature. 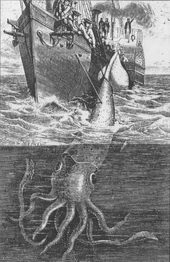 You may be aware that the patron saint of sailors is more commonly known as St. Nicholas (because we couldn’t let him get away with just delivering gifts to children for one night of the year).  This was due to his ability to calm storms with prayers.  There is another Saint Erasmus of Formiae, also known as Saint Elmo, may have become the patron of sailors because he is said to have continued preaching even after a thunderbolt struck the ground beside him. This prompted sailors, who were in danger from sudden storms and lightning, to claim his prayers. The electrical discharges at the mastheads of ships were read as a sign of his protection and came to be called “Saint Elmo’s Fire”. Saint Elmo’s Fire was usually good luck in traditional sailor’s lore, but because it is a sign of electricity in the air and interferes with compass readings, sailors sometimes regarded it as an omen of bad luck and stormy weather.  Neither in my opinion are quite as exciting as a squid being a patron saint though.

If you want to see more of Olsen’s work you can find it here.

I guess that you are still wondering why the squid has three hearts as well… two are used to power the lungs and the final one to power the rest of the system.  When the squid makes its quick get away, the propulsion comes from the lungs, the power to push the air out of the lungs managed by the individual hearts… and yes, I do think that the squid is an awesome living creature.