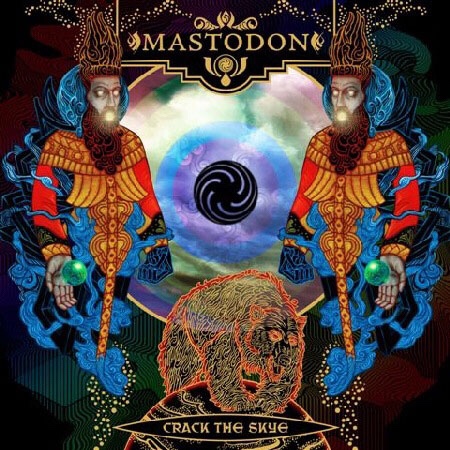 I’m always up for promoting new writers, and today is no different, so I present to you a review by Rob Turpin.

Still Cracking The Skye; 8 years on.

It all starts with a few notes. As most musical journeys do. The first few of them rattled off from the guitars of Messrs Kelliher & Hinds which begin said journey in earnest. Those first opening seconds giving little indication on what is to follow. On such earnest openings are epics built however, and it certainly would not be too fanciful to go as far to call Crack The Skye an epic.

Opening as it does with its strongest possible weapon; Oblivion (the bands second most successful song commercially – apparently -but more importantly a fan favourite)  Crack the Skye doesn’t so much grab you by the scruff of your neck and bark at you until you submit to its aural demands like its predecessors; Call Of The Mastodon, Remission and to a lesser extent Blood Mountain. Instead, Crack The Skye furthered the modest experiments of Blood Mountain for melody over murder and as Brent Hinds best put it in an interview with Guitar World back in Feb’ 2009 “it’s awesome that we can step back and have melody and not blow your voice out by screamin’ all the time…and guitar solos – I mean, who doesn’t fucking love guitar solos? …I live for that y’know what I mean?”…guitar solos and singing – stuff like that. Early in our career there were no guitar solos the music was so fuckin’ goddamn fast and crazy you couldn’t put a guitar solo in there!”

It’s not to say that Crack the Skye doesn’t get up there and challenge you to fistfight in the shit-pool before summarily kicking seven varying shades of shite from you – because it does that absolutely in songs such as the titular Crack The Skye – with Scott Kelly providing all the gruff bluster that would make the Mouth Of Sauron tremble in his dark riding boots – it’s just that as an album it can do that but still provide  achingly beautiful  guitar melodies,  poignant lyrics that never stray to the pretentious (perhaps like this starry eyed waffling your reading right now does) and sometimes it does all that in the same song (see once again the Crack The Skye above).

Those aforementioned guitar solos that Hinds alluded to; never outstay their welcome but build, swell and release all at the perfect time. Nothing rushed, a million miles from the frantic formative years. “Who doesn’t love fucking guitar solos” indeed.

Crack… still to this day plays majestically. Once it has you in its sonic vices it doesn’t let go – like an old dog with plenty of bite left. Despite its pulsating opening few tracks ramping  up the tension in peaks and then poignant, almost mournful valleys, it creeps in with subtlety once again at the outset of The Czar. Those few notes once again. That seemingly simple but hauntingly delivered little sequence. To be honest I still don’t fully know what it’s played on though a glance at the albums personnel suggests it could be Rich Morris on Mellotron or Synth. Frankly I rather like not knowing precisely what it is that makes those atmospheric little noises at the start of the album’s middle-order belter.

But after the calm, the storm, somewhat inevitably. The Czar brings the thunder in its mid-section though as the Usurper, Escape & Martyr hammer down that sequence of glorious unparalleled riffing followed by the Troy Sanders vocal leading us on a gallop across 19th Century Russia to escape our imaginary pursuers. (What? Well it’s what I was imagining okay?). After the fire comes a different kind of burn; the Spiral which closes the epic 10:54 to the end of its’ running time bring that trademark Crack The Skye blend of melody and brute force.

The album closes with excellent tracks such as the frantic melody driven riff of Ghost of Karelia with its continued trademark Crack The Skye (TMCTS here after!) light and dark. That driven breakdown just hammering at you. Impressing  on your frontal lobe; impossible to ignore.

Hind’s delivery is never knowingly undersold and he punctuates his punches perfectly with the rampant drive of the song.

Crack the Sky (the song itself this time) I’ve touched on briefly – thousands of words could be written about that alone but probably by more articulate minds then this starry eyed wonderer – but it leads beautifully into the albums all-out-ender The Last Baron which sweeps, soars and at times pulverises.

Perhaps I was a little remiss , unfair even,  to say rattled off earlier when what they really are is purposely placed; the precision in perfection. The deep breath before loosing the screaming arrow. Hinds said in that interview some 8, nearly 9 years ago that, “Now we’ve stepped back a little we can breathe.” –  Boy, did they take a helluva  breath.

2 thoughts on “Guest Writer – Crack the Skye – by Rob Turpin”