Did you know that during the years 1920-1940 the film industry instigated colour coding for good guys and villains in cowboy films?  Good guys got white hats and bad guys had black ones.  While this was a standardised convention during this time to assist audiences in categorising the characters the first time this was used was in the film “The great train robbery” in 1903.  William Boyd broke this convention in his depiction of Hopalong Cassidy, and the film “The Law and Jake Wade” also shied away from this convention.

You might wander why I am going on about Cowboy films in a post about George and the dragon, but there is, as always, method in my madness.  In this case, it is the use of the white horse to indicate the hero.

Uccello was an Italian artist and mathematician.  This painting was created in about 1470, and Uccello used the Late Gothic technique to create it.  This is seen through the stylised images and colours used, moving away from realism and more concentrating on the pageantry and action that is happening in the scene.

Uccello was known for his pioneering work on perspective, and while we might not see it now, because we are very used to seeing paintings with depth of field, Uccello was notably obsessed with this and would spend hours trying to grasp the exact vanishing point.

I think you should all know the basic story of George and the Dragon, but I am going to go through it, just in case anyone missed this when they were growing up.

Silene (somewhere in Libya) had an issue.  There was a giant, venom spewing dragon living there.  It had taken residence in a lake and was poisoning the countryside around it.  To try and stop the dragon impacting the city, the King decided to offer sacrifices of sheep to try and appease the dragon.  This worked for a short time, but the King saw that he needed to offer more as the dragon became agitated with the meager offerings.   The sacrifice went from 2 sheep to a man and a sheep, but this obviously wore thin with the subjects, with no one jumping up to be the next offering.  This meant that the city put together a “Hunger Games” style lottery, to pick the next sacrifice, and the “winner” could be man, woman or child.

This seemed to be working okay, until the lottery drew the King’s daughter.  The King was devastated, offering all his gold and silver to anyone who would take her place.  Oddly no one was interested in this offer, riches really hold no baring once you have become a dragon’s lunch.  Reluctantly the King sent his daughter to her slaughter, dressed in wedding clothes.

As she was stood by the lake (personally I would have run off) waiting for the dragon to emerge, who should come riding by, but St. George.  He asked the princess what she was going lingering around near lakes, and she explained about the dragon.  She desperately urged St. George to run away, but he, very nobly, said that he would remain with her.

Just as they were talking about the dragon, it reared its head from the lake.  Quick as a flash, St. George lanced the dragon with his spear, and called for the princess to put her bodice around the beasts neck so that she could use it like a leash.  As soon as the bodice was in place, the dragon meekly followed the princess where ever she led it.

Taking the princess and the dragon back to the city, St. George said that he would kill the beast, if all the people converted to Christianity.  The King was so happy to have his daughter back, he complied, and St. George chopped off the dragon’s head.  The King build a church on the site and a fountain was installed.  The waters of that fountain had healing properties.

When I was a kid, this was not set in Libya, it was set somewhere in Scotland, and I certainly don’t remember the residence being made to turn to Christianity, but maybe enforced religion was not a great topic for children.

Uccello pin points the dramatic moment of St. George spearing the dragon.  Behind St. George we can see a storm, and his spear lines up with the eye of the storm, indicating divine intervention assisted with the easy defeat of the dragon.

I find the dragon really interesting in this piece, as firstly, Uccello has chosen to show a Wyvern, which is the head and wings of a dragon, the body and back legs of a reptile and the tail ends in a diamond or arrow shaped tip.  These are usually associated with heraldry and links in with the pageantry which is being shown with the gallant white horse and the heavily armed Saint.  Secondly, it’s wings are patterned like a butterfly, possibly an indication of the true fragility of the beast.

I saw this painting in the National Gallery, and I can’t say that I loved it on first viewing, but the dragon stuck with me, and since then I have looked at it over and over and it has started to grow on me.

I think that the reason the dragon stuck with me, is because it reminded me of something else.  A very small amount of research helped me figure out what that was.

It is thought that this painting inspired the illustration of John Tenniel’s Jabberwocky for “Through the looking glass, and what Alice found there” by Lewis Carroll. 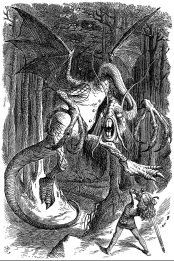