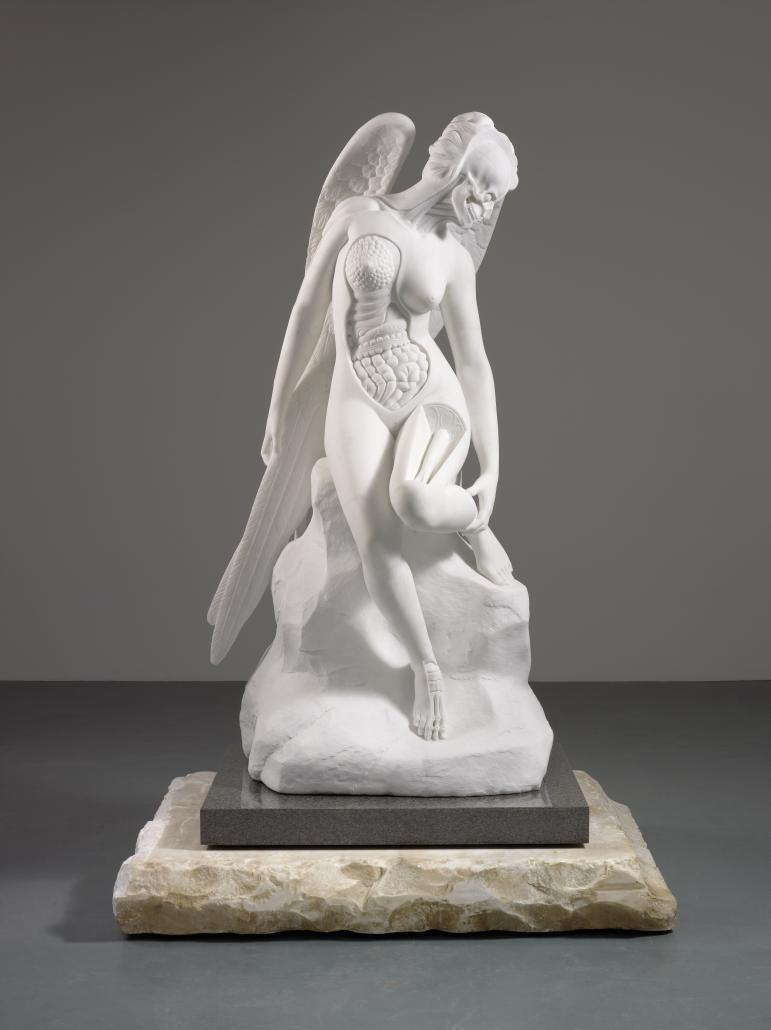 “Beauty is in the eye of the beholder.” Or so they say, but it’s funny how diverse some views on beauty are, whereas others appear universal.  I can’t think of anyone who would say a sunrise isn’t beautiful, so we appear to be unilaterally in agreement on that being delightful, yet when it comes to things like art, or people or objects, views range far and wide.  I find it especially intriguing when you hear about the diversity in what others find attractive.  I could look at someone and think that they look like the back end of a bus (I rarely do this! I am not that sort of person) yet someone else could find said backend the most stunning thing on the planet.

You might wonder what my  first paragraph rambling has to do with Hirst’s sculpture of an angel, but as usual there is method in my madness.

This sculpture was created as part of the “Beautiful Inside My Head Forever” works in 2008 and is on display in Ekebergparken, Oslo, Norway.  It has been created out of carrara marble, which if you know your marble you will know, it is one of the favoured mediums, and has been used by greats such as Michelangelo.  The marble has a high quality and can be white or blue/grey which lends itself so well to the creation of beautiful statues.  It has a fine grain which allows the artist to work in minute detail without the fear of chipping or smashing the block.

What you see in this sculpture is an angel, asethically pleasing in form and classically posed.  If it didn’t have sections cut out showing the anatomical parts of her, you could easily believe that this is something from the renaissance period.

Hirst has captured something really very intense and detailed in this whole body of work, as he crosses over the line between art and science.  We know that between the 1600 and 1700 artists and physicians worked almost in tandem to understand the workings of the body.  How muscles and internal organs fitted together to enable the body to move and function.  Obviously the outcomes were very different for each practice, with artists wanting to represent muscle tone and movement in their work, whereas the medical trade wanted to actually cure people, but for the purpose of knowledge, the two crossed over in battles for gaining bodies to dissect and study.  This lead to an era where art work highlighted the grotesque and gruesome as the knowledge heightened.  Certainly some artists, such as Da Vinci, were streaks ahead of the medical profession in his understanding of the construction of the body and what artistically made images of beauty.

Hirst’s angel is a homage to the artists of the past.  Through dissecting parts of her body, but leaving others parts in tact, you can truly see what artists were striving to achieve. 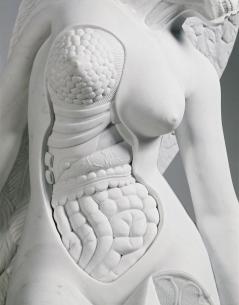 In this close up, you can see her delicately sculpted body on one side and her anatomical form on the other.  The detail of breast, ribs, stomach and intestine on view, taking the angel from something mysterious and magical, to an earthly being just like you or I.

The same goes for her face, on one side, her classically attractive face, peaceful and serene, the other side, her skull exposed, eyeball and tendons displayed.

This statue is based on Alfred Boucher’s sculpture ‘L’Hirondelle’ (1920), which I think he has not only done justice to, but enhanced superbly.

I think that the marble lends itself to giving the angel an unearthly feel, as she is heavenly white.  The anatomical structures are there to say that angels are just like us.  Angels are defined as being the intermediary between God in heaven and the mortals on earth, which is why they are seemingly humans with wings and why the very good among us (if you are a believer) can expect to become one in another life.  This form was created to make mortals feel at ease, but Hirst brings another perspective to this interpretation,  showing the audience the origin of where the angels (or depending on your perspective where humans) came from.

This serves as a reminder, no matter if you see someone as the back end of a bus or an angel sent from heaven, we are all the same on the inside.

7 thoughts on “The Anatomy of an Angel – Damien Hirst”