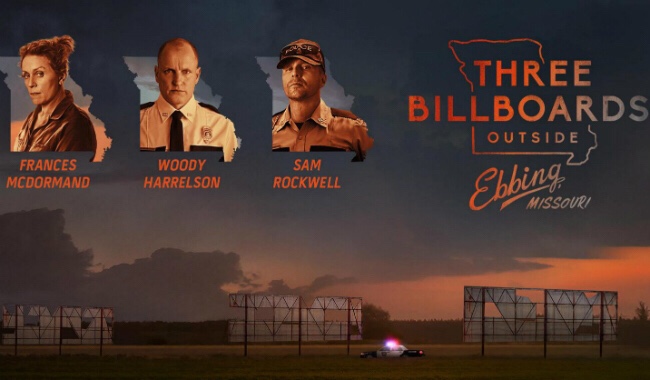 Sometimes you hear about films and the title just sounds dull. I mean what could be exciting about 3 billboards really? If I hadn’t seen the trailer for this film, I probably wouldn’t have looked in to it and just passed it off as some twee drama (a bit like I have done for “Phantom Thread” and I have seen the trailer for that), but this is one of those films where the title is completely misleading. If you have heard (of haven’t) of this film and like me and my initial reaction, was to momentarily ponder why anyone would want to revolve a film around advertising vehicles, think again and don’t judge a book by it’s cover as this film is a heart wrenching gem.

As ever, this film is pretty new out in the UK, so I wont talk through the actual storyline, but be warned there may be some unintended spoilers.

The thing that hit me about this film is how raw and how clever it is. This film deals with issues such as murder, rape, cancer, homophobia, racism, police brutality and domestic violence, which all sounds completely depressing, which they are, but the horrendously clever script elevates the situations from something that could leave its audiences shocked and emotionally drained to a film that you will find yourself laughing out loud at. Martin McDonagh has done an amazing job of ensuring that there is a quick pace to situation and dialogue so that the audience isn’t left to linger too long in the hardness of what is happening and portraying the hardened attitudes of the characters he has created.

The performances of the actors are second to none. Mildred Hayes (Frances McDormand) is the mother of a girl who was brutally raped and murdered and is seeking justice, but after 7 months of little activity and no arrests, she decides to take matters in to her own hand. Her hard nosed attitude to the situation and peoples actions around her, make her a joy to watch. McDormand has brought this character in to her own, with a performance which allows the tenderness and pain of this outwardly intimidating character to shine through. William Willoughby (Woody Harrelson) is the Chief of police with what almost appears to be a bumbling police squad below him. He displays the same hardened attitude, which most of the residence of Ebbing seem to have, but also has a compassion for the people around him, choosing to see the better side of them as he struggles with his own personal issues. Jason Dixon (Sam Rockswell) is a racist, homophobic police officer who Willoughby keeps on a tight leash. He has low IQ and would rather act first and not think at all, yet his character goes through a transformational journey through out the film.

The cinematography is almost timeless. It is very difficult to determine what era this is supposed to be set in (I would have guessed the 80’s until someone said the line “I’ll just google that”) which lends itself to making this a story which you could believe was loosely based in reality (even though it is not). There is a grittiness to the way in which the sets and scenes are set up, which adds to realistic presentation. No one looks “screen perfect”, by this I mean, you can see the wrinkles and the tiredness of the characters.

This film lingers in a world that is pained and angry through the feelings of grief and loss, as well as hatred and fear, and has very poignant moments of clarified thinking. You can empathise with just about every character and how they have reached the points in their lives which are shown in this wonderfully dramatic piece.

This is another film that I would urge anyone to watch. Go in to it with an open mind and let it take you on it’s darkly humorous turn of events which come at you with a cataclysmic force.