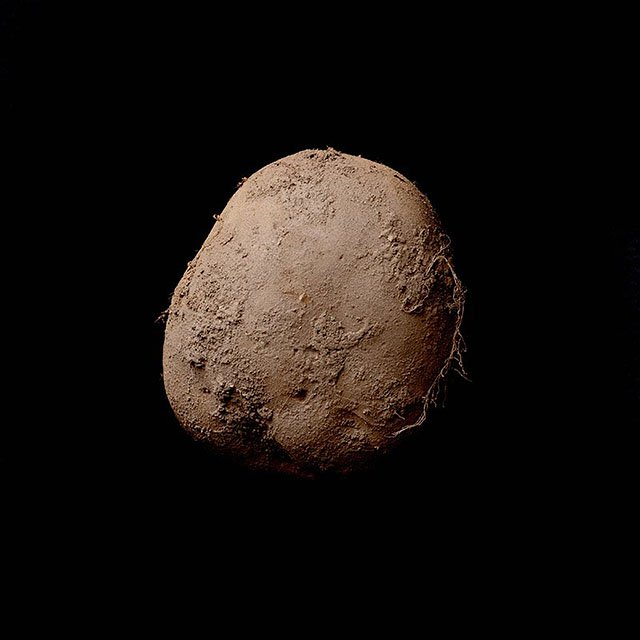 There are days when you wake up and think that the world has gone mad.  This is usually over some crazy news story or someone I know doing something particularly idiotic.  You know the type of story… Man in the back of beyond says that he has absolute proof that aliens are living in his armpit, or ‘The Daily Mail’s’ claims of what causes/cures cancer (if you are interested you can find the list here ).  So you can imagine me raising an eyebrow as I read about the photo of a potato which sold for approx. €1,000,000.

Abosch is a renown photographer who has shot the greats and is well known for his stark portrait work with a black background and the subjects in colour, training the eye to focus solely on the person with no other distractions, such as his 2012 portrait shot of Bob Geldof:-

Abosch’s work has graced the covers of magazines such as ‘Vogue’ and there have been several retrospectives of his work displayed in  places such as Serbia and his home country of Ireland.  There is now a permanent display of three of Abosch’s photos in the National Gallery of Ireland (Bob Geldof is included in this display).

In 2010 Abosch took a series of three photos which involved the humble Irish potato.  At the back end of 2015, so the story goes, a wealthy businessman spotted the photo of the potato (after a few glasses of wine) and decided to by it.  Two weeks later the price was set and the sale made.  The price of which puts this photo into the top twenty of the most expensive photographs sold.

Abosch is said (an apparent quote by PetaPixel his studio) to like photographing potatoes as they are like people… all different but easily identifiable as the same species.

I have several issues with all of this.  Firstly, in the world of digital art, what is stopping me going on to Abosch’s website, printing this photo out and displaying it on my wall without the need to pay €1,000,000?  Ok I wouldn’t own the rights to the photo and I am not displaying for commercial reasons, but for my own personal viewing, I can google this image and look at to my heart’s content, which leads me to think that perhaps owning the sultry potato is more of a status symbol that actually wanting the photographic rights itself.

Secondly, while it is a very nicely lit and well composed photo… It is of a potato.  Not even a very attractive potato at that.  I know I can get on board with most art, but this one baffles me.  I have photos that I have taken of “things” which I find really interesting (like a storm drain cover) but I would never dream of displaying it as it is simply something that fascinates me.  So where does the line between art and a photo of something mundane start and end?  Personally I don’t see that this has much artistic merit or integrity other than using the same format that Abosch uses for his portraits.

I have said many times, that beauty is in the eye of the beholder, and that art is a very subjective business, but for once I am unable to see the aesthetic side to this.

With the many, many wonderful photographs we now see in the media, be it a magazine, on social media, or framed on a wall, it astounds me that this would make the top twenty for most expensive photographs ever brought.

What do you think of potato #345?  Why not tell me in the comments?

This is called Rhine II and was taken and photoshopped by Andreas Gursky in 1999.  This sold for $4.3 million in 2011.  This could set me on a whole new rant but I think I will leave it open to you lovely readers to comment.