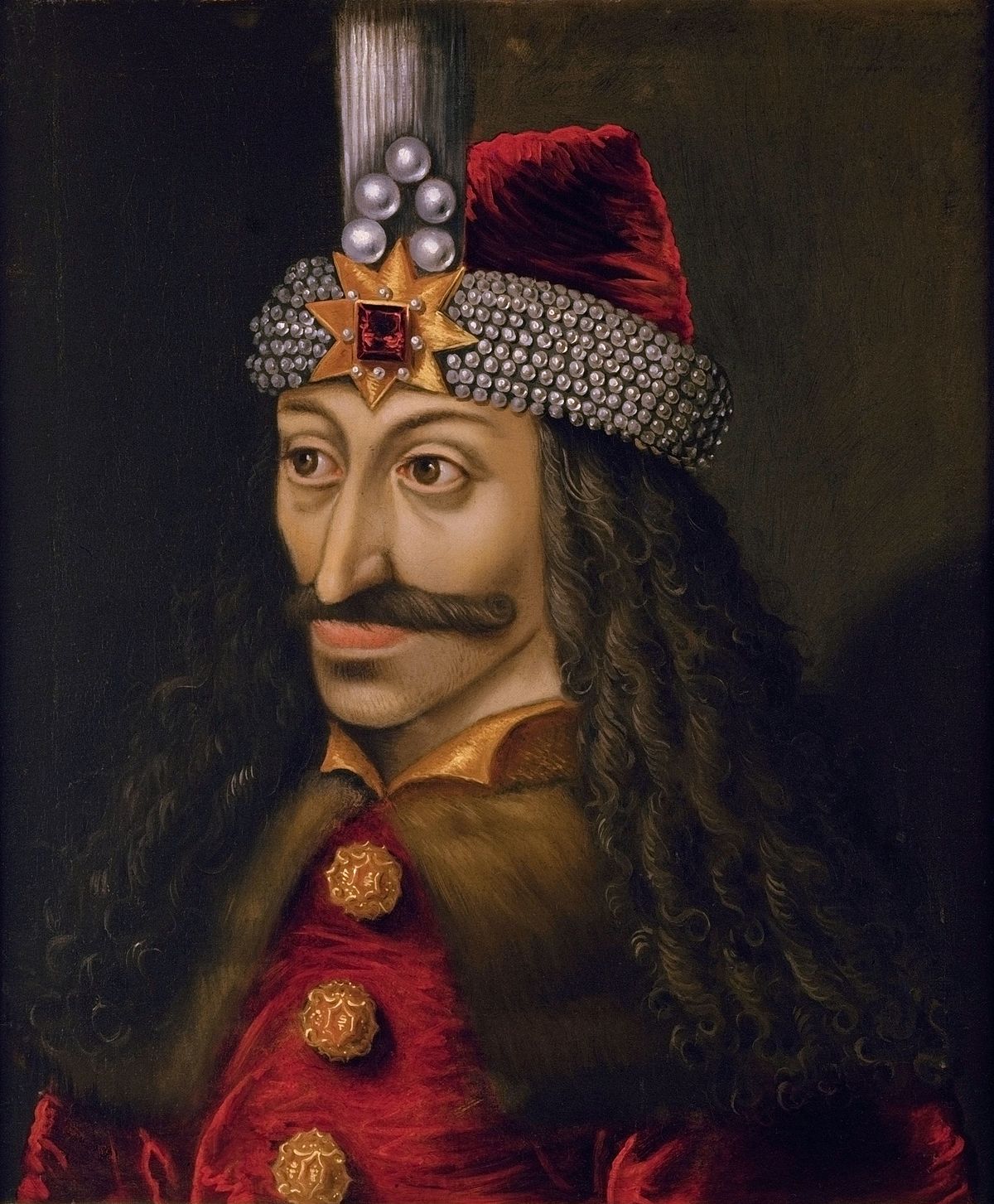 Do you remember ‘Ghostbusters 2’?  You know the one where a picture tries to get a museum worker to steal a baby so that it can put its spirit in it.  Under the streets of New York there is a river of reactive slime and the statue of liberty is brought to life?  Do you remember the guy in the picture?  Vigo the Carpathian… No?  Let me jog your memory…

You may wonder why under a post about Vlad the Impaler I am asking you if you remember a film about ghost capturing, bungling heroes.  My interest was peaked last night, when the film was on, wondering where the idea of Vigo came from.  Wouldn’t you know it, the character was loosely (very loosely I would say) on Vlad.

Looking at the pair of them, you would be forgiven for thinking that Vigo looks a lot more terrifying than Vlad, but that is what Hollywood does for you.

Vlad Tepes (or the Impaler if you would rather) lived between 1428 (might have been 1431 the documentation is a bit sketchy) to 1477 and was the prince of Wallachia three times between 1448 and his death, and his life was fraught with war and terrorism.  His story is far too chequered for me to break down into a logical order but all you really need to know is, if he wasn’t at war, he was probably imprisoned.

You might know that Vlad was also said to be the inspiration for Bram Stoker’s Dracula.  This initially stemmed from his father receiving the name of Dracul, after joining the order of the dragon who were dedicated to halting the advances of the Ottoman empire into Europe.  The involvement of his father in this order, meant that Vlad and his brother Renu were held as political prisoners by the Ottoman empire and were only released when their father agreed to pay a yearly tribute.  During their imprisonment, the boys were tutored in science, philosophy and the arts as well as swordsmanship and the art of war.  While they were released, Vlad’s father and his eldest brother were brutally murdered after the release.  Renu had actually taken quite well to the imprisonment, and eventually forged a friendship with the Ottoman sultan’s son, converting to Islam, where as Vlad was not so happy about it despite his learning from them.

Vlad is quite well known for his barbaric behaviour, he was called Vlad the Impaler after all, but it is usually overlooked about his terrorism tactics.  The implaing of his enemies was not just a good way to kill people, but sent a clear message to his enemies.  In 1462, when the Ottoman Sultan turned up at Vlad’s city,  Târgoviște, we was met with no soldiers, just the rotting remains of Ottoman prisoners of war on spikes.  While this didn’t immediately turn him away, he wasn’t rushing to the city gates either.

Another account shows that Vlad got his army to dress in Ottoman attire.  They did a midnight raid of the Ottoman camp, with the intention to kill the sultan.  While this failed, what this did achieve was the Ottoman army staying up all night slaughtering each other in the belief that their comrades were actually the enemy.  This seems a very easy way to quickly deplete a not particularly clever enemy.

The Ottoman empire was far larger than Vlad’s own, so what we see now as his notorious acts of terror, could actually have been psychological warfare from a man who knew his army based on numbers could never win.  You know what they say… brain over brawn.  Vlad did kill tens of thousands of Bulgarians and Turks within the Ottoman empire, and had the reputation that went alongside his blood thirsty nature.  In fact there are many pictures of his impaling efforts, and a few dicipting acts such as the time he nailed turkish diplomats turbans to their heads.

What adds to the belief that Vlad was inspiration for Dracula, aside from his father’s namesake, is that there were reports which stated that Vlad liked to drink the blood of his victims.  In some cultural traditions, it is noted that drinking the blood of your enemies imparts strength from them, nonetheless, it’s not a socially acceptable passtime.  There is a German poem about Vlad which suggests he would dip bread in the blood from his captors and dine on it.  There were also suggestions that Vlad would wash his hands in the blood before dining.

Now, while this is all kind of creepy, there is also a folktale about the Moroi, which assists with the whole Dracula story which actually leads away from perhaps misunderstood Vlad, and more points to religious beliefs.  In Eastern Orthodox Christianity, there is no notion of purgatory, which opened an ethical question about what happened to children who had died before the chance of being baptised.  The story goes that the spirit of these children would roam around the countryside of the Balkan Mountains, feeding on the blood of cattle, before they were either accepted in to heaven or hell.  Farmers took to leaving a pot of milk at the gate for the Moroi for them to feed from to save their cattle.

Vlad died fighting, as you would expect, but stories of him keep is name alive our culture today, thanks to propaganda pamphlets made by his enemies, stories which use his despicable nature as the bases for their evil protagonists and the local folklores.