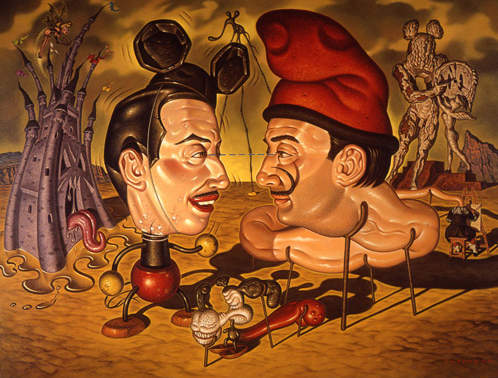 When I was a kid (and to an extent now), I loved watching Disney films.  I drove my brother to distraction (he is 18 years older than me) watching “The Jungle Book” and “The Fox and the Hound” repetitively.  As I got a bit older “Alice in Wonderland” became a firm favourite as it brought to life the surreal adventures of a young girl thought up by Lewis Carroll.  I realised quite early on how animation could really achieve anything, which could be why I became such a fan of surrealism as an art form.  I mean, what is more surreal that a talking mouse and a dog that can talk, owning a dog that can’t (I am of course referring to Goofy and Pluto).

I think that this is why picture by Schorr appeals to me so much.  For me I see the genres which shaped my love of art, brought together in one picture.

If you don’t know much about Disney or Dali, as they seem like they should be polar opposites as one created entertainment for children and the other a surrealist artist, but actually they aren’t so far apart.  To create animated films that appeal to children, one could say that you need the imaginative brain, equally this is required for the surrealist artist, both looking to the mind working in a spectrum outside of reality.

These two created a union through mutual appreciation.  Disney had read Dali’s biography and wanted it signed so sent a copy of the book to Dali requesting his signature, Dali in turn was a fan of Disney’s silly symphonies.  From here a collaboration began.

In 1945 Disney and Dali started animation for a piece called “Destino”.  After creating only 2 minutes of animation the project was abandoned but the pair remained good friends.  Storyboards and sketches have made exhibitions from this collaboration, and in early 2000 the piece was resumed, going on to receive a posthumous Academy award nomination in 2004.

Below is the video so you can watch how this collaboration worked so well.  Taking elements from both Disney’s style and Dali’s to create something which I feel is a beautiful juxtaposition of the genres.

Schorr brings this juxtaposition to the forefront in his creation, highlighting the relationship between the two giants of their genres and melding their styles to create an image which supports the union which they achieved.  This picture was created in 1996, and follows the lowbrow/pop surrealism genre.

I don’t particularly want to get in to character assassinations of either Disney or Dali as they both had their flaws, and I don’t feel that these are brought to the forefront of this picture either.

I love how Schorr has utilised recurring elements from both artist.  Mickey Mouse being the iconic motif for Disney along with the magic castle, and then the soft form which Dali created being held up by struts, the long legged elephant in the background, but with Mickey ears.  The cross overs are endless.  There are, of course, touches of Schorr’s own personal touch in this piece, with a dark Tinkerbell hovering over a demented magic castle.  This could be a slur of the commercialisation of the Disney industry as Schorr’s work does usually point towards the downfallings of the human condition, highlighting things such as greed, jealousy, and our other shortcomings.