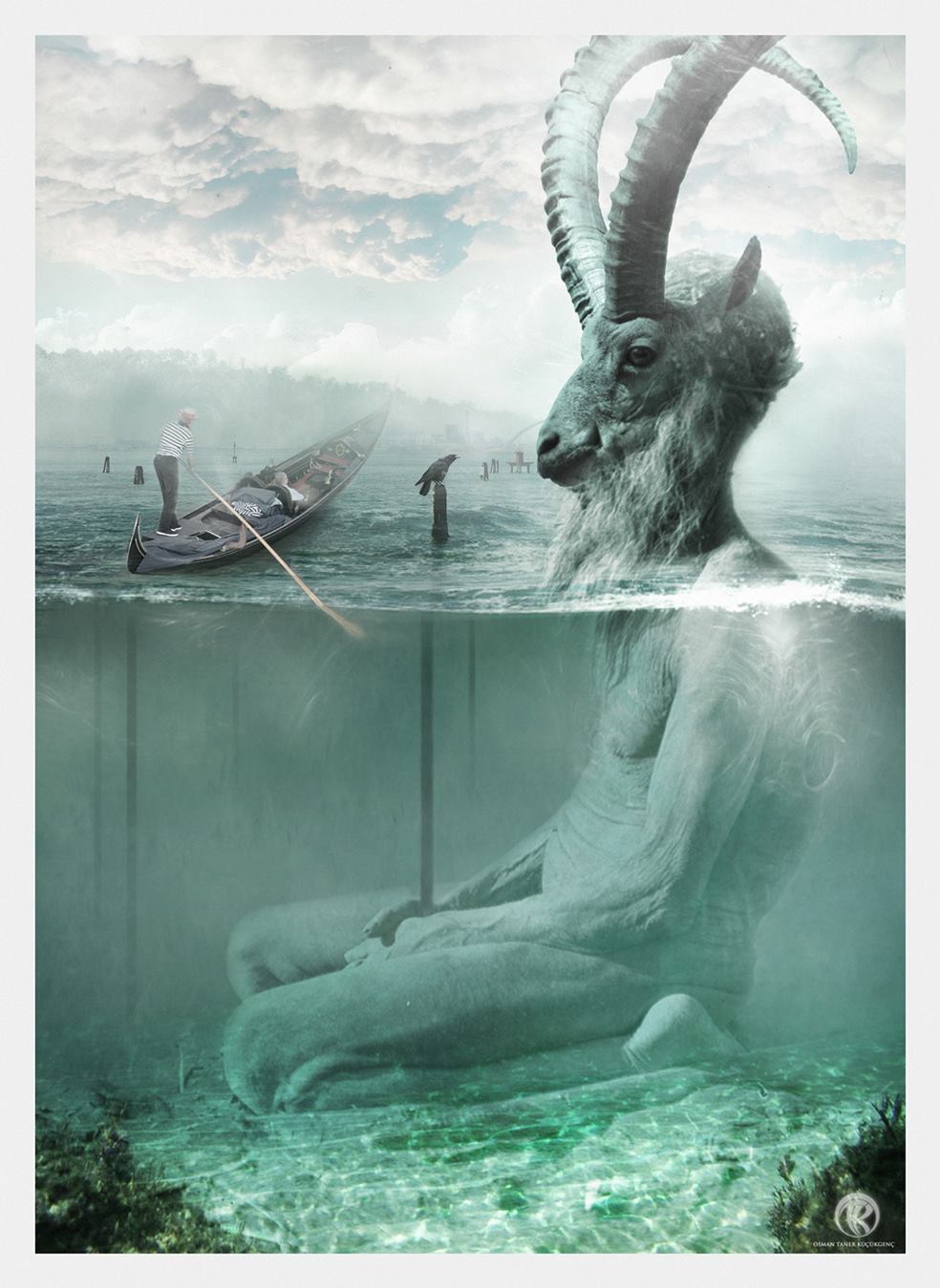 Depending on your outlook on life, you may believe in horoscopes or you might just think they are a bunch of hocum.  Personally I think that one horoscope reading a day/week/month for the amount of people that would fall under that star sign is a little far fetched, and they are kept intentionally vague to allow the reader to interpret what they want from it.  This said, there are certain qualities which people share, and sometimes these fall in to the categorisations of the star sign, but there are many other factors which could contribute to this.  As in life though, everyone needs something to believe in, to assist with their daily struggles, difficult moments in life, or just because there is a certain comfort in feeling that there is a path carved out in the cosmos for everyone.

This picture caught my eye as to me, it captures several aspects of belief, myth, legend and surrealism.  Küçükgenç presents the image of a goat headed man, knelt overlooking a boatman, his aged body beneath the surface of the water with a crow squawking in front of him.  With the title “South of Heaven” this comes from a series of pictures called “Lucid Dream”.  These capture a composite of human and animal beings which capture common beliefs across cultures from myths and legends.  The blue and green hues of the pallet used within this picture give it an ethereal feel, as if the audience have an insight in to the artist’s dreams but in an awake state.

In my interpretation of this picture, I first started to think about the star sign Capricorn – as we know that is the head of a ram with the body of a fish.  Honestly, when you look at the stars which have been mapped to this constellation, you really need a good imagination to see the half ram, half fish… 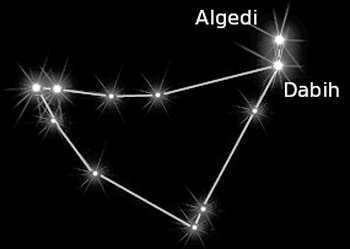 Ok, so its a triangle, let me help your imagination… 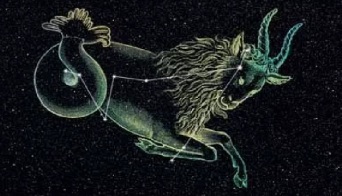 It makes so much sense now…doesn’t it.  Now you may wonder why I am telling you about the stars when I started with a ram headed man knelt in some water, but I think the key to understanding “South of Heaven” lays with the Greek and Mesopotamian myths.

In Mesopotamian readings, Oannes was a mythical being in the third century who taught mankind wisdom.  At this stage, he was defined as an amphibian, body of a fish and head of a man. Oannes came to land and taught the rudimentary ethics of civilisation, such as writing, the arts, law, agriculture and architecture, pretty amazing for a being that lived in water, but this doesn’t really explain how Capricorn came in to being a constellation, or how it got linked to the ram.  Don’t worry, I will get there.

In the eleventh century, Jewish bible commentator Rashi writes of a
Biblical tradition that the name Dāgôn is related to Hebrew dāg/dâg ‘fish’
and that Dāgôn was imagined in the shape of a fish: compare the Mesopotamian
fish-god Oannes. Dāgôn was thought to have been a deity associated with fertility and was a fish with the head and arms of a man.  There is a story about how the ark of the covenant was captured by the Philistines and presented at Dāgôn temple in Ashdod.  Each morning the people of Ashdod would find the carving of Dāgôn lay prostrate in front of the ark.  Each time, they would set the image right, and the next day it would be in front of the ark again, until one day the head and arms were severed from the carving, leaving Dāgôn nothing but fish.

Moving to Greek mythology, specifically looking at Pan.  I can hear you screaming at me already that he was part man, part goat/ram, so how could this possibly link with Oannes or Dāgôn, but I promise I have a theory.

Pan, usually seen as part man, part goat, was thought of as a fertility god, but was linked with lustful behaviour just for frivolity and was also worshiped as a god of spring, agriculture, woods and glens.  This is where it gets interesting, as Pan assisted Zeus in a battle against Typhon.

Typhon was a terrible creature.  He has been described as part man part serpent (a bit like the male form of Medusa), but he was the offspring of the greek primordial beings Gaia and Tartarus, who we know had some simply horrible children.  Typhon was gigantic and was said to have one hundred snake heads on his shoulders which could shoot fire and make the most unearthly noise.  He had unrivalled strength and decided that he wanted to challenge Zeus to be overall God of the cosmos as revenge for overthrowing his Titan family for the spot.

This ensued a battle of cataclysmic proportions.  Mountains were thrown and thunderbolts released causing all kinds of destruction.  While Zeus ultimately wins the battle and banishes Typhon back to Tartarus, there is a point where Typhon dismembers Zeus and steal his sinews.  Pan and Hermes come to his aid.  Pan let out a scream which ensued panic (yes that is where the word derives from), and confuses Typhon which then allows Hermes to steal back the sinews from the cave they had been hidden in.

As Pan tried to escape from Typhon, he dived into the nearby water, but in his haste transformed only part of him into a fish, his upper body remain goat like.  Zeus recognised his efforts in assisting him winning the war against Typhon and cast him up in to the stars as his transformed being.  His forethought in the battle showing his strength and wisdom.

So how do these guys all link up, and where does this come in to Küçükgenç “South of Heaven”?  Ultimately Oannes, Dāgôn and Pan can be considered part of the merman ilk.  They have the potential to be land dwellers as well as sea creatures.  Each of the three we have looked at have quality which cross over from culture to culture, which mainly focus on the agricultural and fertility.  All teach mankind the wisdom of how to create a civilisation, which we can attribute to their success as gods.  The things that change is really how they changes from being part man part fish and the introduction of the goat composite.

In Küçükgenç piece, for me, the aged body represents the wisdom which each of these Gods bestowed to man, there is an element of “teach a man to fish” with the boat man, although he does look more like a gondolier than a fisherman.  The naked body submerged under the water, gives the feel of the merman.  The being in the picture is placid and appears to be overseeing events, almost in a guardian form.  The head of the goat bringing in the greek factor to this interpretation.    Küçükgenç states that he likes to encapsulate multiple cultures which have crossovers within his art, and I think that this is a fine example of how he draws across cultures to bring them to the forefront of his work.

The crow on the pillar, is also a symbol of wisdom and prophecy.  In Greek mythology meant good luck to those that they presented themselves to.

Finally that boatman… The title of the piece is “South of Heaven”, which indicates hell to me.  I know I have been saying that there is a peacefulness to the goat headed being in this picture and that I feel that it has a Capricorn feel to it, but it is quite hard to ignore images of devils and demons which have goat heads and the bodies of men.  Personally, I think it is too placid to be a demon, but perhaps that is the prophetic side of this painting.  With the title of the picture in mind, this could therefore be interpreted as the river Styx with the very modern boatman in his striped shirt a representation of Charon who transported souls to the underworld.  The haze between the boatman and the land on the other side does give an almost desolate feel to his journey.

Really this is supposed to be a dreamscape so not everything is supposed to make sense within the artwork, but it certainly does point to a prophetic feel with a journey, guardianship and otherworldliness.