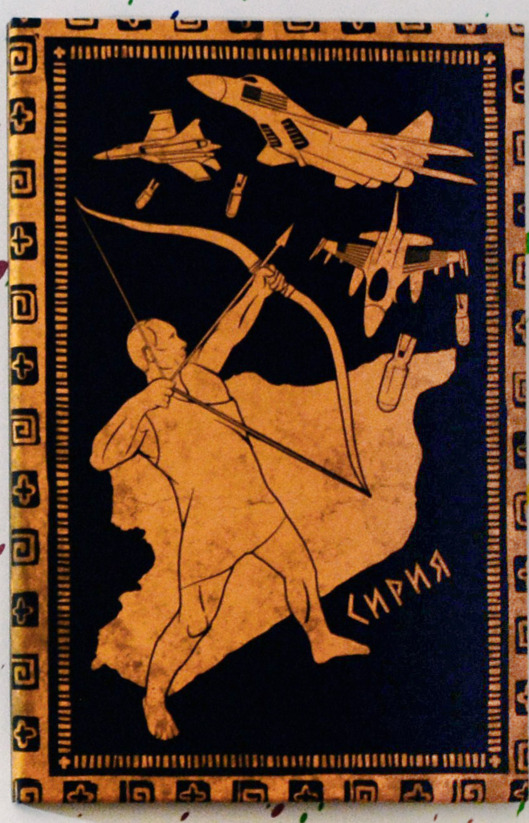 I don’t really know if you have been on tenterhooks or not for the next round of Putin as Hercules, but I am hoping that you are finding the perception of him fascinating!  So where were we?  Hercules had Killed the lion and the hydra and got the deer.  Putin has fought with terrorism, staved off Western sanctions and won the olympics.

Before I start the story of this one, this is possibly the most horrendous picture of the bunch (there is one other I hate).  This is why it is not the articles cover photo, as I really didn’t want this on display on the front page.  Anyway, moving on…

The Erymanthian boar, was a huge bad tempered pig, that would come crashing out of its den and gouge any living being with its tusks, and destroying everything in its path.  Herc was tasked with bringing the boar back… alive.

This story doesn’t really show Hercules in a great light, as on his way to find the boar, he stops to see his friend the centaur Pholus.  Pholus was greatly hospitable to Herc, cooking him food, but when Herc asked for wine, Pholus said he was scared to open the jar of wine as it belonged to all centaurs.  Herc in a nonchalant way, said not to worry and he opened the jar and started to drink.  Soon the other centaurs smelt the wine and turned up at Pholus’s cave, angry and armed with rocks that someone else was drinking their wine.  Herc, scared them out of the cave with light branches from the fire, and then chased the centaurs around, shooting his arrows at them (remember they were dipped in the blood of the hydra), Chiron the centaur (which if you have read anything else of mine you will know who he is… if not, follow the link) is wounded by an arrow, but doesn’t die.  Pholus intrigued as to what could kill a centaur so easily picked up an arrow out of his dead friend and while looking at it, the arrow slipped out of is hand and landed in his leg and killed him.  Herc returns to the cave, finds Pholus dead and buries him.

After the world’s most awkward bar brawl, Herc moves on to find the boar, which really was pretty easy as he could here it snorting and crashing about.  Herc then proceeded to run around the mountain scaring the boar until it was worn out. He then promptly netted it and took it back to Eurystheus.  This increased Eurystheus fear of Hercules as he couldn’t believe that he was able to capture and return with the boar.

Here we see Herc being careless with his arrows and taking advantage of the hospitality given to him.  He could have quite easily not have drunk the wine and poor old Pholus would still be alive.

Destroying the not-so-mythical “oligarch beasts”. When Mr Putin came to power in 2000 he vowed to destroy Russia’s oligarchs as a “class”.  The Oligarch being – a very rich business leader with a great deal of political influence.

Eurystheus seemingly had a bit of a sense of humour, as task number 5 was to go and clear the Augean stables in one day.  These were owned by King Augeas, and he owned thousands of cattle.  The stables were huge and with so many animals kept within it, it was very smelly too.  Herc approached King Augeas, not telling him that Eurystheus had sent him, saying that he would clean the stables in one day, and if he achieved it King Augeas should pay him with 10% of his cattle.  King Augeas, laughed knowing this to be almost impossible, so accepted the offer, sending his son to watch Herc in action.

When Herc got to the stables, they were overflowing with all matter of animal waste.  Herc looked around the stables and decided to knock a hole in both ends.  He then dug two trenches from two nearby rivers up to the holes in the walls.  The rivers flowed through the stables and took with them all of the waste, leaving the stables clean.  It’s not really clear about how they stopped the river flowing through, but I like to think that some kind of dam was fashioned.

When King Augeas was told that Herc had indeed cleaned the stables, he was not so happy.  He then found out that Eurystheus had sent him, and denied ever offering a payment.  When Herc challenged him on it, King Augeas told him to take it up with a judge.  This is exactly what Herc did and called the King’s son as a witness.  Obviously the King’s son was a good and upstanding citizen confirmed that his father had said that he would pay him with cattle.  The judge told the King to pay up.

While handing over the cattle, King Augeas banished Herc and his son from the kingdom.

This one is a stretch, but we see Mr Putin fighting off the horses of corruption.

The Stymphalian birds, were a large flock, which gathered around a lake.  Eurystheus had heard that these were man eating birds, so sent Herc to get rid of them.

Arriving at the lake, Herc has no idea how to get rid of the winged beasties, and just as he is standing there pondering, putting himself in great danger, Athena comes to him and gives him a pair of bronze krotala (a bit like castanets).  These had been forged by the gods so were any old castanets.  Climbing to the top of a nearby mountain, Herc sounded the krotala, which scared the birds in to taking flight.  As they did this, Herc shot them down with his bow and arrow and a slingshot.

I feel this story isn’t really that heroic… sure they were apparently flesh eating birds, but I am still a bit disappointed that they were defeated so easily… Don’t you think that all these big scary monsters scare so easily…

Mr Putin is depicted stopping Western intervention in Syria – a reference to Russia’s veto at a UN Security Council vote in 2012.

Again there is a mix of the old style Greek pottery, and some very horrible modern interpretation with far to many colours and the Roman tunic.

The more I look at these the more I find humorous and in parallel to how the Russian’s see their great leader (even if it is a little blind sided)… Theresa May could do well to learn a thing or two about public relations by taking a leaf out of Putin’s book – although I do not vote for the topless horse riding.