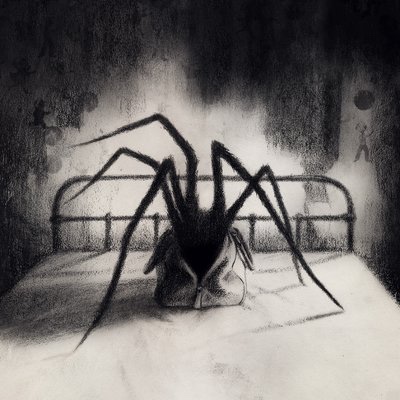 What do you fear the most?

Is it something physical? Spiders, balloons, fire, drowning? Or something more psychological? Abandonment, solitude, misunderstanding?

Matthew Holness, creator of “Garth Merenghi’s Darkplace” smashes in to his cinema debut in a way unlike any other.

If you have watched “The Babadook” or “Ghost Stories” you can probably get onboard films which play on atmospherics to enhance the fear, I will say now, I know that those sort of films are not everyone’s cup of tea, as they heavily rely on you feeling the moment, but I love this sort of film.

This film can appear confusing as it plays out, but actually it is very clever in its approach. This film was released on the 25th October in selected cinemas and is available for home viewing, so if you are planning to watch this film, I warn you now, there are spoilers within this article, so you may want to look away now, then come back when you have watched it.

Sean Harris plays Phillip, a seemingly dysfunctional and socially inept puppeteer, returning to his family home after a disgraced performance, along the way he approaches a young boy and acts awkwardly towards him.

Approaching his family home, which is run down to say the least, with a boarded up front door and overgrown garden, the viewers are introduced to Maurice played by Alun Armstrong, Phillip’s grimy and despicable uncle.

From here you are embroiled into a toxic relationship between the two characters which is heightened by Phillip’s creepy puppet – Possum. Possum has the face of Phillip but in a sickeningly white and waxy state as if stuck in permanent fear, the body is a giant spider with far reaching legs, Possum is carried around with Phillip in an old leather bag, which try as he might to get rid of Possum, it just keeps returning.

As the bizarre actions of Phillip continue, you are drip fed that the boy from his journey home has gone missing, presumed kidnapped and later dead. This comes to you in the form of a TV which only fights through its static to deliver this message.

Maurice taunts Phillip with stories of his past and continually offers sweets from a filth ridden jar, which if taken induces nightmarish almost unintelligible flashbacks.  Maurice also appears to have once been a puppeteer, having his own devilish dummy which he brandishes throughout the film.

Many of the scenes are of Phillip, almost on the verge of breakdown wandering around the Norfolk countryside, as he fights the demon of Possum.

Eventually his mental state is so peaked that he has to confront his uncle, leading to the all the answers of all the unsolved riddles. The last 5 minutes of this film are haunting and terrifying, as you realise that Phillip’s parents died in a house fire, and Maurice came to look after the orphaned boy, just leading to years of mental and physical abuse. Fighting back Phillip over comes Maurice, snapping his neck and finding the missing boy in a trunk.

That is the film in a nutshell, and only running at 85 minutes, it is cram packed with symbolism which alludes to the pinnacle. The house as a starter for 10, it is filthy and looks as though it hasn’t had anything moved in it in years. During very brief moments of clarity for Phillip the house becomes lighter and less dirty (it is never clean), The wallpaper in his bedroom is covered in children playing with balloons, bunches of which haunt Phillip’s nightmares, turning from a bright a vibrant yellow, to soot black, alluding to a lost childhood.

Possum is the biggest allegory of the piece, and for an inanimate object really is an overpowering character in the majority of the film. Phillip is literally carrying his burdens in a sack with him, which he peers into, releases then hides away, tries to drown it, throws it away, burns it, only for the ugliness to return. Possum is quite literally the monkey on Phillip’s back, although I found it really interesting that it was called Possum – a creature that plays dead to avoid attack. During the last scene with the abuse between the uncle and nephew, Maurice’s hands are elongated and appear like the legs of Possum as they are stuffed in to Phillip’s mouth as he almost plays dead to try and avoid the actions which are coming.

Both Harris and Armstrong give a sterling performance in these peculiar characters and as the torment between them builds, the presence of Possum comes to life through a book that Phillip has written. The words of the book are said throughout the film in a chilling nature, almost as a story told to children to scare them…

Can you spy him deep within? Little Possum, Black as Sin.

Holness has cleverly tapped in to almost every common phobia known, to bring to life his thriller, some very subtle, some there like the elephant in the room to bring to life a claustrophobic and heavily atmospheric piece.

This film is uncomfortable watching and as a viewer you will feel that you have been teetered on the edge of madness, but it is worth this for the clever manipulation of fear which Holness appears to have mastered, if you look on the Possum website you will see that Holness has referred to an essay written by Freud about the psyche of horror, which he has tapped in to so deeply.

Want to see what inspires me? Find me on Facebook/twitter/instagram by looking for WidowCranky.

Leave a Reply to The Eclectic Contrarian Cancel reply

Why are there so few women in art?