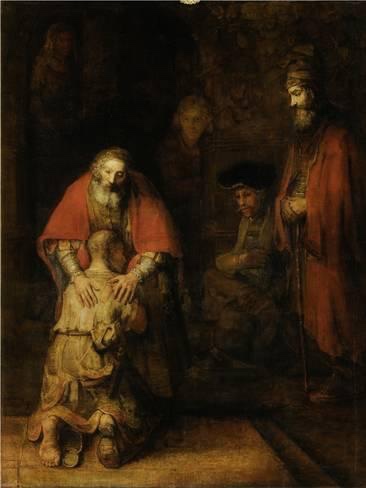 Forgiveness is a really hard thing isn’t it. We all like to think we can be gracious enough to forgive, but sometimes there are things which crop up and put little blockers in the way of being able to let go of the hurt, or the anguish that an act has caused you. It can take time to allow that to heal, and you know what – that is ok, as if you are worth anything to that person they will ride the storm with you, lets face it, if you are willing to forgive them rather than walk away they must be close to you anyway, and sometimes they just have to bear with you while that pain and anguish eases. It can be tough, it can be hurtful, but in the end forgiveness is a conscious and deliberate decision to release those feelings and be at peace with what has happened.

Now, you might think that my opening paragraphs are a little crazy at times, but what I like to try and do is bring you the emotions that I feel when I look at a piece of art, in a vane attempt to help you bring the piece to life, and for “The Return of the Prodigal Son” forgiveness is the key note of the piece.

I have had the pleasure of seeing this painting twice in person, and actually it is rather spectacular. It’s housed in the Hermitage Museum in St. Petersburg and art historian Kenneth Clark was quoted to have said about it:

“A picture which those who have seen the original in St. Petersburg may be forgiven for claiming as the greatest picture ever painted”.

I may not go as far as to say it is the greatest picture ever painted, as actually as Rembrandt goes, I am not a huge fan, but this one is probably one of his best.

This painting in among the Dutch artists final works, probably painted within 2 years of his death in 1669, but his fascination with the parable from the bible spanned decades, with him making sketches surrounding the story from around 1632 onwards. 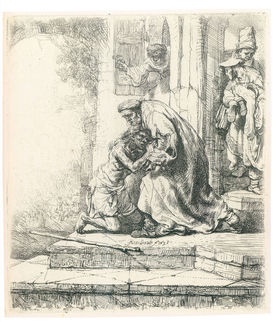 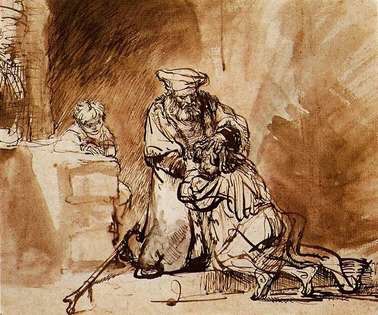 The parable itself is about a father with 2 sons. The youngest comes to him requesting his share of the inheritance, which the father gives him. The son travels to a foreign land and lives a lavish life style, wasting his money and being reckless. Soon the money runs dry and the son finds himself living destitute. Forced to take a job as a swine herder the son starts to reflect. (Swine herder would have been used as to Jewish audiences this would have been an abhorrent job with the consideration that pigs are deemed an unclean animal due to being cloven hoofed and eating anything that comes their way).

As the son ponders over his predicament, he realises that his father’s servants now have a better life that he does as they have housing and bread to spare, so decides to travel back to his home to beg to become a slave to his father.

As he reaches his home, he has a speech prepared:

“Father I have sinned against heaven, and in your sight. I am no more worthy to be called your son. Make me as one of your hired servants.”

Before the son can finish is speech, the father welcomes him in, calling for his servants to dress him in fine robes, and a ring as well as calling for a fattened calf to be slaughtered in celebration of his sons return.

The older brother who is working in the fields, hears the celebration and is told of the return of his brother and this angers him. He goes to his father and says:

“Behold, these many years I have served you, and I never disobeyed a commandment of yours, but you never gave me a goat, that I might celebrate with my friends. But when this, your son, came, who has devoured your living with prostitutes, you kill the fattened calf for him”.

The story ends with the father explaining that it is like the younger son has returned from the dead – lost in a wilderness, which he has now returned, and the celebration is necessary to commemorate him finding his way.

The story is a dedication to mercy and forgiveness in the face of what ever a person has done. The father in this story represents the holy father and treats the son with more generosity than is deserved. The younger son represents the brashness of human nature and the insolence that can come with youth. The older son represents a stream of thinking which is linked to law, reward and merit. The forgiveness represents a love for people which is above their imperfections and recognises their redemptions.

In this paintings, Rembrandt has captured all of these feelings. You can see the father and son in the centre left of the painting. The prodigal son dressed in rags, his head shaved, and missing a shoe and he appears as an outcast. He still wears his fathers dagger on his belt which he would have used to protect himself – indicating his fathers presence for the duration of his “lost” time.

In contrast his father is dressed richly, the colours striking in the piece to show the contrast. Look at the fathers hands, one is very masculine while the other more feminine, indicting parental love and care (the left hand is the masculine).

To the far right, the older son dressed in finery, looks down at the younger son in a contemptuous way, indicating his feelings of being hard done by, while behind are two figures which have been much debated in art history, some think it is the mother and possibly an advisor to the father, while others think them as servants come to dress the son.

The rest of the canvas is dark, enhancing the feelings between the main characters of the piece. The emotions within this painting are heightened as there is no distraction to background activity. There is no need to dress the scene in this painting for Rembrant to convey the very clear emotions of relief, anguish, forgiveness and contempt.

Above nothing else, this is a beautiful reminder of how embracing forgiveness can yield its own rewards, whether you are religious or not.

Have you seen this painting? Do you think I have missed something in it? Why not tell me in the comments? Like this post? Why not share it?

Want to see more of what inspires me? Find me on Facebook/Instagram/Twitter by searching WidowCranky. Want to own something I have made? Why not look on the sales page.

5 thoughts on “The Return of the Prodigal Son – Rembrandt”