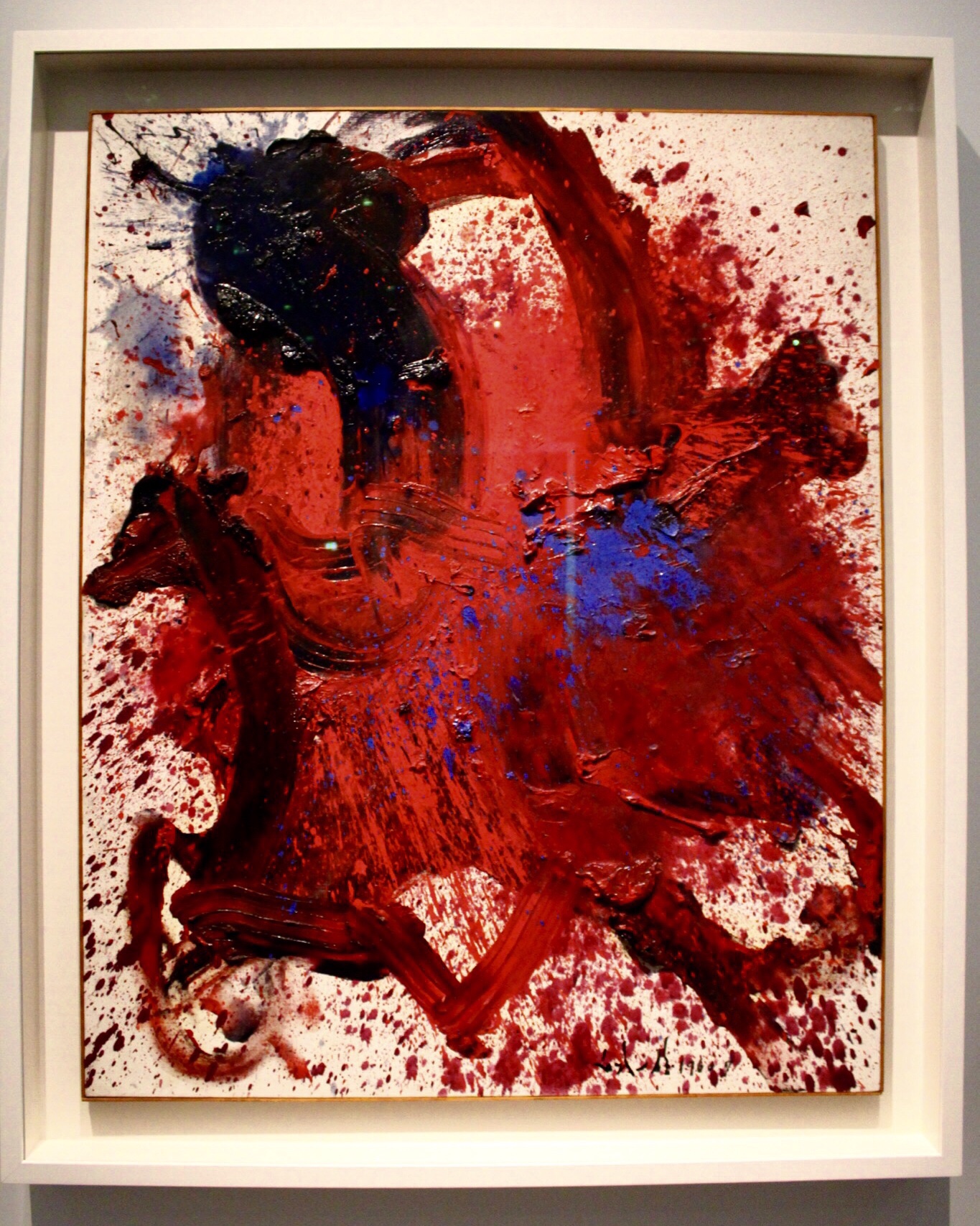 There is something intrinsically beautiful about raw emotion.  Ok, it can be hard to deal with if it is directed at you, but when it is used in an expression of artistic intent, it gives the viewer or reader an honest and open idea of what the artist was feeling at the time of creation.  Of course, emotions like art are open to interpretation, and may not always be received as the artist intended/person intended.

Shiraga died in 2008, leaving behind him a legacy of performance which left a lasting imprint through the paintings which he created during his performance.  This work was only internationally acknowledged after his death (as happens so often).

Shiraga was born in 1924, and in the 1940s he studied Nihonga at the Kyoto City University of Arts. In 1953 he founded the group “Zero Kai” with Akira Kanayama, Atsuko Tanaka and Saburo Murakami which merged with Gutai in 1955. Shiraga created and defined a technique of “mud paintings” by using his whole body to leave impressions in wet mud.

This pushed the way forward for the performance technique that he used for over tens years, from 1956 to 1966, which this particular piece is part from.  To create these pieces Shiraga would suspend himself from the ceiling on ropes, after piling paint on the canvas, then pushing the paint around with his feet, taking the energy of his body movements to create arcs of patterns.  To me this feels like Shiraga’s emotions demonstrated in a form of aerial dance which is so raw.

Shiraga’s art is a constant negotiation of space, both in its making and its reception. Photographs of the artist at work are integral in understanding his works and the Louvre could have done with some of these next to the picture to give a further feel for what the artist went through as it would add to the viewing experience. Captured while swinging on ropes hung from the ceiling and brushing the canvas with paint-dipped feet, it is in these images that his method truly comes to light. Looking at his paintings in light of this context lends a certain sensuality and tactility to the textures and forms, which become grounded in a profound sense of the artist’s character, creating unique and unrepeatable compositions.

This particular painting, is currently in the Louvre Abu Dhabi, and on first seeing it, before I read what the curator had written about it, I instantly felt that it was a Japanese warrior riding a horse in to battle.  The extremely limited palette leads to a feel of a violent battle, red paint splattered across the perceived horse and its riding, almost indicating a tumultuous struggle, despite there being no opponent.

The curators notes were as follows:-

“The movement captured in the work convey Shiraga’s spiritual energy.  He conceived the work as a struggle between himself, colour and matter.”

Ok, so they aren’t overly insightful, but I found it interesting that the artist conceived this work as a struggle, and it so strongly comes through to me as an image of battle.  Perhaps this is a show of what the subconscious can do.

I do have to stand back and admire this as I am clumsy, and should I ever feel the urge to hang myself from the ceiling and paint with my feet, firstly, I think it would look like a local farmer had brought his muck spreader around, and secondly I would probably fall from the ropes, just leaving a body print in the paint.  This is possibly why I am so taken with this piece.  The definition of multiple reds are still visible which gives an amazing depth of field to this piece, which to me appears as movement, almost frenzied.  The way in which the paint has been pushed around the canvas and then dried, creating a landscape of the colour, ridges and crevices, which add to the feeling of conflict.

Shiraga was quoted to have said “I want to paint as though rushing around a battlefield, exerting myself to collapse from exhaustion.” I think he absolutely achieved his goal.

Shiraga’s work has a very clear avant garde feel to it, pushing a movement of performance painting to new horizons at the time he created them.

In December 2014, 6 years after his death, Shiraga’s prime-period 1961 abstract, “Chijikusei Gotenrai,” was sold for 3.25 million euros, about $3.7 million, placing him in to a relevant part of international art history.  You can view more of Shiraga’s work here.

Want to see more of what inspires me or what I am working on?  Find me on Facebook/Instagram/Twitter by searching WidowCranky.