Did you know that a widow is not just a woman who has lost her husband?  It is also a printing term, where the odd word or line goes on to the next page, not sat within a paragraph, which is considered unsightly.  Personally I don’t think about it when I am reading a book… I don’t get upset by it’s presence, so it is odd that something so unobtrusive to the person reading the book, would be something that the printers would be fussy over.

It stands to reason, with that in mind, that artists would take something considered unsightly and transform it in to something beautiful.  Vhils is one of those artists.

Way back in 2015 I saw my first Vhils piece (although I didn’t realise it at the time) while I was in Lisbon and I can remember being so amazed by it.  His work is clever, and respectful as well as beautiful and well thought out.  Let me show you the piece I saw, before I go on to explain Vhils.

Ok, it was a dull day in Lisbon, but this still shone out.  The deteriorating wall of this little house, transformed into such a real face.  The detail and shading of the features so clear.  This is street art on another level.  Utilising the colouration of the building to enhance the piece.

Vhils aka Alexandre Farto was born in Portugal in 1987, and studied at the Byam Shaw School of Art in London.  Now he lives and works in London and Lisbon and shot to notoriety when one of his carved faces appeared next to a Banksy at the Cans Festival in London in 2008.

The face appears to look on as cave art is pressure washed from the walls, with a look of aged wisdom.

Vhils started as a general graffiti artist at the age of 10, getting in to it more seriously at the age of 13, using spray paint and following the tends of painting images and tagging others.  He started train bombing (not as destructive as it sounds), painting artwork on trains, which led to him travelling around more, and as he traveled, he began to think more about what he was doing as it was less about having fun with a bunch of kids and more about the aesthetics.

Now Vhils feels his artwork is about “questioning the reality that we live it”.  It creates new layers and strips away others to questions the urban existence.  Working on the destructive art theory, and utilising his time as a graffiti artist to work with the layers of our environment, stripping them away in a symbolic fashion to reveal faces of those who inhabit the environment as a remind of how our society was built.

So… that feels all very deep and meaningful, but it is a beautiful way of explaining why Vhils art is so special, acting as a way of remembering those who worked and built the communities we live in.

Vhils work is not all just faces of the past, as he introduces elements of technology or hot topics in to his work. 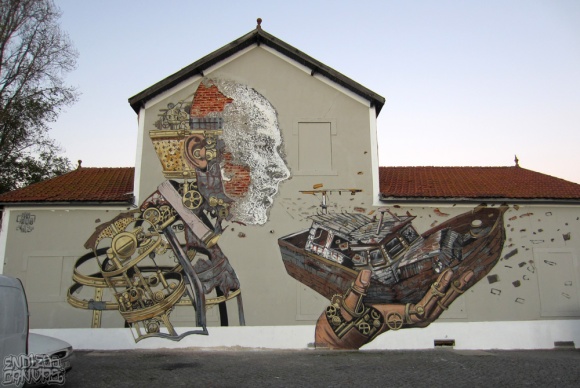 In this collaborative piece between Pixel Panco and Vhils elements of the industrial age have been introduced as well as the crushed boat at the hand of man, showing our inventiveness and our destructive nature.

As street art goes (and we all know I love street art) this is possibly one of the most advanced for me, not just relying on wall space to display talent, but also using the surroundings and history to create something meaningful to the place that it has been created.

You can now see Vhils work in 30 countries, and his work has been shown in solo and group exhibits as well as doing site specific art interventions.

As you can image, working in this way means that rather than paint cans, Vhils carries industrial tools and chisels to create his unique bas carving style which is now globally critically acclaimed.

You can see more of Vhils work here.

Want to see more of what inspires me or what I am working on?  You can find me on Facebook/Twitter/Instagram by searching WidowCranky.

Always wondered about a piece of art?  Why not ask me if I know about it?

One thought on “Vhils”