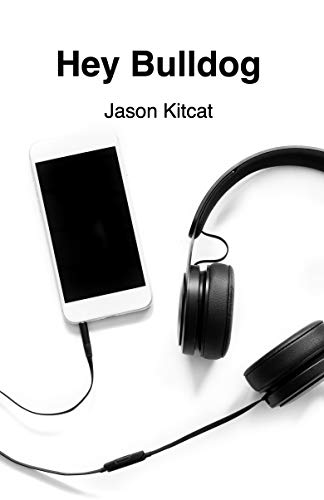 It is rare that I read a whole book that doesn’t capture my attention in the first few chapters, but sometimes something is so bad that I just have to see it through.  This book is one of those.  Anyone who knows me, will know I have a passion for appalling horror films, simply because they are so bad they end up funny, and I guess that the same could be said for this book.

I am going to say, I didn’t buy this book, but if you are in anyway intrigued, you can pick it up on Amazon for £7.95.

The back of the book almost makes it sound exciting:-

Are the messages real or just from colleagues keen to make fun of the loner?  As the narrator delves deeper into the source of the messages he finds himself pulled into learning more about his past than he could ever have imagined.

Hey Bulldog is the debut novel from Jason Kitcat, combining elements of social critique thrillers by Henning Mankell along with the more lyrical personal discovery of novels from greats such as Haruki Murakami.  This original new novel brings together geopolitics, technology, personal discovery, lust and lost love into an engaging new story.”

Now there is nothing wrong about having some ego about your own work, but as this is a self published book, I think comparing your own first novel to two very well known and great writers is misplaced.

A quick google search will provide you with a plethora of information about Jason Kitcat and his political background, including his past jobs in Councils, he also has his own website (which frankly is horrible to look at and navigate) but if you want to know more about the author you can investigate here.

As usual there will be spoilers in this, although if you have no intention in reading this book or maybe you do and just want to see what you are getting yourself in to, then do carry on reading.

The majority of this book is taken up with the unlikable main character moping about how useless his life is.

A web developer, who works for a small company developing corporate websites, who has no friends to speak of, and spends his time acting like a hobbit (eating a lot, and listening to music), wonders around questioning the meaning of his own life.  He has a sad and honestly cringy relationship with sex and paints the ultimate picture of how you would imaging a struggling web designer to be, without having him live in his mother’s basement.

The story takes a bit of a twist when he starts to find some spam emails, and odd messages within the website that he is working on.  The main character clearly isn’t that bright, as even I could work out in the early stages that someone from his past was trying to contact him (with an email of iz@hotmail.com being used I was pretty sure someone called Izzy was trying to contact him).

When he eventually figures this out, there is an unnecessary trip to Helsinki, which really adds nothing to the story as such, before he decides to use his stupidly high credit limit on his credit card (which he will need to worry about in 30 days – he tells you this quite a lot) to take 2 weeks leave and go hunting for Izabela.

There is a section in this book called “The Past”, which really only focuses around maybe a few weeks to a year of the narrator’s life (you never learn the main characters first name, so I can only assume the author was likening himself to the main character).  This centers around his unhealthy obsession with Izabela, a “passionate” (although more clumsy in reality) snog fest in a club, only to find she disappears back to her boyfriend, and then how the narrator isn’t man enough to talk to her about what happened, so more moping ensues.

They finally lose touch when she doesn’t return to complete her final year of university.

The hunt for Izabela is full of ridiculous actions and things that are far too convenient, and this is the authors awful attempt to bring in the political factors of what is happening across Eastern Europe and Russia into some dreary social commentary.

On a whim he jets out to California, without doing any prior research to try and remember Izabela’s surname or maybe even doing a quick check of any social media or websites to try and find her (really poor show for someone who is apparently up on tech), choosing to use a good old fashioned phone book to try and locate.  Luckily there are only 7 entries of the surname he “thinks” is hers and try number 5 finds her parents.

He gets there to be told he is missing, and was last known to be working in Warsaw for a freedom fighter company to help promote the freedom of expression.

Next he is on a flight to Warsaw, only to find the correct company straight off (because they don’t need to protect themselves and all have plaques on the wall telling you where they are), to meet a guy who after a little persuasion agrees to help him find Izabela… They then use a number of different cars and people to transport him to Kiev to end up in a safe house for a few days, finally being led to Izabela, who is being kept as a political prisoner by a government public prosecutor.   He is in a catch 22 as Izabela was captured holding large amounts of data with information about corrupt government officials, therefore he can’t let her go as it would damage his reputation, but he can’t prosecute either as it could cause civil unrest.  I have bored myself writing that…

This columinates in Izabela being held in the prosecutors house (pretty much in luxury really), she is then brought to the narrator, they talk and make love, they work it all out with the prosecutor and Izabela is saved, only for both to go their separate ways as they are very different people.

All the action takes place in about the last 30 pages of the book, and honestly it isn’t really that much action.

There are some very weak attempts at what I can only assume are analogies through reports of jewellery heists, but these appear to lead nowhere, they are just plonked into the book, with no real explanation or reason.  I can only think that they are an awful attempt at showing the control of the media.

There is no doubt that what is happening in the Ukraine and surrounding areas is terrible, and goes against everything we know and love… I mean if I didn’t have freedom of expression, I wouldn’t be free to write about how truly awful this book is without some kind of kick back, but this book doesn’t really delve into anything in any depth.

This book swings from making assumptions that the audience knows what the author is talking about (technical speak, political standing and actions) to patronising the reader in extraordinary fashion with sentences like “What is now known as the internet”… just in case you aren’t sure what the internet is or how it came about… not that this will answer that for you either.

The dialogue between characters is not natural, and doesn’t flow.  It feels contrived to get a political statement out, and the internal dialogue of the narrator reads like a teenagers diary.

The book is littered with grammatical errors, spelling mistakes and poorly constructed or half finished sentences, so if you are looking for something well constructed, maybe steer clear of this minefield.

If you think you would like a sad description of a 40 year old virgin who cooks things such as super noodles and popcorn and will tell you about them at great length, or explains his love life in prose which makes that lettuce at the back of your fridge which has wilted look exciting, the this is the book for you.