If you read enough or watch documentaries a lot, you will often hear them break down most things into the base mathematical equations, which can make life seem quite dry and potentially pointless when it just boils down to the fact that we are here because the equations lined up, if you are a believer in any religion, it does take the shine off of your chosen God to think he might have been a math nerd.

Did you know that Da Vinci has only 15 paintings which are attributed solely to him.  This in itself seems crazy when he is the artist who has painted possibly some of the most famous works known to man.  The most obvious being the Mona Lisa, which is now so famous that it can neither be bought or sold due to the fact that it is considered priceless.  It has it’s own room in the Louvre in Paris and is one of the most viewed artworks in the world.

With this in mind it seems ludicrous to think that he only created 15 paintings.  Which actually he probably didn’t.  There are essentially many, many more, but there are a few factors which mean that his work either were collaborations and were put out under other artists names, or because he loved to experiment his works deteriorated and were lost to the sands of time.  The Mona Lisa is painted on a plank of poplar wood, which has warped and extensive work has been done on it just to keep the work to a standard that it can still be viewed.  The Last Supper is known to be horribly eroded due to the type of surface that it was painted on, the paints used and the lack of finishing.

Da Vinci was also a doodler.  A lot of his work that we know of, were in manuscripts, where he studied the make up of life, from muscle tone and movement, to mechanical contraptions, there is no doubt that Da Vinci was a genius, but his genius links into the base principles that everything around us ultimately links into a coincidence of mathematical equations that just happened to line up correctly.

I would imagine that everyone has at least seen the Vitruvian Man, even if you weren’t sure what it was all about, it has been used from decorating the side of buildings to being included in the opening of TV shows.  It is one of Da Vinci’s iconic studies.  Lots of other artists tried to depict the theory, but none are as well known as Da Vinci’s.

Essentially what you see in the Vitruvian Man is a man within a circle and a square.  His arms and legs are shown in different angles, which show defining points within the shapes that the man is encapsulated in.

All very nice, I hear you mutter, but why?

This study was based on the theory created by Marcus Vitruvius Pollio (though had been embellished from an earlier theory from Pythagorean science of numbers), although he was more commonly known as Vitruvius.  He was a Roman architect and author, who wrote “De Architectura” where he defines the perfect proportions for architecture and the human body as he felt the two were linked.

The theory, known as “The Proportions of Man” is:-

“Just so the parts of Temples should correspond with each other, and with the whole. The navel is naturally placed in the center of the human body, and, if in a man lying with his face upward, and his hands and feet extended, from his navel as the center, a circle be described, it will touch his fingers and toes. It is not alone by a circle, that the human body is thus circumscribed, as may be seen by placing it within a square. For measuring from the feet to the crown of the head, and then across the arms fully extended, we find the latter measure equal to the former; so that lines at right angles to each other, enclosing the figure, will form a square…”

This theory was studied by many artists in an effort to find a way in which they could truly represent the symmetry of perfect proportions, in the idea than man is the blue print for this and by extension the universe as a whole has the same symmetry.

Cesare Cesarino’s illustration which was used in a publication of “Da Architetura” in 1521 focused more on the prone body and less on the shapes which should encompass it to try and bring the theory to life, but in my opinion, the head in this one looks too small, and the legs and torso out of proportion to the arms, but it was a valiant effort in trying to help visual what Vitruvius was saying. 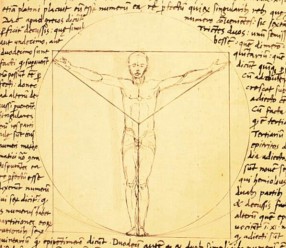 In this version, created by Giacomo Andrea, a friend of Da Vinci and expert on Vitruvius, we can see the start of what we now think of as the Vitruvian Man, indicating the initial workings could have been done in collaboration.  The idea of the of the arms being raised rather than straight out has formed in this image, and the creation of triangles within the square, but the proportions still are not quite correct, especially as Vitruvius’s theory was to bring symmetry and balance in architecture through the perfect proportions he perceived in man.  For me the stance in this one doesn’t appear to be natural, drawing the eye to the awkward positioning of the legs.

This leads me on to Da Vinci’s rendition, naturally hailed as the definitive of this theory, down to his in depth study of the text against his own study of the human body.  Da Vinci extends the work to different positions of the legs and arms and determined proportions for every part of the body.  He also worked on the principle that the center of the square cannot have the same center as the circle, therefore one is at the navel and one is at the groin.

You could be wondering why these proportions are so important, but how often have you seen a piece of art and thought that there was something, just not quite right with it?  Either a hand is too big, or an eye is too small, and your eye is drawn to the imperfection, because is it not symmetrical and it is not within the proportions that we see in every day life.  Da Vinci’s work put a logical theory to the proportions to be used and demonstrated them in exact precision, and this is why his Vitruvian Man is the one we all know about.  He understood to create life like beauty that the mathematics behind the artwork had to be correct, and this is his key to having the most known piece of art ever.

These proportions and equations link everything we see together, from art to science to nature, so perhaps the meaning of life really is just a number.