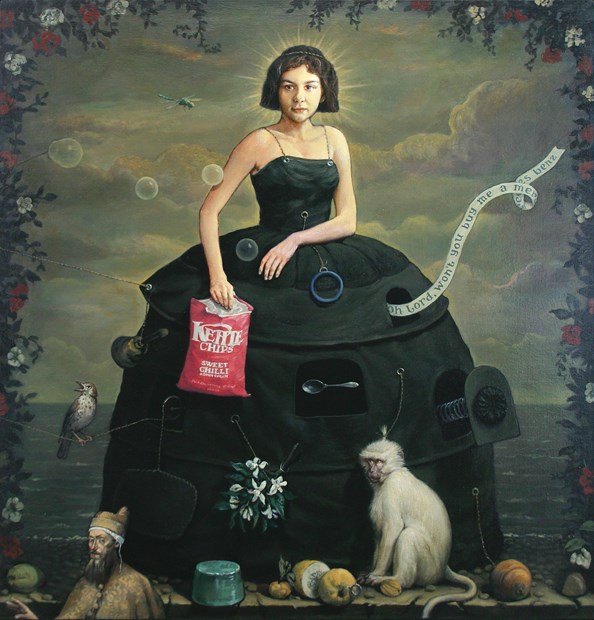 October, was frankly a horrible month.  Everyone gets them, you know those months where just everything gets a bit too much.  You have commitments that you can’t let go of, but equally you just want to bury your head in the sand, everything comes to a head and it just leaves you feeling… drained and unappreciated.  I have no doubt that every person reading this will understand where I am coming from on this one… you have had to take your pet monkey to the vet, buy the kids their favourite halloween outfit, balance your finances for the up and coming holiday season, do something earlier than planned which then eats into your budget, manage a billion and one things in your job and then still come home and pretend to be human.  I am here to tell you that you are not alone, we all face those pressures and is probably symptomatic of the modern life.

This is why I chose this beautiful painting by Alan Macdonald for this article.  Not because I wanted to have a moan about my own personal happiness that October is over, but because this feels like it embodies the multitude of things a person goes through on a daily basis.

Macdonald was born in 1962 in Malawi, Central Africa.  In 1984 he graduated with a BA in fine art from The Duncan of Jordanstone College in Dundee, Scotland.  He then did a post diploma in Cyprus, popped back to Dundee for 3 years for a bit more studying, lived in London for 15 years before going back to Scotland to settle in Carnoustie, where he has been since 2003.

Macdonald’s work is a beautiful blend of old masters, common modern themes and a dark and intense humour.  His paintings are reminiscent of Dutch art with the dark backgrounds and attention to detail, along with the odd combinations of items which sound the central figures.

In “Whims of Desire” we see a dark haired women in a domed tiered dress, which actually looks like some kind of machinery.  Her dress is tethered to something off to the left of the canvas, and a bird sits on the wire, which is also linked to a bell and a pulley system.  There are a number of openings in the skirts of her dress which reveal a punch spring, a ball and chain, the lyrics from a Janis Joplin song, a spoon and a bouquet of white flowers.

At the base of her dress a white monkey, which is also attached to the dress, looks at the open bag of sweet chilli kettle crisps that she is holding in her hand as whimsical bubbles float by her.  There is an enigmatic look on her face as a heavenly light seems to radiate from behind her head.  There is fruit scattered at her feet, and in the left hand corner a man of a religious variety appears to be passing a blessing.

The woman is gazing out impassively at the audience, a “Mona Lisa” smile coming to her lips, as a dragonfly heads towards her.

The painting is mesmerising, with an awful lot to unpack, which is one of the reasons I find Macdonald’s work so intriguing.

So… where do I start?  Let’s go with the bird on the wire, as strangely it was the thing that drew my eye first.  The wire, seemingly ties the women to an unknown entity, but it also wraps and intwines itself to all the other items in her dress, giving the feeling that if she moves from her position, everything in her dress will pull tight, the bell will ring and we will shortly find out what she is bound to.  The term “bird on a wire” comes from a Leonard Cohen song, which he was noted as explaining it was meant to be about an unattainable woman who he could only touch with his mind, but others felt it was a controlling phrase use to ensnare birds/women… in this instance, both perceived meanings work.

The items in her dress, to me are her ties to everyday life – the ball and chain indicating she is married, the monkey like a child pulling on its mother’s apron strings, the spoon a need to feed the family, the spring punch – a metaphorical icon of being someones punch bag… even if it is only verbally for those around her when they are having a bad day.  Ironically, white monkeys symbolise wisdom, but in this case, I don’t feel that it is wisdom that is being tied to her dress.

All of these things are delivered while looking picture perfect in this cumbersome dress.  She is immaculate, and potentially the heavenly light from behind her head, is leading to some feelings of martyrdom on the woman’s part as she puts all others before herself.

And here is where the comedy starts for me…

The lyrics “Oh Lord won’t you buy me a Mercedes Benz”, is the start of the woman’s whimsical desire, her want for appreciation.  The kettle chips being her treat in life and is keeping them out of the reach of the monkey.  The bubbles indicate some dreamlike state, and dragonflies generally represent some level of self awareness and need for change.  She is literally finding her little whims of desire.  The flowers that edge the canvas are much more vibrant than the ones that hand from her dress, almost setting her in some dream like state, away from her everyday life, and she is doing all this behind the back of her religious icon, as if a bit of “me time” was a sin.

Now… When I was researching this painting, I read a passage which confused me… It mentioned burning building in the background of the work… but I could not find this image… rather what I found everywhere (including the artists own website) was only this version with the calm sea and the sea wall behind her.  This gives a very whimsical feel to this piece, which confused me further when the passage talked about psychological and sexual tension.

The blackened background and missing items really changes the feel of this piece.  The darker image appears to have been created in 2011, where are the one I have written about was painted in 2015.  The earlier version definitely feels it leans more towards desires and less towards the whimsical.

The composition, in both, is a powerful pyramid structure, aligned with light, centring on her pale skin, white ribbon of script and rope tether. It is almost a work or architecture just demonstrating the skill and style of this amazing artist.

The colour palette I find really intriguing, as the 2015 image has a very muted background contrasting to the very vibrate crisp packet, which is comical and confusing for the overall style of this oil painting, which just adds to my enjoyment of the piece.

Worlds apart
.
.
.
In need of the calm of the ocean today
Unbreakable bonds
Unadulterated Margate
.
Currently feeling so blessed that so many artists have been to receptive to being interviewed. Check out my interview with @rumblart on widowcranky.com now
Seasons pass but the memory remains