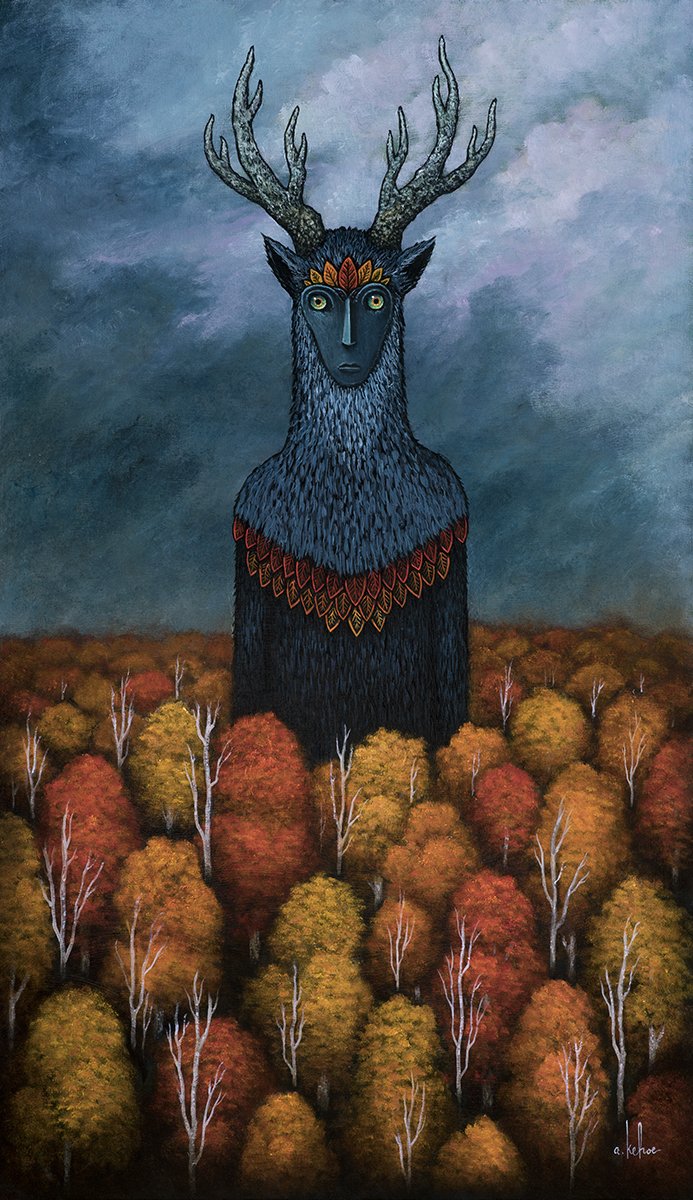 I am taking a very slight detour from fairy tale this week to look at an artist who seems to base his art in the world of folklore, myth and stories instead. As a child I was deeply enthralled by stories, I had a vivid imagination and would spend hours daydreaming about mythical creatures; this probably is rather unsurprising and has made it so much easier for me in later years to link into the world of art.

Kehoe is an intriguing artist that presents an ethereal and wondrous world based in nature. His style seems to hark back to childhood books but at an elevated level, which makes his work feel comforting and endearing.

If you look on Kehoe’s website under the “About” section, you can find entertaining and far fetched tales about how he was brought up by iguanas and left his home island by wandering on to a cruise ship, fought a man who was in cruise ship prison to gain alpha authority. He also lived in a dark forest in Romania where he lived on the blood of children and goats as well as the odd potato and glass of red wine. Eventually the villages realised that it was not a god causing all the problems, but a blood thirsty creature and they burnt the forest and his collection of kitten whiskers, dried flowers and beetles. He then roamed the lands during WW1 and tasted bourbon for the first time, which tamed the beast and he moved to Pittsburg. His “About” section smacks of an artist who doesn’t take himself too seriously despite his stories being dark (and perhaps some elements of truth woven into the fabric of their creation). I would recommend giving it a read here.

Kehoe was actually born in 1978, in Pittsburg where he lives today, but he did attend the Parson School of Design in New York. Kehoe spent a short time working as a commercial illustrator before deciding to concentrate on his own personal work. Since then he has been exhibited internationally with exhibitions such as “Prismatic” which had themes of freedom and fear of the unknown.

In case you couldn’t tell, Kehoe was brought up on comic books and cartoons, which is hugely evident in his work, as they depict dreamlike landscapes with monsters and creatures going about their business.

I guess I selected the “Harbinger of Change” as it is one that struck the most synergy with me. I am a huge Studio Ghibli fan, and this resonates Shimshigami from “Princess Monoke”. If you have no idea what I am talking about, this is Shimshigami:-

It is hard to get away from the fact that the “Harbinger of Change” is remarkably similar to the Forest God from this anime film created in 1997. This definitely isn’t by chance (as I am sure that you didn’t think I would just leave this as comparing two similar being). In “Princess Mononoke”, the Shimshigami is a part deer, part bird, part baboon creature by day and a huge spirit by night. It dictates life and death and it brings about the change in seasons.

Now…Japanese gods, there are thousands, and way too many for me to go through in just one article, but it is safe to say that there are many folk stories from all over the world which relate to spirits that rule the forest and are adorned with horns. Across cultures we see creatures such as the Wendigo, Weychuge, Leshi and Sylvan which all have links to this style of creature…even Andy’s own description of himself have some of the trait of a forest God.

For this particular article though I am going to concentrate on the Leshi, simply because Kehoe’s stories talk about Romania and this is from a Slavic folklore.

The Leshi has a varied description (as most mythical creatures do), but what remains the same is the fact that he can shape shift to be taller than trees or as small as a blade of grass. Sometimes he is depicted as having horns and a beard decorated with flowers, pine cones and feathers; other times he is missing an ear. The Leshi is a protector of the forest and will make pacts with local farmers to protect their crops and cattle, in exchange for them sharing holy communion with them when they return from church. He has a pale complexion and bright green eyes which glow in the dark.

Other stories tell of how the Leshi likes to steal signposts and lure travellers deep into the forest, then calling out in a human voice so that they will enter his cave so that he can tickle them to death.

Leshi is ultimately the protector of the forest, bringing about the changes in the seasons and controlling the life cycle to ensure that trees and wildlife remain in their natural order.

Kehoe’s painting shows a being, larger than the trees, overseeing the change in the autumnal scene. He is pale and decorated with feathers. He has deep and mournful eyes which seem to be bidding goodbye to the summer months. The sky behind him is tormented and stormy, echoing the change in the air.

Despite the dark skies of the painting and the blue figure, the pallet is bright – the trees in a beautiful display of autumn reds and yellows, which could be a contrast to the harshness in the beauty of nature. It’s life cycle which sees living things go dormant and revive year on year.

Kehoe’s work is full of mysticism, and wonder as well as a background of threat, much like a child’s story. There is always something that challenges the story to incite good behaviour and respect of the elements around them.

Kehoe’s paintings are a combination of acrylic/oil and resin on wood panels, which lends itself to the natural world which he is immersing his world in.

Exploring philosophical, psychological and spiritual concepts & ideas with a view to illuminating the mind.