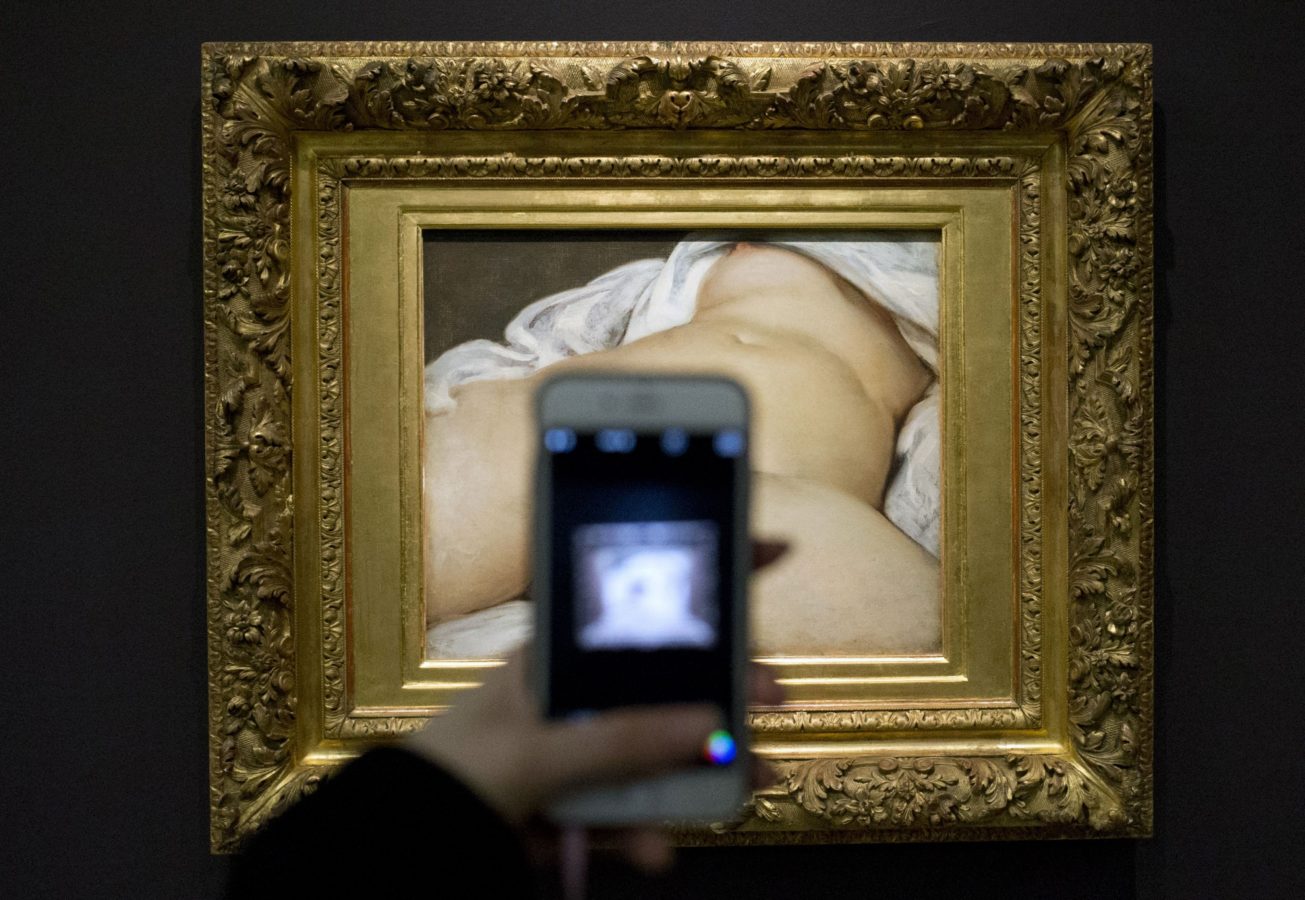 This is originally an article I wrote for Parkstone international, but they decided to change it, so that it bore very little resemblance of the article I wrote. Therefore, as I write for them out of the goodness of my heart, I decided to post the full article here.

This subject is a fine line one in my opinion.  There are plenty of paintings from through the ages that show naked women lounging around displaying their femininity, equally there is an abundance of statues which show men standing around, wrestling or hunting naked.  These are usually considered classical art, because someone has taken the time to paint or sculpt them in fine detail, where as now, if it was a photo of the same image, it would probably be considered lewd or pornographic.

I can remember, way back in the 90’s, listening to the comedian Bill Hicks on his “Relentless” tour, and there is a piece of that stand up which always stuck with me, possibly because it was observational humour which hit the nail on the head:-

Hicks goes on to explain how sex sells, and by the definition of the Supreme Court there is a lot that could be considered pornography by these standards, and I think that this is correct.  Who is to judge what one person finds artistic and another finds erotic?  This statement also runs into deep issues with those who are attracted to inanimate objects (objectophilia), I would imagine we all have heard about the woman who married the Eiffel Tower, which in itself is a great feat of engineering and has artistic merit, but because one person finds it sexual appealing, does it now make it pornographic?

There are obviously things that are simply created to be for the sole use of sexual enjoyment, but over the ages, artists have run into upsetting their audiences time and again with images that they have lovingly created, yet the viewers see it as crude and indecent in the cold light of day.

For the feature picture of this article, I have used Gustave Courbet’s  “The Origin of the World”.  This painting was never really created for a public display, as it was commissioned for a private buyer, thought to be Khalil-Bey who was a Turkish Egyptian socialite in Paris in the 1860s.  He had an extensive collection of art celebrating the female body, but he lost it all in gambling debts.  What happen to the painting between then and 1995 is very unclear, but it was put up for display in the Musée d’Orsay and it was owned by the psychoanalyst Jacques Lacan.

“The Origin of the World” is the epitome of an art paradox as it is one of the most famous paintings that was rarely seen, and you can see why this wasn’t displayed publicly during the 1800s.  This painting has escaped being called pornographic due to the refined amber pallet, but for me there are two ways to look at this, the first being it is a celebration where life comes from, harking to mother earth and how the female genitalia holds the key to the start of all human life; but the other could see this as amplifying a woman to just being a sexual object, her face unseen, concentrating on simply the parts which are important.

The painting has been created with anatomical correctness, and while a frank rendition, there is nothing crude about it.  It was not uncommon for Courbet to paint nudes, but this painting was a ground breaker considering the focus of it.  Personally, I think this painting is beautiful in its openness, but it still causes issues today – in 1994 French Police seized a book from all sellers which had a reproduction of “The Origin of the World” as its book cover, and social media platforms such as Facebook have censored posts of this picture, disabling accounts that post it.  This type of behaviour gives the impression that there is something wrong or unnatural with this type of artwork, which can lead to negative responses, and it is because the line between artistic and pornographic is so blurred… we could throw in the portrayed media image of females if we really wanted to get into a deep thought strain here, as while pubic hair was not a fashion trend to be considered in the 1800s, today women are plucked and waxed within an inch of their life, all because of how the media portrays a good positive image.

On the 29th May 2014, Deborah De Robertis, decided to tribute this painting, by entering the museum it is housed in, and sit in front of it, displaying her own vagina in an act of performance art.  She was later taken away by the police for sexual exhibitionism.  So, what changed from the picture of just the torso, to having a live model display her own genitals?  De Robertis displayed herself in quite graphic detail.  In the piece she calls “Mirror of Origin” she has said that Courbet didn’t show the “hole, that is to say, the eye. I am not showing my vagina, but I am revealing what we do not see in the painting, the eye of the vagina, the black hole, this concealed eye, this chasm, which, beyond the flesh, refers to infinity, to the origin of the origin.”  In my opinion this elevated this from something that was matter of fact, to having an insight into a woman’s body that is only for those she chooses to share it with.  This is not something I would want to see publicly displayed, but art is subjective, and De Robertis felt that there was something missing from Courbet’s rendition, and wanted her chance to put this right.

There are many other nudes I could write about to fulfil this topic, but I am only really going to concentrate on one other, as I think it is particularly pertinent to this subject.  “Olympia” by Édouard Manet.

Brazen, isn’t she?  Staring out at you from the canvas, accepting the fact that she is naked and happy with the fact that someone is looking at her, as well as having her maid present, while this voyeuristic act happens.

While this painting was only completed three years before “The Origin of the World”, it shocked audiences, not because she was naked, but because it was clearly a nude portrait of a prostitute.  The model for “Olympia” was Victorine Meurent (incidentally she was in real life an artist in her own right).  The presumption of being prostitute came from the symbols which had been added in – the orchid in her hair, the bracelet and the oriental shawl which she is lounging on.  These all indicated sensuality and wealth.  Her gaze indicating that she is comfortable with being viewed naked, her hand which comfortably covers her genitals, indicating sexual independence and a restricted access, only for paying customers.  The slipper, hanging from her foot, gives a voluptuous atmosphere.

The painting has its basis from Titian’s “Venus”, who we know is the Goddess of love and sexuality, the differences with Manet’s painting to Titian is the gaze of the subject.

While Venus really has the same pose, the others in the room are not present in focus, and Venus’s gaze is less direct, almost demur in her composure, yet the traits of sexual independence and luxury are still present.

There was also the case where “Olympia” was thought to be too thin, making the painting appear more indecent as curvaceousness was seen as attractive, and slim figures seen as overtly sexual (oh how times have changed).

When “Olympia” was first displayed in Paris Salon in 1885, it caused uproar, being labelled as immoral and depraved.  It is worth noting here that the maid in this picture was modelled by Laure and it has been felt that over the years, she has been overlooked as she is simply there to highlight the confrontational look of “Olympia”.  The painting was completed fifteen years after the abolition of racial slavery, yet racism was still rife, and Olympia’s gaze is almost disdainful at the flowers being presented.  It is a stark contrast in feminine figures within the same painting.

There are lots of things I could write about “Olympia” but for the purpose of this article, she is here to serve the purpose of how a facial expression can change the viewers opinion from beautiful woman lounging demurely on a sofa, to confrontational feelings of sexual independence.  This simple change intimidated the first viewers, pushing this from something that was felt to have artistic merit, to a piece that was pushing its audiences’ boundaries.

For anyone, who may have seen the Newspaper “The Sun” – they used to have a page 3 girl.  This was a woman who posed with bare breasts, staring at the camera.  This was never considered art but edged on the side of softcore pornography.  She was usually smiling and enticing for the readers and had some vacuous quote about how the woman liked long walks on the beach.  This really isn’t that far from what Manet created in Olympia, a female who is sexually open and happy for men and women to look at her.

There will never be a right answer to this question of when does art become pornography, and it really is dependent on what the viewers boundary is.  It is far easier to upset someone who is sexually repressed with images of nudes than it is for someone who is perhaps more exploratory, and this is the key reason why these types of paintings where completed on commission rather than part of the artists natural repertoire.  Artists will always run the risk of being the centre of a controversy through unintentional offence, but life would be boring without differing opinions.

5 thoughts on “When does art become Pornography?”