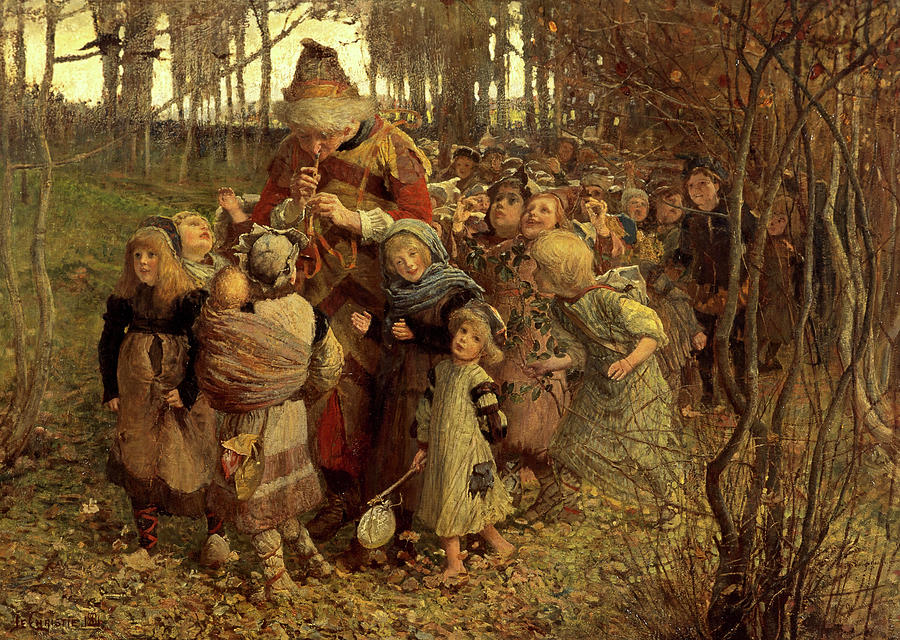 In the weird story game, Europe has to be up there in the top 5, which is probably what made it so easy for the Brothers Grimm to collect so many creepy and totally dark tales of people being either completely manic or mistreated.

This is not to say that other cultures don’t have such dark and ultimately terrifying stories (Japan is waaaaay up there), but in Europe they are in such abundance, and many of them based on some semblance of truth. The Pied Piper, while documented in the 1800s by the Grimms, accounts of this story go back to as early as 1284. Before I get into the history of the story – let me remind you of the tale.

The little town of Hamelin was in trouble. It had a plague of rats which were uncontrollable. From the rats, plague spread to the townspeople, many were sick and dying. The town leaders had no ideas on what to do and panic was starting to spread.

One day a piper arrived at the town, and recognised the issues that the town were encountering. The piper was a tall slender man, dressed in a coat made of many brightly coloured fabrics. Finding the mayor of the town, the piper told him that he could rid the town of rats for a price. The mayor, dubious of the piper, strikes a deal that if he removes the rats, they will pay him what he has asked for.

The piper proceeds to walk through the streets of Hamelin, playing an upbeat melody on his pipe. As he walks through the streets, the rats pile out from under the houses in droves. Soon, there is a heaving mass of rats clambering over each other to keep up with the piper. Leading the rats out of the town the piper disappeared into the distance.

A few days later, the piper returned to the town. There was not one rat in sight. The townspeople were joyous, and going about their daily lives, almost as if the rats had never been. Approaching the mayor, the piper requests his payment, but the mayor laughs at the piper and exclaims that they will not be paying him for his services.

Obviously the piper was none too pleased with this and vowed revenge on the town of Hamelin.

Later that year, the piper returned to Hamelin. This time on a Sunday morning, while the adults of the town were at church. Walking through the streets, he played a melancholy tune, and soon the children started to follow him. As he did with the rats, the piper led the children out of town and into a cave down by the sea.

When the adults returned from their prayers, panic once again hit the town. Searching high and low for their children, they could only find three. One who was deaf, therefore couldn’t hear the tune that the piper played, and the last child was lame, so couldn’t keep up with the others. The remaining children explained what happened.

A search for the children was sent out, but they were never found.

I realise it sounds fairly ludicrous now that rats and children would follow a piper out of a village, but the church of Hamelin had a stain glass window depicting the piper leading the children out of the town. Unfortunately this church was destroyed in 1660. There were however some written accounts, though the details were sparse to say the least. The oldest written account is from around 1450 and reads:-

“In the year of 1284, on the day of Saints John and Paul on June 26, by a piper, clothed in many kinds of colours, 130 children born in Hamelin were seduced, and lost at the place of execution near the Koppen“

It would appear that the rats were added at a later stage to this story, probably as an explanation to why the piper wanted the children, as it is a much harder story if it is solely about kidnapping.

There are many theories about why someone would lead the children out of the town in this way. Some look to the “Children’s Crusades” which makes the most sense to me. This is a semi factual story from around 1212, about children being sent to regain the Holy lands. This ended with the children being sold into slavery. As it stands it wasn’t actually all children, but there is some evidence of a couple of crusades of this nature taking place around this time.

Another theory was that the children were simply sent away due to the extreme poverty of the town.

There is a metaphorical reasoning that the piper is actually just an embodiment of death, and 130 children were lost to the Black Death, but this theory holds little weight as the Black Death wasn’t present until the mid 1300s and this event is evidenced much earlier.

There is one last, very dark explanation which is the children were simply abducted, and perhaps it was particularly easy pickings in Hamelin at this time.

Sadly we will never know the actual truth around this event, and it has been heavily embellished now to a story which is acceptable for children to hear, rather than the dark tale of children being led off as a payment for a reneged deal.

It is worth noting that in the town of Hamelin now, there is a street called Bungelosenstrasse, which means no drum street. To this day, no one is allowed to play music or dance there, as this was supposedly the last street the children were seen in.

The painting I chose to go with this article is by James Elder Christie, and was painted in 1881. I selected this one as, for me, it really highlighted the creepy undertone of what is happening. It could be that the piper is reminiscent of Father Christmas, maybe it is that the children all look really happy to be following this man they don’t know. Perhaps it is the muted pallet of the painting, and the evidence that this forest is dying back as it is autumn (the leaves on the ground and the bare trees) in contrast to what the children’s fate is, but while on first glance it is a picture of enjoyment, we all know these children will never return.