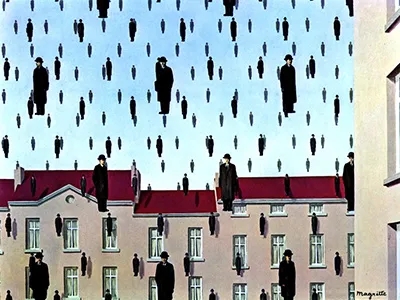 Do you remember the song “It’s Raining Men”, by the Weather Girls? They always made it sound like there was an abundance of Adonis like men falling from the sky, ready for the taking, which always conjured images of women being knocked out by a falling half naked man, for me…

Or maybe you remember the talk of “The Rapture” where beings on Earth would be lifted from their every day activity during the end of days, their clothes would just fall off of them as they were lifted to the heavens… just leaving the heathens to wonder the Earth during the days of the last great battle of heaven and hell. This again sounds pretty messy to me… If anyone has seen the terrible Nic Cage film called “Left Behind”, it shows what would theoretically happen if some people were raptured and others left behind… needless to say there are planes left without pilots, cars without drivers etc. and those left on Earth running around frantically trying to figure out what just happened.

When you look at “Golconda” you could be forgiven for thinking of both of these situations as the painting shows hundreds of men either falling or rising.

I have written about Magritte a few times now, so if you would like to know about his life, you can find more information on it in this article. Needless to say, his art falls into the surrealism category, and while floating (or falling) men feels like and extreme case of surrealism, I often look at this painting and feel it is almost too normal.

When I say normal…. I mean that it is very obviously a typical suburban street, all the men are dressing in exactly the same way, bowler hat and a trench coat and while the scenario is strange, the look and feel is of the mundane. This was painted in 1953, when the devastation of two world wars was starting to settle, and life had started to become more luxurious and perhaps bringing about the era of “keeping up with the Joneses”.

The painting shows men dressed in the standard office wear for the 1950’s of bowler hats and trench coats, some carrying briefcases, others carrying umbrellas uniformly suspended in the air. Behind them, a regular looking street with red roofed houses, and what I perceive as being an early morning sky. You can see in the windows of the houses all the curtains are closed, seemingly these men are up with the dawn to go to work, before the rest of the world wakes up.

Let’s start by talking about the name of the painting, “Golconda”, it’s a fairly odd name, which is also the name of an ancient Indian city which was known for its production of especially large diamonds. Golconda as since been used to describe a source of wealth, happiness or a great advantage.

With this in mind, let’s now look at the men. There are a lot of theories around them, ranging from the way they are travelling (or not) to the pattern that they have been painted in. The closest theory I think is stemmed from the fact that Magritte spent some of his time working in a wall paper factory, painting flowers repetitively. It could be this influence which drove him to the exacting pattern that the men are in ( I will take it from others who have studied mathematics far more than me, but apparently they are in a parallel rhombus pattern). The men are all equally spaced apart, as well as their shadows, each are meticulously measured from each other and the surrounding buildings. The depth of field hides the men’s identity the further way they get.

The bowler hat and suit was a particularly iconic look for Magritte as he spent a lot of his own time dressed in this fashion.

If we pull these theories together, we could logically say that the picture is a comment on the suburban lifestyle that Magritte experienced, with individualism being lost to the machine of capitalism in the search of wealth and happiness. Creativity seems devoid in the monotony of the pattern of men and as they strive to be part of the patriarchal system.

But…this is a surrealist painting and it almost plays out like a Freudian dream, where Magritte takes an ordinary scenario and pushes it to an extreme, to allow his viewers to explore the depths of meaning to mundane things and defamiliarises the familiar to exhibit a different view point.

We could also listen to the artist himself, who admits that there is no correlation between the titles of his painting and the image itself.  Magritte once said that his paintings mean nothing because mystery means nothing.

Regardless as to whether you believe Magritte claim that his paintings meant nothing, or if you find your own meaning within his surrealist world, his work fascinates audience the world over.