Everyone has their bad days, the 2nd of July 1816 was a particularly bad day for Viscount Hugues Duroy de Chaumereys. Little did he know that when he was appointed captain of the frigate Méduse would he be sending so many people to their deaths.

Before I writing about the painting today, I’m going to look at the history, as this is an insight in to the misery and lost lives from this fated point in time.

Duroy de Chaumereys, despite not having sailed for nearly 20 years, was appointed to the Méduse, the ship which was leading a convoy of 3 other ships, was carrying around 400 people, which included French governor Julien-Désiré Schmaltz, and his family. They were bound for Senegalese, to accept the British return of Senegal under the French terms of acceptance of the Peace of Paris. De Chaumereys appointment was a routine naval appointment, yet after the events outraged France blamed King Louis XVIII for the error of judgment.

In an effort to make good time, the Méduse overtook the other ships, but due to poor navigation it drifted 100 miles off course, and ran aground on a sand bank off the coast of west Africa, lack of experience and poor judgement was to blame for this collision. Attempts to free the ship from the sand bank were useless so on the 5th of July 1816, the passengers and crew decided to make the 60 mile trip from the grounded boat to the shore using the lifeboats. Sadly there were only 6 life boats which could hold the capacity of 250 people. De Chaumereys made the decision to get the ships carpenter to make a raft which would carry the other 150 people which could be pulled along by the life boats. The raft was hastily assembled, and anyone who was not deemed as important as the governor, other dignitaries we assigned to the raft. 17 crew members decided to stay with the grounded ship. The raft partially submerged as soon as the people were loaded and little sustenance was provided, a bag of ships biscuits (which were consumed within the first day of sailing), two cases of fresh water, which were lost overboard during fighting and 6 casks of wine. It was evident that the raft was slowing the lifeboats down and after just a few miles, the decision was taken to set the raft a float on its own. This lead to 13 days adrift for the people on the raft, of the 147 people that were aboard the raft only 15 survived. The people on the raft were taken to the brink of human experience, going through madness, despair, cannibalism, starvation and all the emotions that go with being basically left to die.

On the 17th of July, the 15 survivors were rescued by the Argus, this was a chance salvation as no rescue or search efforts were made by the French.

This was a huge source of embarrassment for the French monarchy who had only recently been restored to power.

Géricault took great personal interest in this event, and created this rendition of the point of salvation as an uncommissioned piece. His interest ran so deep for this tragic affair, that he went to great lengths to understand what happened. He interviewed survivors, studied the sick and dying in hospital to get the colour palate correct and built a detailed scale model of the raft. The painting was highly controversial and was met with equal amounts of praise and condemnation at its first appearance, and was deemed anti-monarchal due to the kings (lack) of involvement in the whole affair.

The painting is 16 feet high and 23 and a half feet wide, and is seen as the seminal piece of the romantic movement in French painting.

So what did Géricault portray? As the viewer you see the hastily made raft, a small number of its original passengers left in the crumbling wreck. The front corner of the raft is dipping in to the sea to draw the viewers views up to the tragic yet hopeful people aboard. This draws the eye to the physcial actions which is being portrayed on the canvas.

In the forefront a father holds on to the naked body of his dead son, despair and condemnation shown on his face. Another is literally tearing his hair out through utter frustration. Dead bodies lie in the gaps of the raft, their limbs being dragged in to the depths of the water.

On the right hand side, a few of the men with strength left in them, wave a rag at a ship that they can see in the distance, while on a the left a threatening wave looks to be ready to break and smash the remains of the raft. The clouds behind the wave look ominous and foreboding, yet sun light pierces through them, reflecting the small glimmer of hope that the tiny rescue ship on the right hand side offers.

The construction of the painting is particularly interesting as Géricault uses a 2 pyramids within the picture to highlight the dead and dying against the living and draw the eye line to the almost hidden rescue ship. 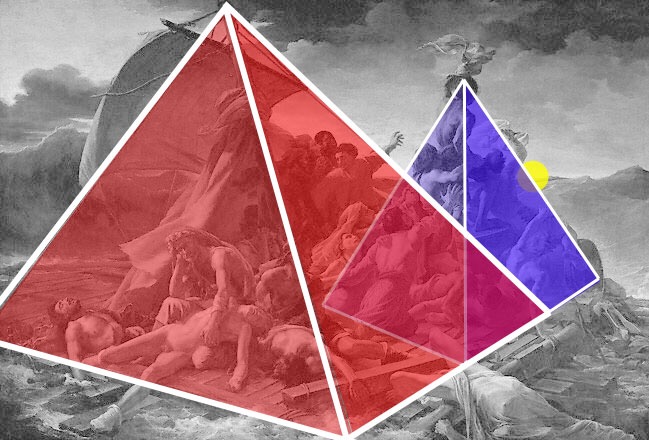 Shown in the diagram above, the red pyramid shows the devastation of the time on the raft, the death and loss, the madness and depravity, the blue pyramid shows the hope and determination of the remaining, there is a heavy overlay between the red and the blue, where those on the brink of death or consideration of suicide make a turning point at the hearing of the news of a ship on the horizon. The yellow dot indicates where the ship is in the picture.

The dark somber colours used within this painting are not all deliberate, Géricault used bitumen to add lustre to his work, but as bitumen dries it deteriorates, therefore the picture is not just blackened, it is actually disintegrating through the technique used. Aside from the folly of using bitumen, Géricault captures the pallid skin of the dying in the finest of details. Through his study in hospitals and morgues he was able to portray the range of colours in the skin as well as the textures.

Personally, I think Géricault has captured the balance between the horror of the event and the stark hope of rescue perfectly in this epic detailing of a point in history.