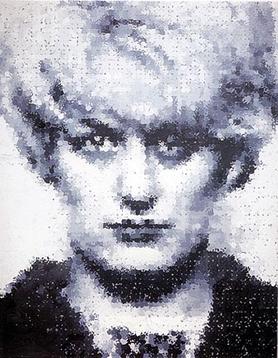 There are many evils in the world.  On a small scale… Anchovies.  On a larger scale war, murder, rape, abuse, bullying… we each have our own version of what evil looks like, yet we unite in the iconic images which represent an wrong done or atrocity created.  I think we can all pretty much agree that Hitler is one of the most well known faces, and is associated with utter carnage and despicable acts against many thousands of people.  But why do we use and recognise these people?  It could be argued that their images are still used in the media and in the art world today as a reference point and a reminder, it could be that to some degree we all have a morbid fascination with the acts that they committed, in a vain attempt to understand what drove them to behave in the way that they did.

I know I have readers all over the world, so that means, you may not necessarily know who Myra Hindley is, although if you are in the UK, there is no doubt you have come across this picture or the original press photo before.

Myra Hindley was an associate in the Moors murders between 1963 and 1965, around the location of Manchester – England.  The victims were five children between the ages of 10 – 17 who were sexually abused and then murdered.  Ian Brady and Myra Hindley were arrested in 1965, but only three victims were known about at that time, and it was only in 1985 that Brady admitted to more, the investigation was reopened.  Both assisted with the finding of the final resting place of their two previously unknown victims.

Hindley was dubbed “the most evil woman in Britain”, but she made many appeals against her life sentence throughout her incarceration, but she was never released and died at the age of 60 in 2002.  Ian Brady on the other hand was declared criminally insane, and made it clear that he never wanted to be released, dying in 2017 at the age of 79.

There are several views on the role of Hindley in these murders, some saying that she didn’t murder any of them, but she was blinded by love which made her follow Brady’s actions, while others see her as the driving force behind the killings.  Regardless of how much or little she took part in these acts, she was still present and didn’t stop them from taking place.

This then begs the question, why would Harvey want to create such a large and dynamic portrait of “the most evil women in Britain”?  The piece was created in 1995 and was displayed as part of the “Sensation” exhibit at the Royal Academy of Art in 1997.  The work is 9 by 11 foot and is a dominating piece to any exhibition area.

At the time of the exhibit, this piece was met with much controversy, with four members of the Royal Academy resigning in protest.  Prior to the opening the met police and vice units visited the display, but could find insufficient evidence of public indecency.  Charity Kidscape protested the piece on its opening day, saying that the Royal academy were using it as a way to draw in paying visitors to address their financial deficit.  By some parties (quite rightly), they felt that this was an exploitation and glorification of the murders which had been committed, and did not take in to account the feelings of the families and friends of those impacted.

On the other hand, Norman Rosenthal, secretary of the Royal Academy stated that it was the single most important piece in the exhibit and made for a sobering and cathartic experience.

The painting, at a glance, looks to be a highly magnified painting of the press photo which was plastered all over the tabloids everytime a story was run about the murderous couple.  On closer inspection, it is build up of tiny hand prints in white, black and grey.  This serves as a juxtaposition of innocences of those murdered to the atrocities committed by the adult in the painting.

A close up reveals how this piece has been brought together.

Many layers of the hand prints have been overlaid to present the final image of Hindley.  It is so precise in its replication of the photo, that is presents an ominous and imposing feel.  The fingers, when noticed, almost appear to be clawing…pleading against the face of Hindley.

Harvey said about the piece “I know enough to know that she probably didn’t do any of the murders, that she was just in a relationship where she was probably too attached to the man who was doing it to extricate herself. That her life was probably too dull and boring to throw the relationship away … I don’t believe that’s 30 years’ worth of reputation as one of the most vile and notorious murderers in British criminal history.”  Which I think is a rather misguided statement.

With all of this information, it is still difficult to ignore how this painting makes any viewer feel.  Such is the iconography of this woman that is fills its audience with a silent horror which is hard to verbalise.  If we look at this as simply a piece of art, it has done its job, evoked feelings through a visual medium, it challenges its audience’s perception of what it is seeing through the innocence of the hands to the notorious face. It dominates and it terrifies, with the stark image of the hardened face and peroxide bouffant, her unapologetic eyes staring out.  An unsympathetic moment to the victims families captured for an eternity.

Even now, this piece causes controversy, with threats and complaints still received over its existence.