Life is fragile isn’t it.  Nothing quite brings that home as much as a death of a loved one.  You realise that there are things that you took for granted from them – seeing them smile, listening to them moan, their little bad habits like turning the TV up too loud or snoring.  This, maybe only for a brief moment makes you appreciate everything around you – the birds singing, the colour of the sky, the perfect spider web, but as life goes on and you become accustomed to the loss, we perhaps lose sight of those little beautiful things again.  We get caught up in the drudgery of life… our jobs, family, paying bills and you forget to look up or out.  It’s much the same with nature.  We see adverts all the time in the UK to help the donkeys, documentaries run telling us of the dwindling figures of elephants and rhinos and other species which are on the edge of extinction, and we feel a moment of guilt, perhaps sadness, but then our attention is diverted again away from the fragility of life.

Now this is not some post to tell you about how we should be looking after the planet that we live on, or to appreciate your loved ones more, as frankly we all know the consequences of not looking after the planet and even our most loved family members can drive us to distraction at times. It is more a state of play statement which I think fits with this painting so well.

Bruno Pontiroli was born in 1981.  He lives and works in Paris and creates fantastical paintings which he describes:-

Nothing is to be taken seriously in his poems-images where Poetry dominates.
Pontiroli’s works have their own [sur]reality: the improbable becomes meaningful and the unlikely images never cease to amaze us.

If you abandon yourself to their light, you’ll be carried away into your own dreams.
Nobody sees the same thing.  Often children – and adults who are young at heart – enjoy a personal experience before his works.  Dream grey, night blue: in the full palette of sleep colours where dreams come to life, everything is possible.

He doesn’t particular think of his art as surrealism, because (and only based on what I have read about him) he doesn’t want to box himself in to a category.  Pontiroli more considers his work as things from an alternative reality.

While I can largely buy in to Pontiroli’s mentality of not conforming to one artistic genre, it is quite hard to ignore the influences of people like Salvador Dali in his images.  In the top right hand corner of the painting you can see Jesus on the cross jetting across the sky, almost in a homage to Dali’s “Christ of St John on the Cross” who looms over a harbour setting almost in the darkness of space with a clouded sky below him.

While Pontrioli says that his images are dream like, I do feel that they highlight the fragility of life that I was talking about earlier, heavily controlled and restrained by a human element.

The main element of “La Cour des Grands” is an elephant, it’s torso constricted by a dumpy naked man on it’s back.  The man’s legs twisted grimly.  The elephant wears a tiny crown, and its tusks removed, degraded from its greatness as it pulls at the head of an ostrich which has planted its head firmly in the snow somewhere off in the far left of the picture.

The elephant has a small audience of snow men, watching the spectacle, as the aforementioned Jesus leaves vapour trails across the clouded sky.

I find this such a sad image.  It is so telling of man’s grip of the creatures which we share the Earth with and how we are killing them with our actions.  I can’t ignore the obvious hints at ivory hunting, and the elephants crown, from this giant of the land now nothing more than a party hat.  The ostrich which its head in the snow being wrenched out by the elephant almost trying to make it take notice of the things we all stick our head in the sand about.  The very unnatural image of the elephant in a snowy domain, pointing a finger at environmental changes.  The snowmen represent for me the bystanders which see what is happening, yet can do nothing.  Finally the presences of the almost comedy Jesus, perhaps pointing at how religion is now a fading belief, yet man still is playing god with creatures which have no further say.

It’s a fantastical view of a starkly grim reality, which sits quite uncomfortably with me, yet I also find this image fascinating.

I don’t like to leave you all with a dower feeling, although this painting was too intriguing to pass up about writing about, so I have selected another of Pontrioli’s work to lighten the mood. 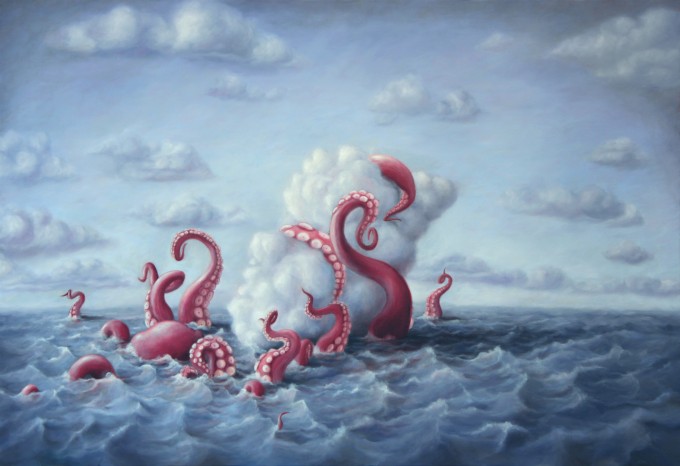 Anyone who knows me, will know I have an absolute love of the sea and the great creatures that lurk within its depths.  I love the juxtaposition of the octopus dragging a cloud down to the depths, almost like a lost treasure.  I also love how Pontiroli has given the sea such texture in his painting technique.  You can almost feel the biting sea breeze cutting across the top of the surface, making it choppy as the cloud is submersed.

What do you think of Pontrioli?  Do you see the fragility of life in his work?  Why not tell me in the comments?  Like this post?  Why not share it?

Want to see more of what I like?  You can find me on Facebook and Instagram under WidowCranky – join the page and add yourself to my group to be introduced to all sorts of inspired media!