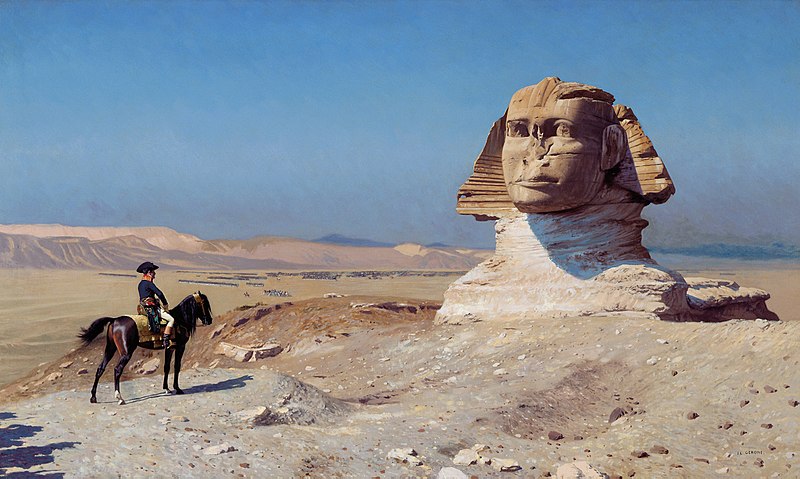 Life has been crazy busy recently, with studying for my Greek mythology course and writing the first assignment (which I have to say was a trial in itself for me as I am used to writing more than 500 words in a blog post, so why someone thinks that I could explain who has the greatest arete between Achilles and Odysseus is beyond me), I also have started to set and mount butterflies and insects (you know – just another side line), and complete a bit of a house overhaul… just because, and I squeeze this in to some of the other things I do on a regular basis… such as writing these posts.  What effectively happens is I get heavily drawn in to one thing, plan to write a post a bit later, but then find myself wondering where the time went.

Today’s painting is actually something which came up through my Greek course, and I found it incredibly interesting, so decided to share it with you.

Gerome lived between 1824 and 1904 and was a French painter and sculptor who worked in the style of academicism (a style which was produced under the influence of the standards of European academic art institutions).   Gerome covered a range of subjects such as history, orientalism and Greek mythology.

This painting covered two subjects for Gerome – history and Greek mythology.  The painting shows Napoleon on his horse, facing the great Egyptian sphinx.  The sphinx dominates the canvas as an overbearing and oppressive figure in the scene.  Napoleon in comparison is shown with handed rested on his leg while his horse is stationary, almost in a stand off to the sphinx.

The imagery in this is rather starkly astounding, with the cloudless sky and unusually the pyramids are not in view in this scene.

On the face of it, this painting looks as though it is commemorating  Napoleon’s efforts in Cairo, but this is drawing a symbolic reference between Oedipus and the liberation of Thebes to Napoleon and his perceived salvation of France.

Oedipus, was for all purposes the Prince of Thebes, but in a common twist of Greek mythological fate his father Laius had heard a prophecy that his son would kill him, so when his wife gave birth to a son, Laius pierced his ankles, and tethered them together so he wouldn’t be able to crawl and gave him to a servant to abandon.  The servant didn’t abandon the son (if you want something doing, you really do need to do it yourself), instead he handed the child to a shepherd, who in turn gave it to another shepherd, who then passed him on again until the child ended up with the King and Queen of Corinth.  They decided to keep the boy as their own.  Frankly Laius should have really known my now that if it is prophesied it will come true…

Oedipus was named as such after his swollen feet (endearing).

After some years (Oedipus was a young adult by this point), he was told by a drunk that his known parents were not his real parents. Disturbed at hearing this, he rushed back to his parents, who denied that they weren’t his parents. Oedipus, not one for taking people at their word, decided to visit the oracle at Delphi. The oracle gave the prophecy that Oedipus would kill his father and marry his mother, but never concluded who his birth parents were.

On hearing this Oedipus decided that he would not return to Corinth as he didn’t want to murder his father nor marry his mother and decided to go to the closer city of Thebes. As he travelled to the city he came to a cross roads, and argued with a man over who had the right of way (road rage did exist in Ancient Greece…), this ended with him killing the man.

Arriving at Thebes, Oedipus finds that they King (Laius) had recently been killed and the city was at the mercy of the sphinx. Who ever could defeat the sphinx would become King and marry the recently bereft Queen.

I have written about the sphinx before, but in the interest in story telling, the sphinx had riddles which it asked its opponents… if they couldn’t answer correctly, it would kill and eat the opponent. Oedipus successfully defeated the sphinx and became the King of Thebes, marrying the queen.

Years later, Oedipus is looking to end a plague which is ravaging Thebes, and he is trying to find out who killed Laius. He discovers that it was by his own hand that the king was killed at the cross roads, and that he has unintentionally married his own mother. On learning the truth, the queen hanged herself and Oedipus blinded himself with pins out of the hanged queens dress.

Oedipus is a fine example of a self fulfilling prophecy, although it might be a slight stretch of the imagination matching Napoleon to the tragic hero.

Gerome using the part of the story around the sphinx, likening Oedipus’s liberation of Thebes from the sphinx to the battle advances of Napoleon.

I love how this picture determines the sphinx as a dominating force, taking up such a large proportion of the canvas, Napoleon seeming to be the underdog in the scenario. There is a certain stillness to the activity, as if Napoleon is thinking of his next move. The only movement shown is the flick of the horses tail, indicating perhaps the action to come.

Gerome has masterfully likened the events in Cairo to the myth of Oedipus in this beautiful painting.

.
Sucker
Throw back to when Chihuly was displayed at Kew Gardens
Strange things appear to me
.
Industrial revolution
Worlds apart
.
.
.