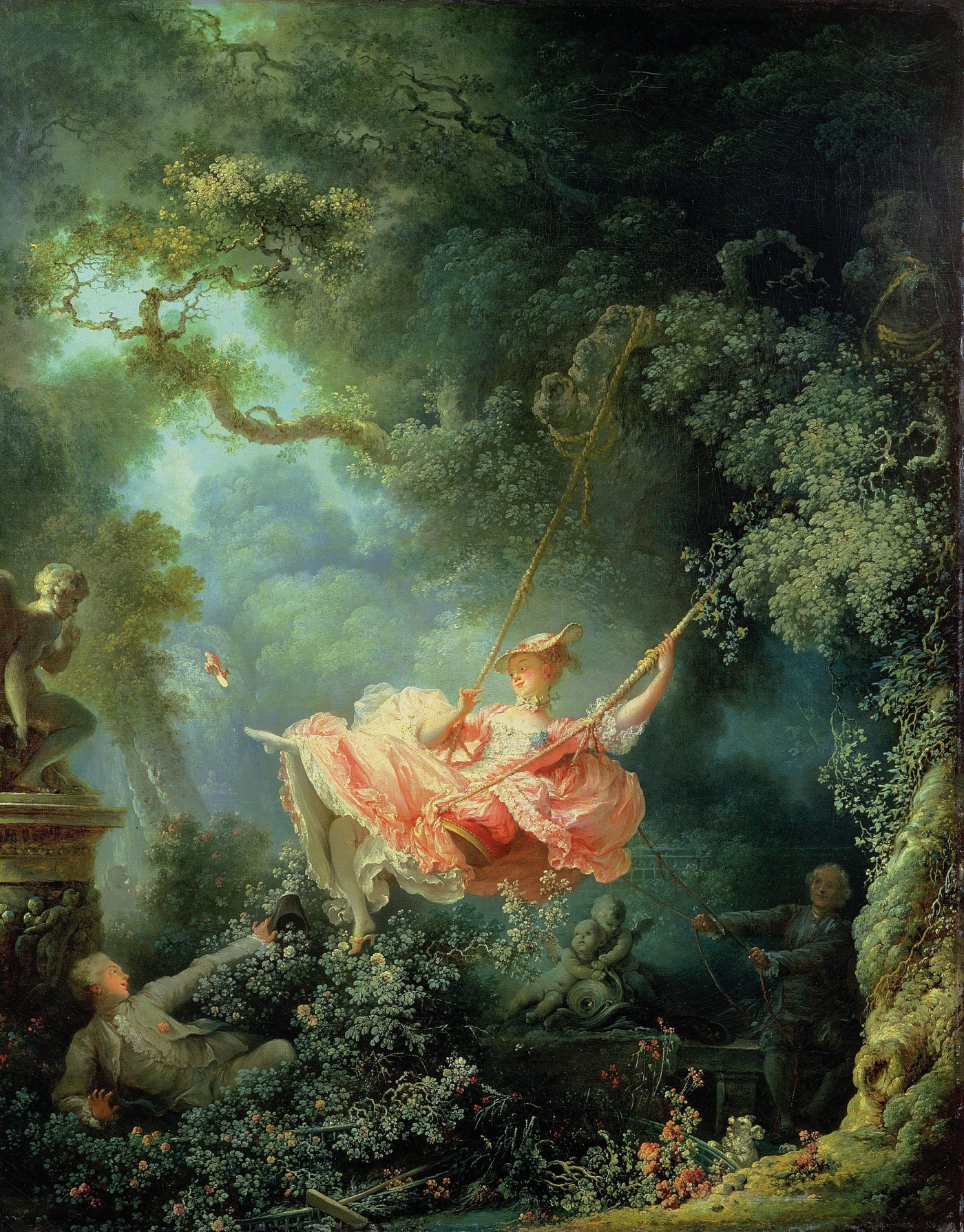 Well we are days away from the start of 2021, and while I do hope that the next year is more productive and less devastating that 2020 was, I also think we are in for a few more months of sitting around dreaming of when we can go out and ditch the ‘new normal’ in favour for the old normal.

While I am not particularly a people person, I am now longing for the time when we can at least socialise with people without having to stand on the door step or stand in a public place at a suitable distance away from one another, awkwardly talking about what we have been watching on Netflix.

In honour of times when we could all frolic in the park without worrying about being too close to anyone, I have selected this fun and widely misinterpreted painting to see in the New Year.

Fragonard was born in France in 1732. He was a painter and printmaker, who worked in the Rococo style and his work was known for tremendous frivolity, exuberance and hedonism. In his life time he created over 550 paintings (not including his drawings and etchings) of which only 5 are dated. His work conveys intimate atmospheres and veiled eroticism. Fragonard died in 1806 and he was almost unknown on his death as the French Revolution had deprived him of private patrons as they had either been killed or exiled. He remained forgotten for over half a century, being omitted from Wilhelm Lübke’s 1873 art history volume. It was only on later reevaluation of his work was he deemed one of the French masters of Rococo work.

Rococo is an exceptionally extravagant, ornamental and theatrical style of painting, architecture or decoration, which makes use of asymmetry, scrolling curves, gilding and pastel colours set against dark and brooding backdrops. The style accentuates expressions of movement which Fragonard excels at producing.

‘The Swing’, also known as ‘The Happy Accidents of the Swing’, is a playful and in-depth depiction of illicit sexual activities in the high classes which was commissions by Baron de Saint-Julien to depict him and his mistress, and he first asked Gabriel François Doyen to produce the piece, but uncomfortable with the subject, declined the work and Fragonard took up the request instead. Saint-Julien had requested that he be peering up his mistresses skirt and the swing was to be pushed by a Bishop, but Fragonard used artistic licence to produce the wonderful piece that can be seen today in the Wallace Collection in London.

At the centre of the painting you can see a beautiful woman in a billowing dress on a swing. She glides through the air with careless abandon as one shoe flies off of her foot from an extended leg. To her left, there is a young man in the bushes and to her right an older man pushes and controls the ropes of the swing. There is a statue to the left and a statue under the swinging woman. The whole painting is encompassed in heavy foliage of tress and bushes.

The Woman and the Young Man on the Left

Where do I begin here…? The sexual tension is electric isn’t it? Ok, well maybe not electric, but for the time of the painting, this was like reading the gossip column of your favourite celebrity magazine. The young man is hiding in the bush, only to be seen by the woman on the swing. He is holding out his hat with an extended arm into the bush. There are several interpretations of this action. The first is that hats were very often used to conceal erections during the fashion days of men in tight trousers, and he is holding it into the bush in a tongue in cheek indication of the pairs relationship. The second is that he is hiding his hat in the bush, close to where her shoe will land, so that they can have a secluded tryst as both go to find their lost apparel.

From the mans vantage point, he is also able to see the uncovered foot and ankle of the swinging woman, and get that unimaginable glimpse up her skirt to see her under garments. She looks down to him, acknowledging that he is there and playfully allows this to happen.

The Woman and the Older Man to the Right

The only tension that is in this relationship is the tension on the ropes of the string, probably indicating the older mans control of the woman. It is thought that this is likely to be her husband, who is blissfully unaware that he is being cuckolded as he is smiling as he swings his younger wife. What jumps to my mind is purse strings when I look at this, as he is well dressed and probably wealthy (which is why he has a younger wife). He is literally pushing her towards the young man, which be can’t see as the other suitor is hidden in the bushes.

The swing is a common symbol of fickleness or infidelity. The woman is going between her husband and her lover, in playful glee, her husband enabling the actions as he facilitates the movement of the swing.

The Statues and the Lap Dog

To the left edges of the painting, above the young man, and looking directly at the swinging woman, you can see a statue which is assumed to be Cupid. He has a finger raised to his lips indicating the secret love between the young man and the woman. At the centre of the painting you can see two more cherubs looking in different directions just below the swing. One is looking at the women swinging while the other looks away, as if trying not to see the illicit affair unfold. In front of the older man, you can a small white lap dog, which barks at the woman swinging. The dog is a symbol of loyalty, and the action of its barking is to alert his master to what is happening before him, but the older man ignores the dogs warning.

It is quite easy at first glance to feel that this is just a picture of a playful woman on a swing, but as you view it, more of the cheeky humour of Saint-Julien and Fragonard come forward. Which is possibly why this sexually explicit painting (for the time) was recreated as concept art for the Disney film ‘Tangled’. Lisa Keene the artist, took the central element of the painting and put Rapunzel on a swing kicking off her shoe in an act of female rebellion (rather than her sexuality). The artist associated with the colour pallet and playfulness with the painting, so as Disney does, they changed the meaning and produced a watered down version.

Fragonard mirrors the foliage of the painting in the movement of the woman’s dress, making the painting feel joyful and titillating. It is this attention to detail that makes Fragonard one of the Rococo masters.

I hope that 2021, brings you much playfulness and titillation, I wish you all a successful and happy New Year.