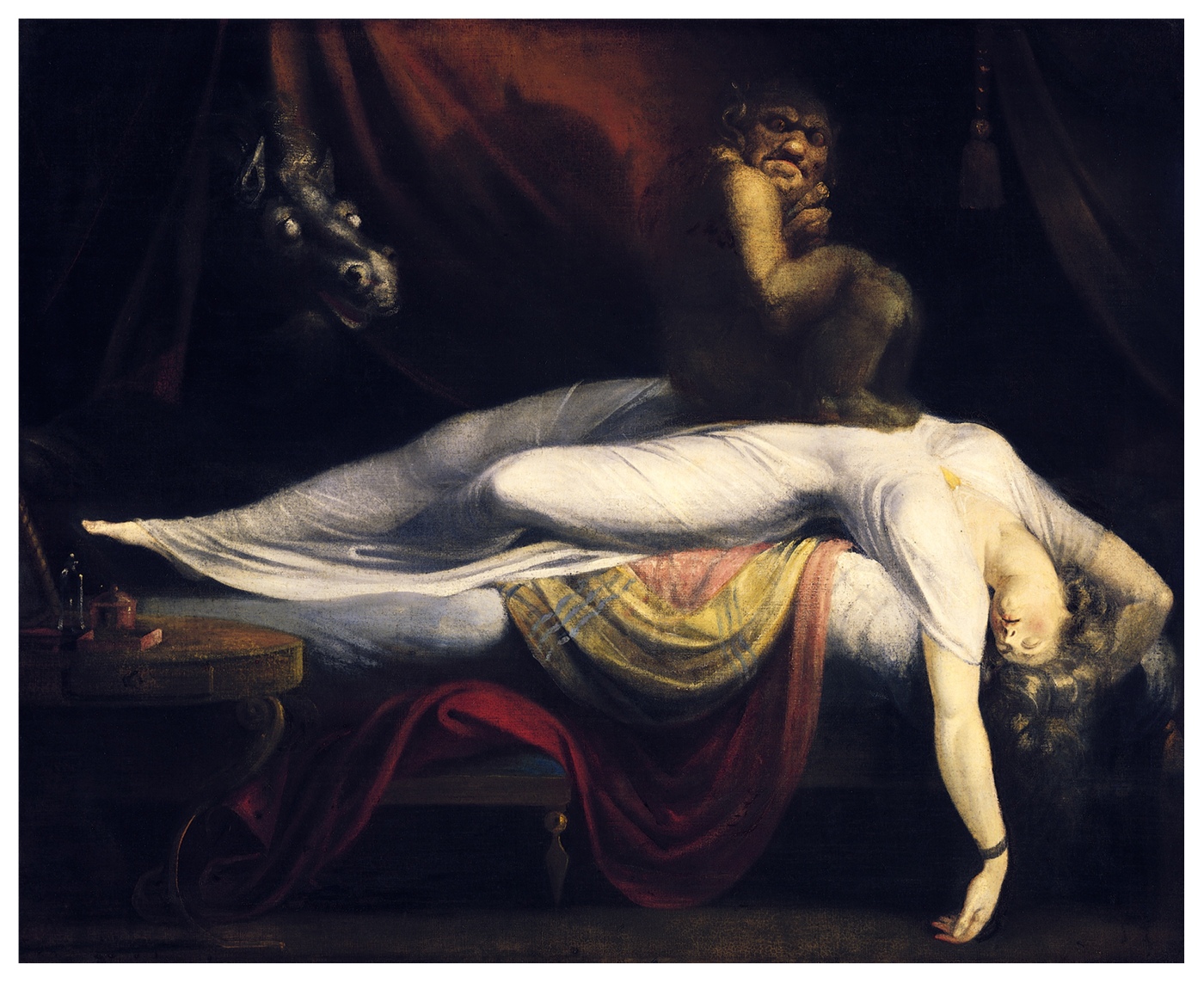 Here it is! 2021! We have finally put to bed the year that wasn’t, and yet we are still in some form of lockdown (even if we aren’t calling it that these days). I have found a new guilty pleasure though, while I am limited to hanging out at home and walking the dog, which is “Ghost Adventures”. This is literally four guys with video cameras and a load of paranormal tech, who go in search of ghosts in places which have been reported to be haunted. While I still sit on the fence about an afterlife and what it entails, this is fun watching.

What does happen a lot within “Ghost Adventures” is someone gets sort of possessed, or affected by an evil spirit or demon, which got me thinking about different types of demons and how they have been depicted in art work. Which then led me to write about one of the most famous works to show a demon in a seemingly every day setting.

Henry Fuseli was born in Zurich in 1741, and was the second of eighteen children. His father, Johann Caspar Fussli was a painter of landscapes and portraits and had designs on Fuseli devoting his life to the church, so he was sent to the Caroline College of Zurich where he received a first class classical education. It was here that he met Johann Kaspar Lavater.

In 1761, after taking holy orders, Fuseli was forced to leave the country as he had assisted his friend, Lavater, in exposing an unjust magistrate. The family of the magistrate were rich and powerful and sought revenge for this action, so Fuseli travelled through Germany and in 1765 ended up in England. Here he supported himself for some time writing, but eventually made friends with Sir Joshua Reynolds, who Fuseli showed his drawing too. Fuseli would take Reynolds advice and devote the rest of his life to art.

In 1770, Fuseli made an art pilgrimage to Italy and stayed there until 1778. He then travelled back to England via Zurich in 1779 to find he had a commission from Alderman Boydell on his return. Boydell was setting up his Shakespeare Gallery at the time, and Fuseli completed a number of commissions from him.

In 1788 Fuseli married Sophia Rawlins, and became an associate of the Royal Academy. Mary Wollstonecraft, whose portrait Fuseli had painted, planned a trip to Paris with him, but she pursued him so vehemently that Sophia had to step in and put a stop to her contact with Fuseli. Fuseli was later recorded as saying that he hated clever women as they only cause trouble.

In 1790 he became a full Academician, presenting “Thor Battering the Midgard Serpent” as his diploma work. In 1799 he was appointed professor of painting at the Royal Academy, and four years later he was chosen as the Keeper, to which he resigned his professor role. In 1810 he resumed being a professor and kept the Keeper role as well until his death in 1825.

Fuseli seemed destined to be part of the art world, and he is firmly planted in the Romanticism movement. This movement is defined by emphasising inspiration and subjectivity, and it is characterised by the glorification of nature, awareness and acceptance of emotions, emphasis on aesthetic beauty and have spiritual and supernatural elements.

You may wonder then how a picture which seems only to be aesthetically pleasing in part could be one of the most popular paintings of the late 1700s.

The painting shows a woman in the midst of a dream on a bed (although to me it does look like she is slightly levitating, otherwise you wouldn’t be able to see the curves of her body as you can in the painting), on her chest an incubus sits. The room is draped in heavy red curtains from which a horse emerges. There is a small table by the bed which has a mirror, a phial and a book on it.

At first it might seem that this is a heavy pun for a nightmare, with the presence of the horses head, but actually this isn’t the case. It is more to destabilise the painting and give the feel of a waking dream. Due to the lighting technique of the painting, with a single light source to the right of the piece, it is actually quite hard to determine the colour of the horse. Initially it seems black, but it has white eyes and highlights where the light catches it. When I look at this painting, the horse has always felt to me like the presence of death, as we know death rides a pale horse…

The meaning of mare at the time of painting wasn’t just a female horse, but it was also an evil spirit derived from the Scandinavian word ‘mara’. The myth around this spirit was that it was sent to suffocate people in their sleep. The early meaning of nightmare included sleepers experiences with a weight on their chest combined with sleep paralysis or a feeling of dread, so on a practical level, the demon on the woman’s chest, could really be a physical depiction of afflictions during sleep.

On a more spiritual level, the demon or incubus was seen as a demon that would plague single sleepers (usually women as the succubus would visit men), initiating sexual intercourse with their chosen, this would lead to issues with mental health, physical health or even death. The demon faces the audience in a theatrical style, almost contemplating its next move on the sleeping woman, presenting an element of terror for views of the painting.

The woman, is the only element completely light in this painting, and her physical appearance highlights her sexuality. The curves of her body are easily seen through the white nightdress that she wears. This titillated viewers when it was first hung in the Royal Academy in 1782. Her arms are flung back, in a common stance for sleep paralysis, and she exposes her neck for the demons taking. The couple represent the ever present fight against good and evil.

The paintings setting is heavily dramatic, the red curtains which seem to represent rivers of blood, to the shallow depth, which makes the scene look as though it is staged, give the sense of theatre to its viewers. The lighting of the work heightens the sense of dread and uncertainty as the horse and demon could feminism into the shadows at any time. The juxtaposition of the light and darkness, perhaps shows the futility of the situation. We have all had those nightmares where you wake and still feel that you are in it, no matter how much light there is around you. Fuseli captures that feeling where there is little explanation for the darker realms which are present.

This painting was so popular after its first showing, that Thomas Burke rushed to create an engraving plate of it, so that it could be mass distributed. This work became a an icon of romanticism and a defining image of gothic horror, inspiring writers such as Mary Shelley and Edgar Allan Poe. Later it would hold inspiration for psychiatrists such as Freud who had a copy of the painting hung in his apartment.

Fuseli expertly combines images within this piece to present something we have all experienced, but probably struggle to describe in great detail. It shows the myths of people who slept alone, the fear that is felt after a nightmare, and the excitement of what a night could bring. It is no wonder that audiences were so excited by this painting.